As Mark explained in his video in Step 1.6, the United Nations is one of the key organisations working on an international scale. One of the most important, and ambitious, global projects they have are the Sustainable Development Goals. 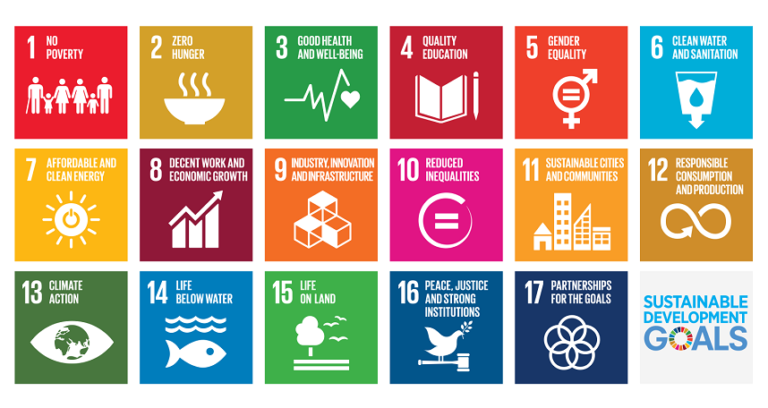 The United Nations in a nutshell

The United Nations (UN) is one very well-known example of an organisation acting on a global scale. Since its founding in 1945, the UN and its 193 members have been striving to uphold the principles in its charter, and help governments solve problems together. It aims to take action on the most pressing global issues humanity faces today, including peace and security, climate change, sustainable development, human rights, disarmament, terrorism, humanitarian and health emergencies, gender equality, governance, and food production.

In the year 2000, the Millennium Declaration was adopted by the largest gathering of world leaders in history. It committed these nations to working together in partnership to achieve a series of targets by the year 2015. These targets become known as the Millennium Development Goals (MDGs), and were focused on addressing extreme poverty in the world, through topics such as promoting equality, reducing child mortality, eradicating hunger, ensuring environmental sustainability, and combating diseases such as HIV/AIDS and malaria. You can find out more about these goals by following the ‘See Also’ links at the bottom of this page.

By the 2015 deadline, there were great successes. The UN reported that between 1990 and 2002, the number of people in extreme poverty fell by an estimated 130 million. Child mortality rates fell as we will explore in more detail later in the course, and life expectancy rose. Yet, this wasn’t consistent across the world, and there are huge variations between countries, and between urban and rural areas.

Clearly, more work was needed. To continue the work of the MDGs, and update them for the world today, the Sustainable Development Goals (SDGs) were adopted on the 25th of September 2015 as part of a new sustainable development agenda. The SDGs are a plan of action focused on five areas – people, planet, prosperity, peace and partnership – by the deadline of 2030.

For people, they aim to end poverty and hunger, in all their forms, and to ensure that all people across the world can fulfil their full potential, ensuring dignity, equality and a healthy environment.

For the planet, the goals are designed to protect the planet from further environmental degradation, by sustainably managing resources and taking urgent action on climate change.

In terms of prosperity, to ensure that everyone can enjoy prosperous and fulfilling lives. But in such a way that economic, social and technological progress happens in harmony with the natural world.

For peace the goal is to promote and ensure peaceful, just and inclusive societies, where people can live free from fear and violence.

Partnership is about mobilising the means required to implement this agenda through a commitment to the Global Partnership for Sustainable Development.

These areas are broken down further, into 17 goals:

The UN says that:

“For the goals to be reached, everyone needs to do their part: governments, the private sector, civil society and people like you”.

What do you think about the SDGs?

So, what do you think about the SDGs? You will be able to explore the goals in more detail in the next exercise, but before you do so, consider your initial reactions to these goals and join the discussion in the comments: