The two faces of the Emperor Hadrian. 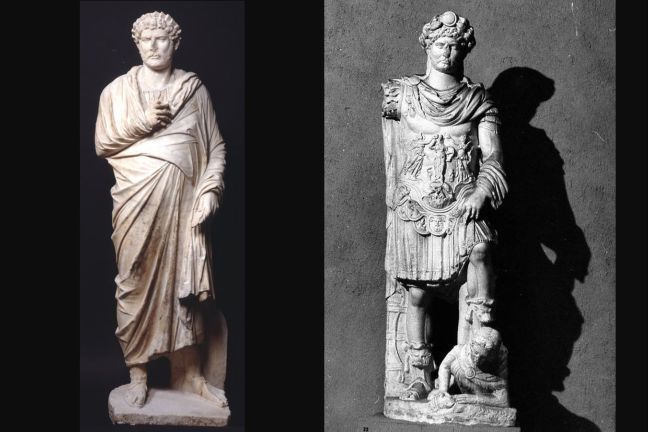 Hadrian – scholar, traveller, architect and aesthete – Emperor of the Roman world from AD 117 to AD 138, a man steeped in the learning of the Greeks and fascinated by the mysteries of the East. Hadrian has gone down in history as a ruler capable of pragmatism, knowing when to set the boundaries of empire and when to expand them, engaging provincial subjects and not simply the inhabitants of the great city of Rome. To his reign belong many of the Empire’s most remarkable building projects, and the growth and renewal of many cities. Yet this is only one aspect of Hadrian, and how he ruled. Alongside the civilised values the Emperor espoused, there was also barbarism: we’ll encounter both up close together over the next few weeks. Hadrian built a wall in Britain, his biographer tells us, to separate the Romans from the ‘barbarians’ (Historia Augusta, Life of Hadrian 11.2). This name (which has since given us the terms barbaric, barbarous, barbarism) referred to peoples outside the civilised Empire. In fact there were ways in which the Emperor used his power that we today would think of as barbaric. This includes actions taken by Hadrian and his imperial agents at the time he built Hadrian’s Wall. The Emperor of Rome was both a dictator and the commander of Rome’s armies. Roman soldiers swore allegiance to him, not to the Roman people. They swore to do the Emperor’s bidding; protecting the Empire’s subjects was neither their priority, nor their rationale. When the Emperor’s subjects resisted him, the consequences could be bloody and barbarous. The image to the right offers a rather different image of Hadrian. It comes from Hierapytna (Crete), and depicts an armoured Hadrian standing upon a defeated enemy. From the perspective of many in Rome (not least Hadrian himself) this kind of savagery was an essential part of Imperial rule, and the building and governing of Empire. Violence and terror were legitimate tools to suppress revolt. Hadrian certainly encountered revolt on a dramatic scale; forty years after the construction of Hadrian’s Wall began, the writer Cornelius Fronto recalls the extraordinary numbers of soldiers killed by the Britons and those in rebellion across the Jewish Diaspora during Hadrian’s reign (de Bello Parthico 2). No contemporary accounts survive of the wars with the Britons, but ancient sources do suggest that Hadrian tragically inflicted terrible suffering upon the Jewish peoples. Cassius Dio (Cassius Dio History of Rome 69.12.1-16.14.3 available online) claims that the suppression of the Jewish revolt left 580,000 dead, and that 50 of their fortified towns and 985 of their villages were destroyed. As further punishment, they were not even allowed to bury their dead or to enter their holiest city, Jerusalem. All this raises questions about what Hadrian did in Britain upon meeting resistance. The fact that these two conflicts were regarded as comparable raises tantalizing and terrifying questions, as indeed does the fact that following the suppression of trouble in Britain, Hadrian sent the governor of Britain to Judea to help restore Roman control. Ancient writers are otherwise silent about what happened in Britain – but one extraordinary legacy of this time endures, Hadrian’s Wall.

View Course
Over the forthcoming weeks, we will: As for Hadrian, you may be surprised to know that the statue on the left is an incorrect restoration put together in the nineteenth century from parts of several different statues. For all his well-documented love of Greece, its philosophy and civilisation, we actually have no surviving statues showing Hadrian in Greek dress. By contrast, there are several striking examples of him in armour. The statue on the right is authentic. Answer these questions in the comments below. You might like to read what others have said before you add your own thoughts.
© Newcastle University