What does aerial photography tell us about the Roman advance?

What can aerial photography tell us about the Romans in Northern Britain?
View transcript
8.1
Aerial survey has told us an awful lot about the campaigns of the Romans north of Hadrian’s Wall. Photographs that are taken from airplanes can show us differential things in the summer months. They show us aspects of the campaigns of the Roman army that are invisible to the eye when you’re standing on the ground. But crops grow differently over the features in the summer months, and buried ditches will give us deeper crop growth, more moisture, meaning the crops grow taller, and they change colour at different times.
38.7
And it is these differences that we can pick up from the photographs that we take that tell us more about the activities of the Romans in Scotland, and in all areas north of Hadrian’s Wall. Here, we’ve got the fort at Newstead, which is on the A68 Dere Street coming into Scotland. We’ve got the Trimontium Hills– the Eildon Hills here. We’ve got a Roman fort here, which you can really only see properly in the summer months, and is surrounded by a succession of marching camps.
66.8
The fort was occupied during different campaigns of the Romans in Scotland, as were the camps, and we’ve got a character of aspects of the Roman invasions coming through in just this one site through this bend in the river Tweed. Here, we’ve got the remains of a Roman camp in Perthshire in Scotland, and you’ve got darker features here, which is the ditch that would’ve gone around the boundary demarcating the outside of the camp here. And you can see specific aspects here, which are the remains of gateways, and these are particular types of Roman entrances that they built on these camps.
104.1
And you’ve got to imagine inside here rows upon rows of leather tents, and here you can see a whole succession of little pits that are in a line. And what you would have had is a row of tents running down here, and these would have been ovens for cooking. But also, pits for rubbish disposal, and potentially toilets for the Romans to dispose of everything. And this would have been occupied by Roman soldiers for a night, a few nights, maybe a week or more, but for a very short period while they’re campaigning in Scotland.

For those unfortunate enough to witness its terrifying onslaught, the passage of Rome’s campaigning army must have been striking. Smoke curling up where villages had once stood, crows circling sites littered with corpses, the detritus left by the passage of thousands of soldiers. Rome’s public monuments openly depict the brutality that accompanied her conquests, but almost two millennia later, we use very different clues to track her soldiers’ murderous routes through northern Britain. Yet, there are clues. We have just discussed the literary sources, noting that while they are essential reading, they have multiple limitations. And of course ancient writers did not really seek to give a detailed account of strategy or topography. They did not desire to act as war correspondents. The fast pace of campaigning armies can mean that little endures of their passing for archaeologists to find. But Roman soldiers built temporary camps as they advanced into Scotland. Few of these contained internal buildings (tents sufficed) but ramparts were required to keep the enemy out and deserters in. These ramparts and their accompanying ditches survive. Eroded, diminished by centuries of ploughing, they can be hard to see from ground. From the air things look very different. An archaeologist trained in aerial reconnaissance can identify the tell-tale ‘ground responses’, the visual clues, that show the presence of even short-lived campaign camps. There are three basic types of ‘ground response’: shadow, soil colour and crop mark. From the air it is possible to see the play of shadow on undulations in the ground over a larger area, making it possible, for example, to detect systems of banks and ditches. This ground response can be strong in low light conditions, and/or when there is snow or frost. Soil marks sometimes show the presence of buried structures, particularly after ploughing, which brings elements of the buried feature to the surface. The problem with soil marks is that they indicate that the archaeological feature is being actively destroyed. Crop marks are the third type of ground response. Crop growth will be affected by what lies beneath the ground: a nice moist ancient ditch will foster growth, while an old stone wall will inhibit development. 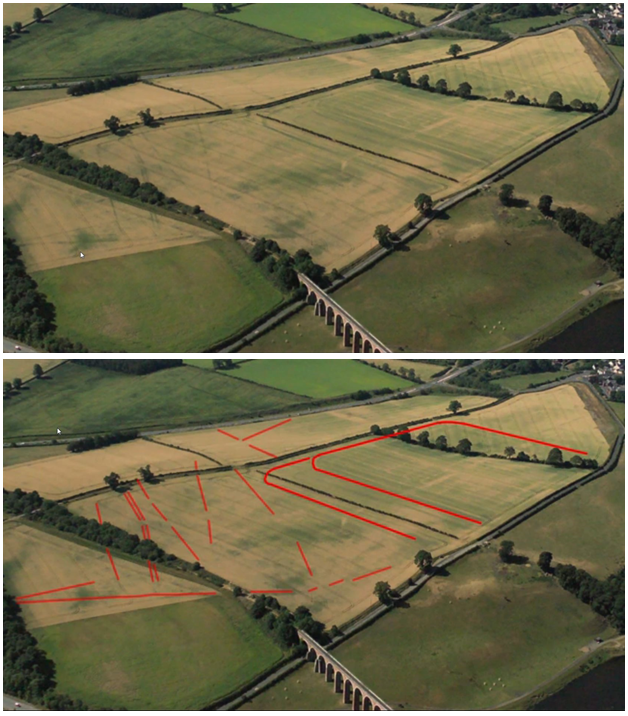 These stills from the video show the evidence of crop marks at Newstead on the Scottish Borders. The red lines in the bottom still highlight the crop marks, which are visible as dark lines in the first still. Newstead photo © The Royal Commission on the Ancient and Historical Monuments of Scotland

View Course
Dr Rebecca Jones is Head of Archaeology Strategy at Historic Scotland, and a Newcastle University graduate. She is a specialist in aerial photography and Roman camps. Her book, (2012) Roman Camps in Britain, published by Amberly (ISBN 1848686889), is recommended for anyone trying to understand these extraordinary testimonies to Rome’s campaigns in northern Britain.