The road before the Wall: excavating the Stanegate at Vindolanda

Explanation of the work at Vindolanda and what this tells us about the Stanegate
View transcript
9.2
So we are here at Vindolanda, the very heart of the Roman frontier, the heart of the border of the Roman Empire here. And a fort which starts in the Stanegate Period, long before Hadrian’s Wall was constructed. And specifically where I’m sitting is in the village outside the walls of the last stone fort, and under this village we’ve got the enormous Stanegate Forts that predated Hadrian’s Wall, buried under metres of later Roman occupation. Those metres of later Roman buildings create anaerobic layers, oxygen-free environments, where practically anything that they leave behind from the early forts survives in more or less the same condition that it was pulled out of the ground in.
45.9
Now this includes thousands of boots and shoes, textiles, all manner of organic artefacts, as well as inorganic, and of course most importantly, writing tablets– little documents, letters, postcards from the past, which give us direct connections to the Roman people who lived here almost 2000 years ago. Each one of those documents is unique. Each one is incredibly special, because it’s an unbeatable perspective on life from the very beginning of the Roman occupation of the north of Britain. And of course, we keep finding them. And indeed, on the excavations where I’m sitting at the moment, we hope to find another 200 or 300 of those documents this year. And who knows what kind of secrets they’re going to give us?
84.7
Now the Stanegate Road, the road that run past Vindolanda from the very beginning of the occupation, is effectively the network which links everything together in this part of the world. It’s a fantastic road, it’s a fantastic street. And the forts behind it were full of mixed communities– soldiers, families, slaves, all sorts of people, merchants, and of course, local people, too, coming together in this military endeavour, this experiment of a frontier in the north of Britain. Now at Vindolanda they built something like nine separate forts on top of each other, giving us a wealth of different types of information about different peoples. And the Stanegate Road isn’t something that’s abandoned once Hadrian’s Wall is built.
122.2
In fact, it helps to facilitate the construction of Hadrian’s Wall as an integral part of that frontier system, going forward from that point onwards. Vindolanda and the forts of the Stanegate, some of them at least, remain important right the way through the whole history of Roman Britain and beyond– into what happens next when the Roman frontier is abandoned by the Roman army. Vindolanda Stanegate forts, Hadrian’s Wall forts. Quite a few seem to keep on going. They keep marching on for another 200 or 300 years, before they’re completely abandoned. Now we have a huge job on our hands here at Vindolanda, as we do on most of the frontier forts and settlements to try work out exactly what went on.
161.2
It’s a wonderful challenge and the best is yet to come.

Roman commanders were well aware of the strategic importance of the River Tyne, to the east, and the River Solway, to the west, long before Hadrian’s Wall was constructed. Excavations at Corbridge, where a major road (Dere Street) built to support the army’s northern campaigns crossed the Tyne, and at Carlisle, which lay at the head of the Solway Estuary, show that major forts were established at both sites in the early AD 70s. And crucially both were linked by an east-west road which endured into the medieval period when it became known as the Stanegate. Other forts, most famously Vindolanda, along with towers and fortlets were established on this road. 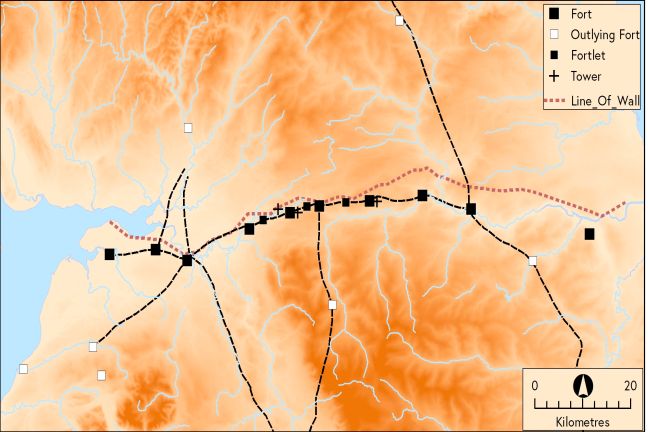 A map showing the Stanegate. The line later followed by Hadrian’s Wall is represented by a dashed line. © Newcastle University Larger version of the Stanegate map In this video, Dr Andrew Birley, Director of Excavations for the Vindolanda Trust discusses the evidence for this earlier period of activity discovered during excavations at his site. This evidence includes the celebrated writing tablets, which we will be discussing in the next few steps. Note how complex the Vindolanda site is, and how many phases of Roman occupation overlie the waterlogged deposits which date from before the Wall, to the time when the Stanegate road marked the line of Roman control along the Tyne-Solway Isthmus.