Skip main navigation
Home / History / The History of the Book in the Early Modern Period: 1450 to 1800 / Books and censorship

This article looks at books and censorship.
© Trinity College Dublin

When we think about censorship of books in early modern Europe what immediately comes to mind is the Index. Published by the papacy in 1559, the Index was used to identify what books to censor and was later incorporated by the Council of Trent into its counter-reformation strategy. 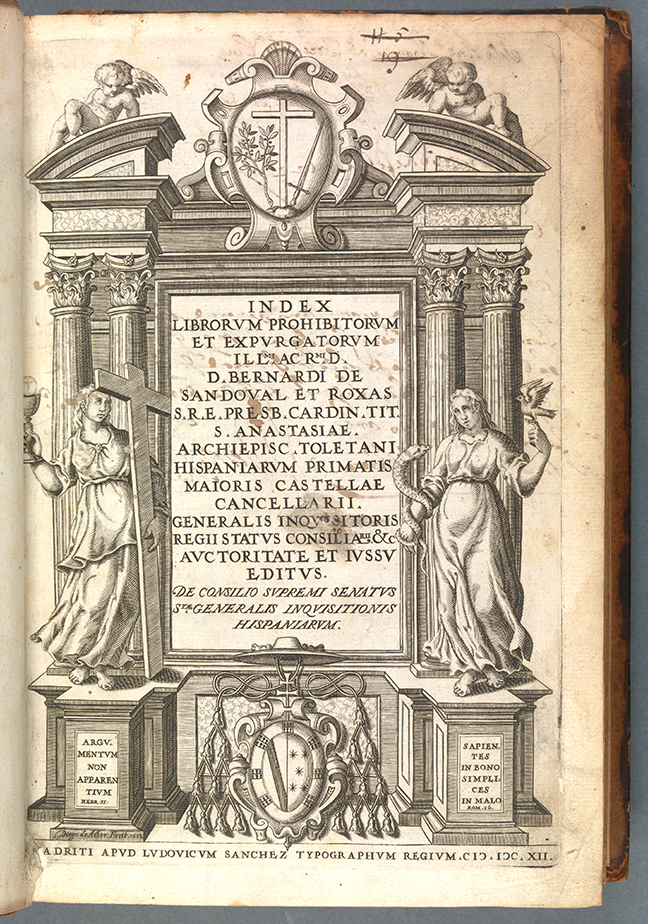 Index writers didn’t just concentrate on specific books. As the following image shows, they could, and did, include all the works of an author or simply specific sentences in certain books. The first name on the list here, ‘Abdias Liberinus’, was a protestant author, based in Zürich, whose interpretation of the eucharist in his Syntagma universae, de sacrosancta coena domini… (Zürich, 1560), had angered the papal authorities. 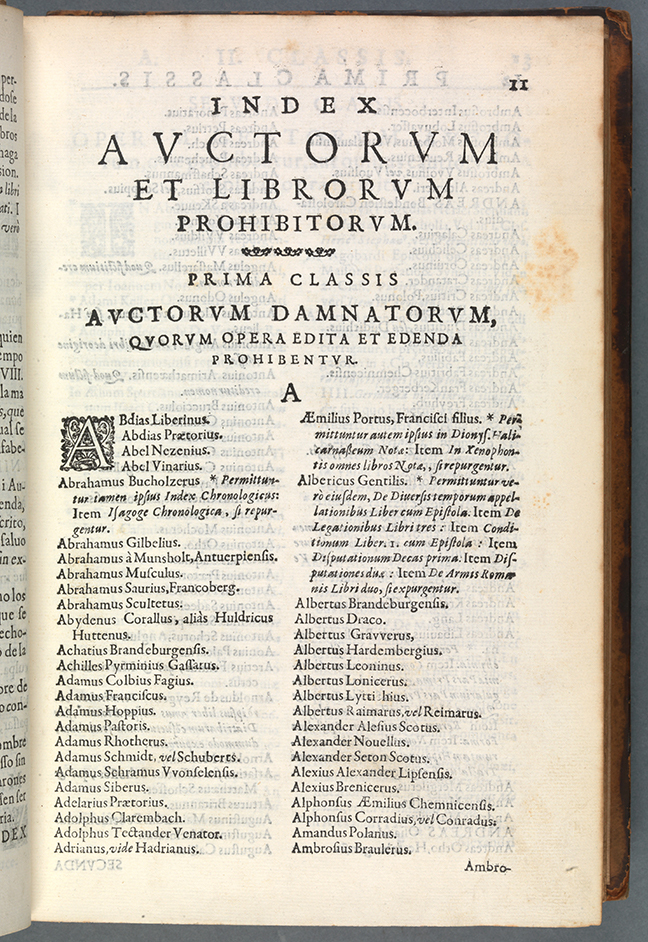 The Index was designed to be the core text of censorship throughout Catholic Europe. This was reflected in the text itself, which did its best to reflect the international nature of the Roman Catholic church. Inevitably, there were regional variations which were reflected in the implementation rates. The Spanish Inquisition, for example, devoted its bureaucracy to impose censorship and prosecutions were higher there than elsewhere in Europe. 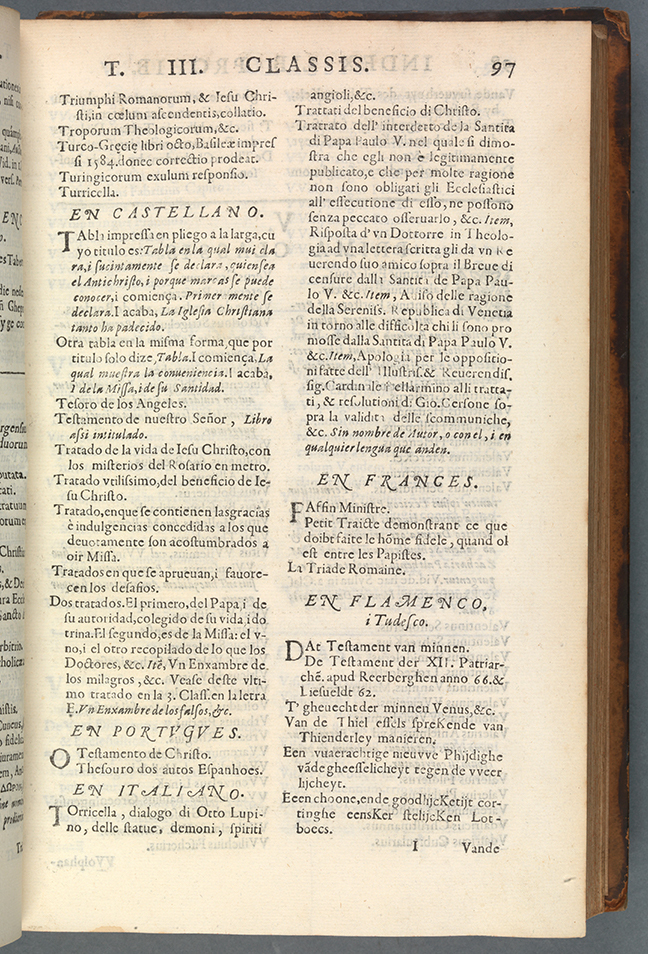 The Church was not alone in attempting to regulate the book trade. The State also tried various ways to curb the power of the printing press. In 1521, at the Diet of Worms, Emperor Charles V (1500-58), endorsed a ‘Law of Printing’ which was designed to combat the flood of Lutheran publications in the first few years of the Reformation. In England, too, the crown made efforts to curb what it termed seditious (i.e. rebellious) and heretical printing. They did this by ‘licensing’ which gave ecclesiastical commissioners the right to inspect manuscripts before they reached the printing press. In the France of Louis XIV (1638-1715) this type of ‘pre-publication’ censorship was the norm.

Such decrees were clearly an attempt to introduce censorship to avoid seditious and heretical texts from being printed. But how effective were they? The answer to this question depends on three factors:

In other words, decrees were one thing – imposing them quite another. Printers and authors could and did move to more tolerant countries – and their publications could be smuggled back into their home countries. The clandestine book trade was alive and well in early modern Europe. 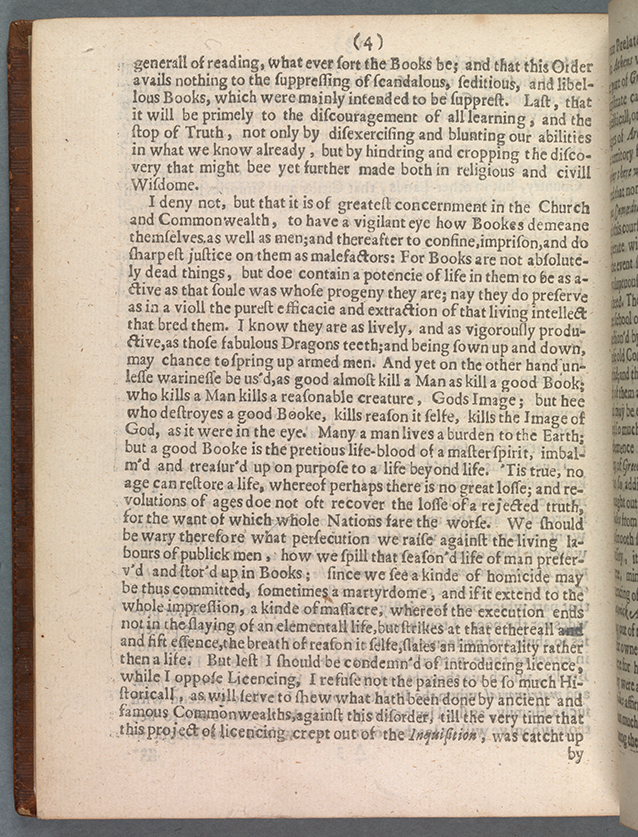 Licensing (i.e. pre-publication censorship) did not go un-challenged. Perhaps the most famous attack was John Milton’s Areopagitica of 1644. In this image we see his moving statement that ‘hee who destroyes a good Booke, kills reason it selfe, kills the Image of God, as it were in the eye’. Milton’s text is often taken as a call to arms for full freedom of the press but we should remember that his target was licensing – a point made clear by the full title of his work: Areopagitica; A Speech of John Milton For the Liberty of Unlicenc’d Printing. To the Parliament of England. He accepted post-publication censorship, especially of works by Roman Catholic writers. In other words, Milton’s problem with censorship was not that it existed but how it was being carried out.