With fossils from such a diverse background, several dating methods have been used for the evidence from Jebel Irhoud. 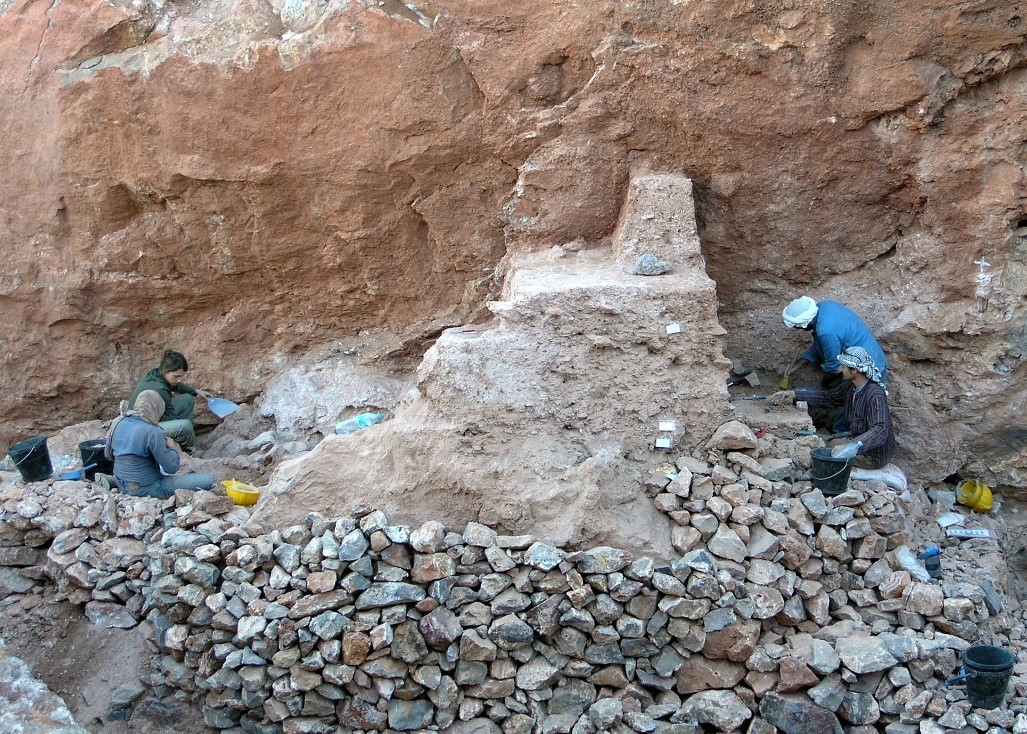 With fossils from such a diverse background, several dating methods have been used for the evidence from Jebel Irhoud. In the 1960s, when the hominin fossils were originally discovered at Jebel Irhoud, they weren’t really understood. Early descriptions focused upon physical similarities with Neanderthals. They were thought to represent an ‘African Neanderthal’ and were guessed to be around 40,000 years old (Hublin et al., 2017; Smith et al., 2007). Early C-14 dating suggested an age greater than 30,000 years (Ennouchi, 1966).This ‘African Neanderthal’ explanation was contested by other researchers, who noted the similarities with modern humans and suggested that these remains might be samples from a species that predated Homo sapiens, and was eventually replaced by H. sapiens migrating from the south (Callaway, 2017; Hublin, 1992). Others considered them to be primitive forms of H. sapiens themselves (Richter et al., 2017).Modern studies on the morphology of the Jebel Irhoud fossils note that the face and teeth of the fossils look like modern humans, while the braincase still shows a more archaic, elongated shape (Hublin et al., 2017).Tanya and Rainer were part of a team that performed research on the juvenile human mandible (Irhoud 3). They concluded that whereas development time of the earlier Homo is closer to African apes, the development time of this child from Jebel Irhoud was more similar to modern Homo sapiens (Smith et al., 2007). The child was growing at the same rate as modern humans. 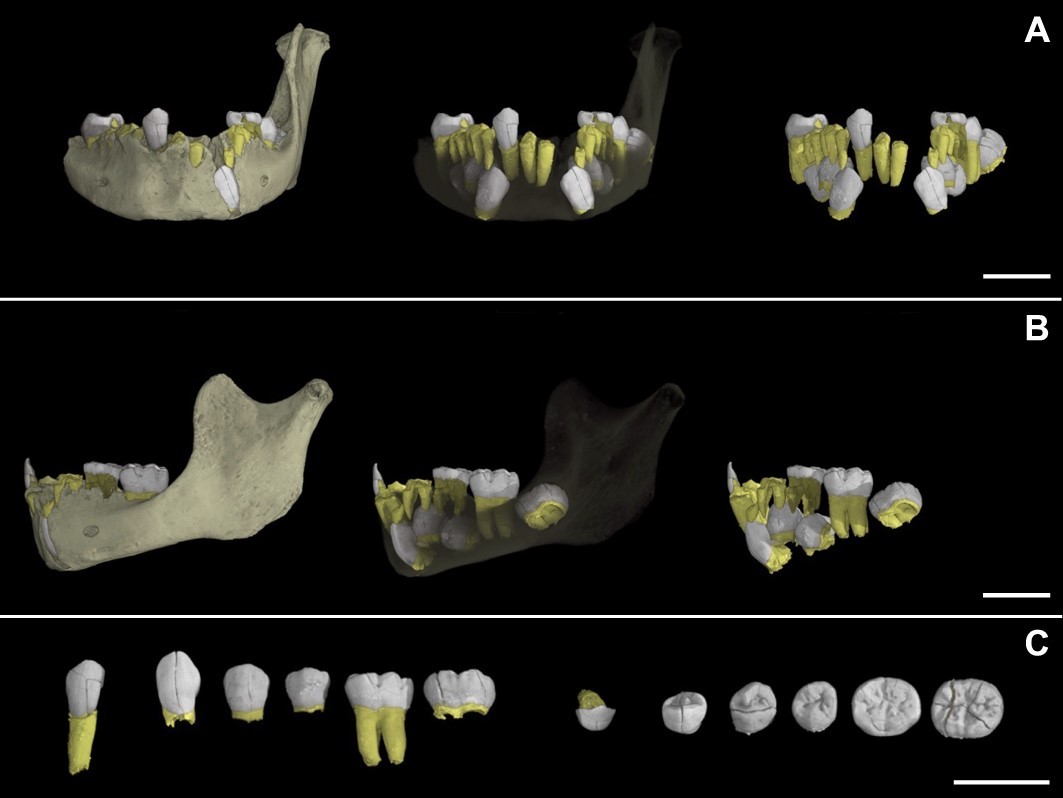 Diagrams from Tanya’s study of the Irhoud 3 fossil. (Diagrams Tanya Smith and Proceedings of the National Academy of Sciences of the United States of America.) Tanya has recently published a book about her fascinating research on teeth and the tales they tell about human development – details are in ‘See Also’ at the foot of this page.

You are by now familiar with the principles of direct and indirect dating. Since we don’t have any associated archaeological material from the earlier fossil finds at Jebel Irhoud (and are not even certain of exactly where they were found on the site), we cannot apply indirect dating methods to these earlier finds. All we have are the fossils themselves, and the general site where they were found.

View Course
In 2007, when Rainer and his team worked on direct dating the juvenile human mandible (Irhoud 3), they used a combination of ESR and U-series dating methods. You have considered both of these methods already and will understand some of the challenges faced by the team.Rainer used the laser ablation ICP-MS U-series method (you have seen this demonstrated last week in Step 1.14) to identify the uranium distribution in the enamel and dentine of a small tooth fragment that was removed from the mandible. The dentine was analysed to provide the ratio between the Uranium (U-234) and the Thorium (Th-230).

But where did it come from?

Now at this point, they had a challenge. Remember that we said for U-series dating we need to reconstruct the uptake of uranium into the fossil using a diffusion-absorption (DA) model? They didn’t know exactly where the fossil had been located on the site, so it wasn’t possible to model uranium uptake for the fossil. However, in this instance, the concentration of uranium in the enamel and dentine was so low that there was no need to depend upon any such modelling. So, instead, they reported an apparent closed system age, where it is assumed that the fossil was not subjected to uranium migration over the millennia. This gave an apparent age of 124 ± 3 ka, or 121,000 to 127,000 years.The next step was using ESR dating to measure the piece of enamel taken from the tooth (we looked at this process last week in Step 1.15). You may remember that to arrive at an ESR date we need to identify the radioactive dose and the dose rate. The dose rate requires us to assess the internal dose rate and the external dose rate. This external dose rate required samples from the site where the fossil was located. In 1969, the archaeologist who recovered the fossil reported that it had been located 1.4m above the cave floor, near the bottom of the excavated section. So, this is what they worked with – using sediment from that height, whilst acknowledging that this was an uncertain stratigraphic context. They analysed samples of the matrix from that layer and adjusted the external rate to allow for possible shielding.By applying a combined U-series/ESR dating methodology in 2007, Rainer and the team obtained an age of 160,000 ± 16,000 years. This whole dating process and the work on determining the growth rate of this ancient child is described in Smith et al. (2007) – you can see the study here. This obtained date was consistent with ESR dating analysis that Rainer had carried out some years earlier on animal teeth from Jebel Irhoud (Grün and Stringer, 1991).The later finds from 2004 onwards present us with a much different situation. All of that preserved archaeological material and the associated geological deposits allow us to establish a precise chronology of the stratigraphy – and provide indirect dating methods to the fossils and artifacts found in those layers.

What is more, with the sole exception of a single tooth, all the newly-discovered hominin fossils were located in a single stratigraphic layer (Layer 7). This layer also included most of the stone tools and animal remains that were recovered. This gives us an area of stratigraphic focus for the fossil remains from Jebel Irhoud. Descriptions of the finding of two of the earlier fossils also correlate to Layer 7. Even though it’s not possible to make a strict correlation for all of the other earlier fossil finds, given that all the newer hominin fossil finds come from this single layer it seems reasonable to associate these earlier finds with this level as well (Richter et al., 2017).Last year, Rainer was part of a team engaged in further research and investigation on the fossils and artifacts from Jebel Irhoud.The stone tools from the level were dated using the thermoluminescence dating method. We haven’t considered this method in our course, as it cannot be used to directly date human fossils. It’s another trapped-charge dating method, like ESR dating. Thermoluminescence could be used here because we were dating the artifacts from the same layer in which the hominin fossils were found – to give us an indirect dating for the fossils.In the decade since 2007, Rainer has done considerable work to gain further insights into the dose estimation of enamel fragments – refining the technique and our understanding of it. Also, when the juvenile mandible (Irhoud 3) was originally dated in 2007, the team had to use sediment samples that had an uncertain stratigraphy. This time, Rainer was able to use sediment from Level 7, which still matched the original description of where the mandible was found.With this new data and insights, the U-Series and ESR dating methods of Irhoud 3 returned an age of 286 ± 32 ka (254,000 to 318,000 years). The thermoluminescence dating method for the stone tools in Layer 7 returned an age of 315 ± 34 ka (281,000 to 349,000 years) (Richter et al., 2017).

You’ve just seen how our most recent dating of the fossils and artifacts of Jebel Irhoud has returned an age of around 300,000 years. What do you think?Is it reasonable for us to make a correlation between the fossils discovered in the 1960s and Layer 7?Please select the comments link and post your thoughts.

Hi there! We hope you're enjoying our article: Conclusions reached for Jebel Irhoud
This article is part of our course: A Question of Time: How We Date Human Evolution