Skip main navigation
Home / History / Archaeology / A Question of Time: How We Date Human Evolution / How Old are the Mungo Man Remains?

How Old are the Mungo Man Remains? 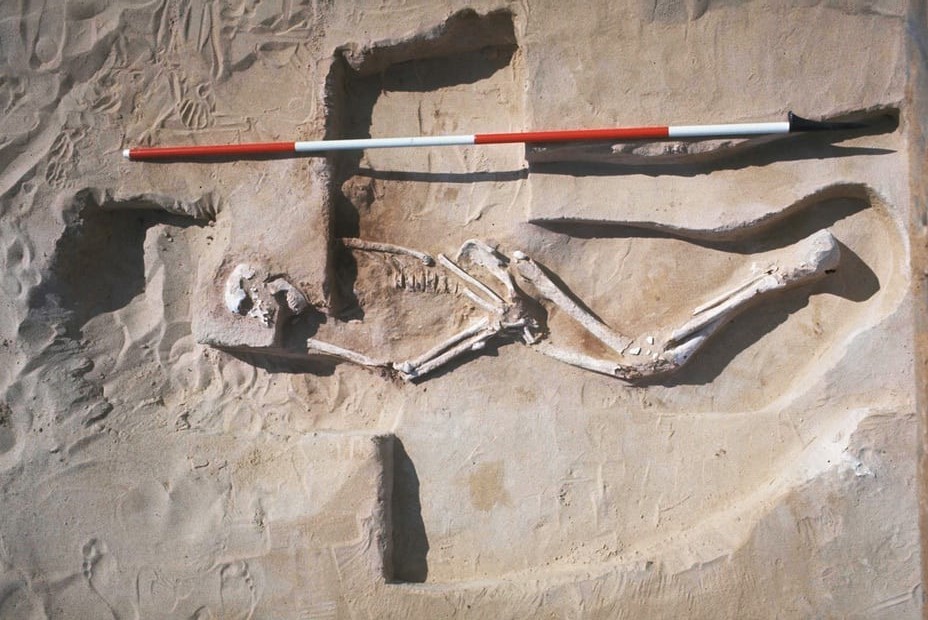 A look at what’s missing 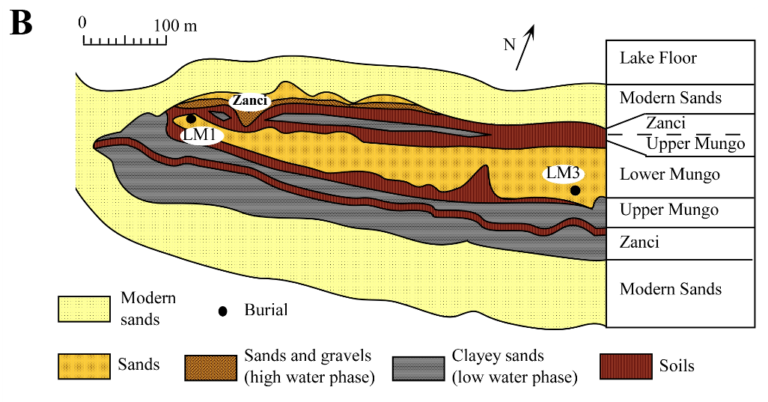 These drawings show the location of the LM3 site in the Walls of China (A), a plan of the layers at the sites of LM1 and LM3 (B), and a section showing the reconstruction of stratigraphic layers that had been deflated (C). (Drawings Rainer Grün – with permission.)

When LM3 (Mungo Man) was excavated, the stratigraphic reconstruction and work that had been done for the site of LM1 and LM2 was used to provide an estimated date by stratigraphic comparison. Trenches were also dug a few metres west of the remains, to help establish the stratigraphy. C-14 analysis was also carried out on associated material, but not on the remains themselves. They concluded that the remains were between 28,000 and 30,000 years old (Bowler and Thorne, 1976). Later thermoluminescence dating of the lower Mungo layer of the stratigraphy returned dates of between 36,000 years and 50,000 years (Oyston, 1996), suggesting that the site may be beyond the range of C-14 dating at that time. In 1998, a thermoluminescence date of a sample from the layer returned an age of around 41,000 years. (We haven’t covered luminescence dating, but in the links at the end of this page we have included a detailed handbook by Professor Geoff Duller from Aberystwyth University – in case you’d like to dig a little deeper.)

All of these previous dates were indirect dates – dates inferred from stratigraphy and context, and from associated artifacts and sediments. In 1999, Rainer worked with a team that included Alan Thorne, to carry out an ESR and U-series study on LM3 that would include direct dating methods. The team used bone shavings from LM3 for the U-series analysis and used ESR on the tooth enamel. They also carried out U-series dating on calcitic matrix recovered from the original skeleton, and Optically Stimulated Luminescence (OSL) analysis from sediment taken from a deeper layer of the soil (Thorne et al., 1999). The results were startling and created a bit of an uproar. They reported that the U-Series and ESR analyses on the bones yielded a date of 62,000 ± 6,000 years. The OSL age estimate on the sediments was 61,000 ± 2,000 years. The U-series analysis of the calcitic matrix returned an age of 81,000 ± 21,000 years (Thorne et al., 1999). All these ages were significantly older than what had been previously assumed from indirect methods. In 2003, a further OSL study of the site was carried out. Three separate laboratories were used to date samples that were taken from the layer associated with the Mungo remains. They concluded that LM3 was buried around 40,000 ± 2,000 years ago (Bowler et al., 2003).

They can’t BOTH be right…

Both dates cannot be correct. They do not even overlap – there is too big a gulf between 60,000 years and 40,000 years. Two of the researchers who were involved in these studies readily agreed to sit down and have an informal chat about the two vastly different dates.