Pastoral support is an ancient model of care that can be found in most cultures and traditions. At its most basic level it provides individuals with the opportunity to share their thoughts and feelings with an objective and empathetic listener. Modern healthcare models define good health as a positive interaction of physical, psychological, social, and ‘spiritual’ factors. While humanists are concerned with promoting all aspects of wellbeing, in this area of work, our main concern is to contribute to good outcomes for those in need, by helping them make sense of their situation in relation to their beliefs and values.

Historically, pastoral support has been affiliated with religion, and this is particularly true in the context of institutional service provision. In the UK, for example, hospitals, prisons, the military, and universities have all looked to the Anglican church to provide this sort of care. However, in recent years this has been extended to other religions and has now also started to include non-religious providers. In these sorts of places, people are presented with challenging, often life-changing circumstances. People may feel anxious, isolated, fearful, lost, lonely, or a myriad of other feelings. And at these times, it can be a source of comfort to talk to someone who is compassionate, empathetic, and genuine.

The development of multi-faith pastoral services, which include non-religious providers, has grown out of a response to changing demographics related to people’s beliefs. With British society becoming increasing plural, and with 53% of society now identifying as non-religious, it is important that everyone is able to access services that are most appropriate for them. While individuals working in pastoral services do not discriminate on the basis of people’s belief system, at a time of crisis, when people may be prompted to ask deep existential questions, often it can be important to work through these with someone of a shared worldview who is able to understand your opinions and beliefs without fear of judgement. Think of someone in a hospice receiving end-of-life care, who is concerned about what will happen after they die. For a Christian it might be important to talk about the afterlife with another Christian, for a Buddhist it might be important to talk about reincarnation with another Buddhist, and for a non-religious person it might be important to talk about death being the end of consciousness and what this means to them. While the concept of humanist pastoral support is a relatively new one in the UK, other European countries, such as the Netherlands and Belgium, have included humanists in their pastoral support provision for the past seventy years.

But what is pastoral support? The term itself is very difficult to define, as the type of care that is provided is responsive to the needs of the individual. The model of care illustrated below is used by all humanist pastoral carers in the UK. The model can be used to describe the different levels at which care may be provided: 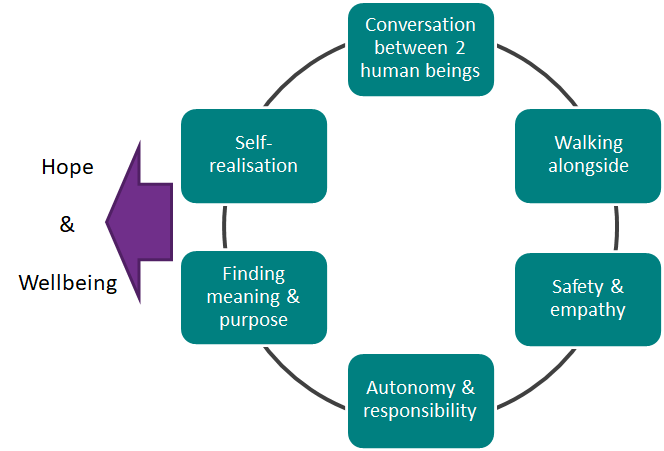 The vast majority of interactions may never reach ‘self-realisation’, but often that might not be what someone is looking for when they seek out support. At its most basic level the goal is to enhance the hope and wellbeing of the individual to which care is being provided.