Progression of vulnerability and hazard

Progression of vulnerability
View transcript
13.8
Just like Pakistan, Bangladesh is a nation prone to natural hazards. Between 1980 and 2008 Bangladesh experienced 219 natural disasters - causing more than $16 billion in damage, loss of human life, and long-lasting effects on society and the environment. There’s a conceptual model, or framework, that helps us understand why the disasters happened. And it can be replicated in regions throughout the world. This is the Pressure and Release model, or PAR for short. We have hazards but when we consider these hazards in the context of vulnerability, we can better understand risk as the basis for disaster. In the PAR model, there are three stages of vulnerability.
61.2
These are: Root Causes, Dynamic Pressures, and Unsafe Conditions. Together, they are called The Progression of Vulnerability. Let’s first consider Root Causes. This relates to the basic social, economic, and political factors that can give rise to vulnerability to hazards – leading to disasters. As a developing nation, the population of Bangladesh has limited access to resources. There may also be limited access to political power, which may work against sections of the population earning a livelihood. And, in Bangladesh, nearly 40 per cent of the country’s population live in poverty. Often these root causes are ignored by decision makers. Now, let’s consider the ‘Dynamic Pressures’ affecting that society.
121.5
For countries like Bangladesh, these include macro forces such as population growth, rapid urbanisation, deforestation and soil erosion and there are many more. Beyond this, we also have ‘deficiencies’, like a lack of institutions providing services such as health care and education. Other deficiencies in Bangladesh range from poor regulation of river systems, to inadequate education about early warning systems. Then there are the negative effects of debt repayments on the ability of countries like Bangladesh to develop and it is one of the most densely populated countries in the world. These dynamic pressures exacerbate and focus the underlying root causes, which are then manifested by more specific unsafe conditions. These Unsafe Conditions include a ‘fragile physical environment’, dangerous locations and exposed buildings.
183.1
We can also include fragile local economies and vulnerable groups here, too. And a lack of public actions and disaster preparedness. Plus, there’s the presence of endemic diseases to consider. These unsafe conditions leave a society vulnerable to various hazards. Bangladesh experiences cyclones, monsoons, storm surges, floods, earthquakes, droughts, arsenic contamination of groundwater, tornados and landslides. They have all caused significant problems. Much of the country is low-lying – exposing it to regular flooding. And its rural communities are ill equipped to deal with disaster. Storm events force many families to abandon their homes and livestock. Crops are regularly devastated, and livelihoods wrecked. These people often migrate to cities, finding themselves living in unsafe conditions in slums, and contributing to increased vulnerability.
249.4
So, let’s return to our simple equation as one way of understanding the causes and contributors to disaster. Risk is a combination of a hazard with people’s vulnerability. But we also need to consider a county’s capacity to withstand with a hazard. If we can improve capacity – through regulation and standards and an effective disaster plan - then we can reduce the risk. Unless we improve capacity and reduce vulnerability the only response to a disaster in countries like Bangladesh, can be to pick up the pieces afterwards.

According to the UN Office for Disaster Risk Reduction, disaster risk is defined as:

The potential loss of life, injury or destroyed or damaged assets which could occur to a system, society or a community in a specific period of time, determined probabilistically as a function of hazard, exposure, and capacity.
(UNISDR 2017)

View Course
The impacts of disaster are influenced most significantly by the underlying conditions of the people exposed to hazards. Blaikie et al. (1994) introduced a model to explain how disasters happen, calling it the Pressure and Release (PAR) model. Watch the video at the top of this step to see how it can be applied.
PAR is a tool that shows that disasters occur when hazards affect vulnerable people. It seeks to explain how vulnerability is created (Blaikie et al. 1994). People’s vulnerability exists as a result of root causes (1) of wider social, economic and political conditions, which result in dynamic pressures (2) leaving many people not just exposed to hazards but living in unsafe conditions (3). 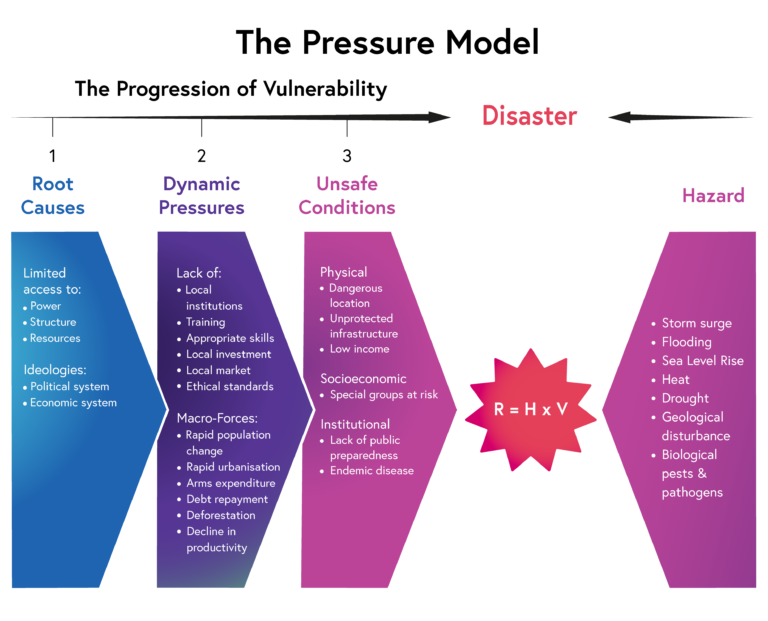 Adapted from Wisner et al (2004). Click to expand.
Vulnerable groups live under pressure where their access to services such as education, healthcare and secure livelihood options are limited, which in turn means limited and unstable income, resulting in poverty, poor health and unsafe living conditions. In order to release these pressures, we must act to reduce the vulnerability component of risk.
Over the last 40 years, we have shifted from a hazard perspective, where we felt we could only respond to the impacts of the hazard, to a more vulnerability-focused view where disaster risk reduction initiatives seek to reduce the underlying causes and effects of vulnerability locally and limit potential impacts before they occur. However, the limited capacity of communities and governments means that residual risks are still present and disasters still occur. As a result, communities and agencies must prepare for impact and response.

Find some information about the conditions in Pakistan immediately prior to the 2010 floods. Use them to conduct a simple progression of vulnerability analysis using the pressure model.
Consider how the factors in Pakistan before the floods created root causes (1) that led to dynamic pressures (2) and ultimately unsafe conditions (3) meaning that some people were more significantly affected than others.