This article looks at containers in Azure , container environments, and how to use the Azure Container Service.

Computing has shifted significantly since the days when only physical machines could be used. Virtual machines (VMs) opened up the possibility of running multiple instances on one machine with separate environments and applications.

Although VMs have revolutionised traditional and cloud computing, applications or processes that require large amounts of memory challenge the idea of scalability for machines.

What is the difference between containers and Virtual machines?

Containers have similarities to VMs because of how they can partition into multiple environments with separate drives and memory, but maintain isolation for applications.

The containers include an isolated application to be hosted with its dependencies, settings, and storage, but share the kernel with other containers. Since multiple containers are stored in one instance, they can be updated the same way so that there are clones of containers.

The combination of an instant startup that OS virtualisation provides and reliable execution that derives from isolation and resource governance makes containers ideal for application development and testing, and developers can quickly iterate. Because its environment and resource usage are consistent across systems, a containerised application that works on a developer’s system will work the same way on a production system.

The instant-start and small footprint also benefit cloud scenarios, because applications can scale out quickly and many more application instances can fit onto a machine than if they were each in a virtual machine, maximising resource utilisation.

With IaC, you can copy the environment for production as a container and deploy it anywhere with the configuration set up. With Docker, you create a Dockerfile that’s a short script of configuration information, and then run the script to orchestrate containers on machine instances.

Azure Container Service makes it simpler for you to create, configure, and manage a cluster of virtual machines that are preconfigured to run containerised applications. It uses an optimised configuration of popular open-source scheduling and orchestration tools.

This enables you to use your existing skills, or draw upon a large and growing body of community expertise, to deploy and manage container-based applications on Microsoft Azure. 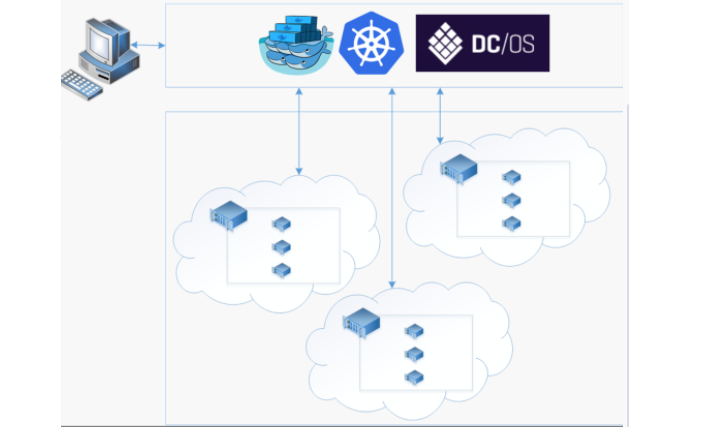 Azure Container Service leverages the Docker container format to ensure that your application containers are fully portable. It also supports your choice of Marathon and DC/OS, Docker Swarm, or Kubernetes so that you can scale these applications to thousands of containers, or even tens of thousands.

By using Azure Container Service, you can take advantage of the enterprise-grade features of Azure, while still maintaining application portability, including portability at the orchestration layers.