We’ve been on an Azure journey. We looked at Azure Resource Manager and its architecture and automation.

We then paused at DevTest labs where we created templates and used them in production. In the last section, we stopped outside of the parameters of Azure and looked at automation resources such as Chef, Puppet and Ansible.

This step demonstrates how you can manage your Azure VM configuration with Chef.

Chef is considered an Automation Resource that provides seamless integration with Azure with the Cloud API.

There are also the concepts of Chef Cookbooks and Recipes. These are effectively the policies that you define and apply to your servers.

Chef uses a Cookbook to define a set of commands that you want to execute on your managed client. Creating a Cookbook is straightforward, and you use the chef generate cookbook command to generate a Cookbook template.

Before creating a cookbook, you must do the following:

See the page Automating Azure virtual machine deployment with Chef to prepare for creating a cookbook.

This example calls the Cookbook web server for a policy that automatically deploys IIS.

Under your C:Chef directory, run the following command:

This will generate a set of files under the directory C:Chefcookbookswebserver. Next, you need to define the set of commands that you’d like the Chef client to execute on your managed virtual machine.

The commands are stored in the file default.rb. For this example, a set of commands will be defined that installs IIS, starts IIS, and copies a template file to the wwwroot folder.

Modify the C:chefcookbookswebserverrecipesdefault.rb file and add the following lines:

Save the file after you are done.

To generate the template, run the following command:

Now navigate to the C:chefcookbookswebservertemplatesdefaultDefault.htm.erb file. Edit the file by adding some simple ‘Hello World’ HTML code, and then save the file. Next, upload the cookbook to the Chef Server so that it appears under the Policy tab by running the following command:

Deploy a VM with Knife Azure in Chef

To deploy an Azure VM and apply a Cookbook to install an IIS web service and default webpage, use the Knife Azure server create command:

Substitute your variables for the parameters and run the command. Once the command is run, you can view the provision in the Azure portal:

The command prompt will then appear: 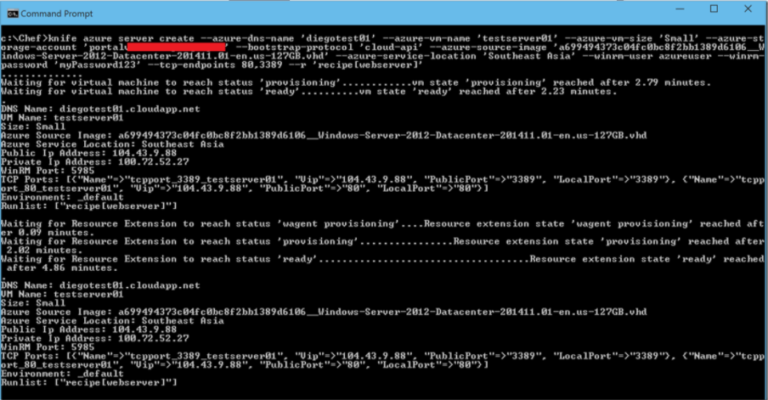 After the deployment is complete, you should be able to connect to the web service over port 80. The port was opened when the VM was provisioned with the Knife command.