Find out more
Home / IT & Computer Science / Business Technology / Introduction to Blockchain Technology and Applications / What is governance in Blockchain?

What is governance in Blockchain?

This article explains the role of governance in Blockchain - covering privacy, compliance, regulation, and governance structures. 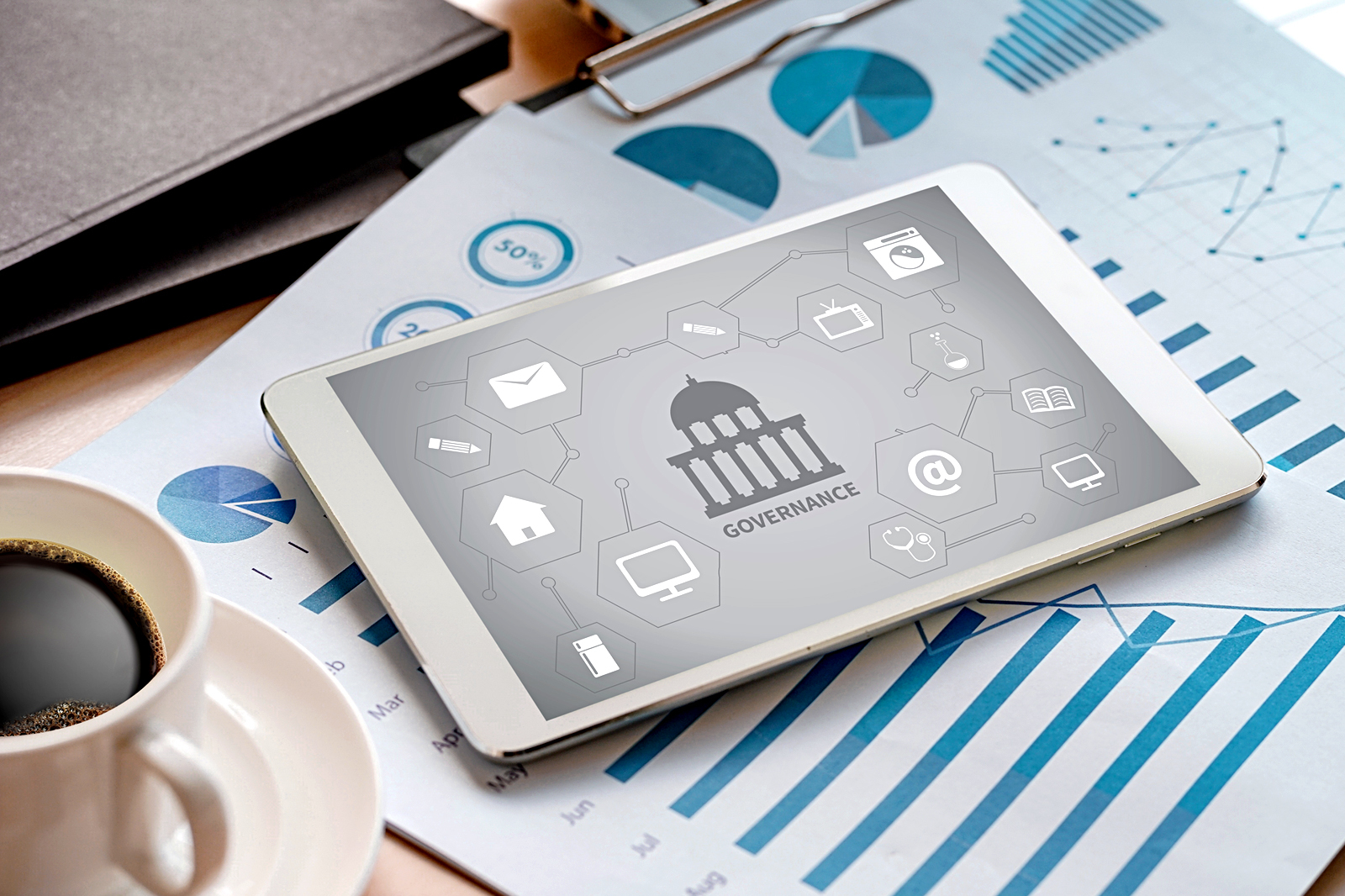 Governance is crucially important in Blockchain systems in order to make sure that a system has the correct incentives, is able to grow and succeed, and can develop an ecosystem.

Here, ‘governance’ refers to decision making and control, with a focus on who has these capabilities.

A compulsory requirement for a Blockchain project’s success is that it maintains decentralisation. The project must also create governance that can deal with the complexity in decision making in order to reduce uncertainty, delays and costs when used by stakeholders over existing systems.

One issue with building traction with blockchain systems with external stakeholders is the competition paradox.

This refers to the fact that, in order for a blockchain system to be viable, there need to be multiple stakeholders involved. In the business environment, when you want to use a blockchain network, perhaps to save on redundant infrastructure costs (on information that is common to multiple competitors), it can be difficult to agree on the governance aspects of the Blockchain solution.

In general, sitting around the table with stakeholders that a business is used to competing with, and agreeing on a mutually beneficial cooperation structure, can be challenging. This is why it can be useful to involve neutral bodies such as regulators, universities, or trade bodies/consortiums to help facilitate the adoption of useful infrastructure.

Governance is also affected by privacy, compliance and regulatory requirements. For many business problems, strict legal requirements mean that a high degree of privacy and compliance is needed. This means that a private Blockchain would be the only possible solution. Public Blockchains tend to offer greater degrees of decentralisation, but their use may not be possible for many businesses.

Taking Bitcoin as an example, the protocol and rules governing the network were created when the network began. There is some governance on how changes are made by those involved in it—particularly at a technical level. This is affected by the number of users participating in the network.

Due to the large number of stakeholders involved, it is very hard to get any meaningful changes due to a lack of consensus. For the Bitcoin Blockchain, this has led to various factions splitting off and developing their own new blockchains that are evolutions of Bitcoin.

In the case of private networks, because there are fewer participants, governance decisions are much easier to carry out. Changes to the system are easier to deploy as a business situation evolves in the future.

The governance structures for how a network develops at first depend on the initial founding nature and involvement of stakeholders. Different levels of authority and decision making are usually present.

For example, let’s consider the governance and membership structure of stakeholders in several common blockchain network structures. In Figure 1 below, we look at founder-led networks and consortiums. 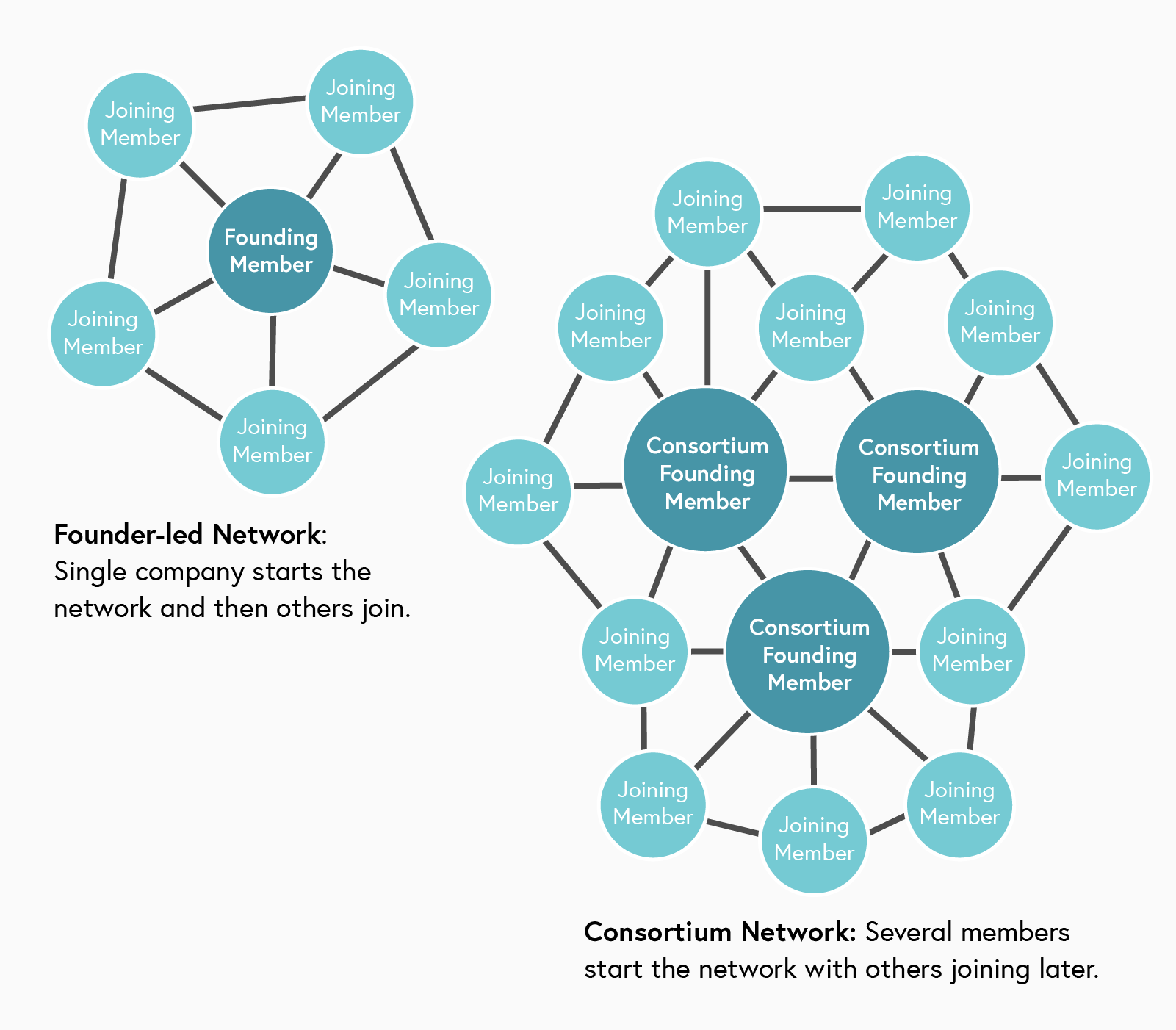 Depending on the business problem that is being tackled, a single organisation may wish to develop a founder-led network. This can have the advantage of keeping an industry-led leadership position as a solution is implemented for stakeholders already within the organisation’s network. The disadvantages of this may be the level of investment and resources needed to start the network. One example of a founder-led network is the Bitcoin blockchain.

Consortium networks are another popular structure. Here, a number of different industry players join together to achieve a common goal and capitalise on synergies between participants. Consortia tend to be flexible, allowing the pooling of risk for participants and making sure that standards in processes are used by all members. The disadvantages of this can, of course, be issues of IP, liability and non-performance of members. Examples of consortia include R3 and the Enterprise Ethereum Alliance.

In deciding on launching a blockchain for a particular business problem—especially when external to a business—governance aspects are important as they will determine the nature of how a blockchain ecosystem will develop and evolve.