Find out more
Home / Law / Social Issues / Why Do People Migrate? Facts / People on the move across the Mediterranean Sea

People on the move across the Mediterranean Sea 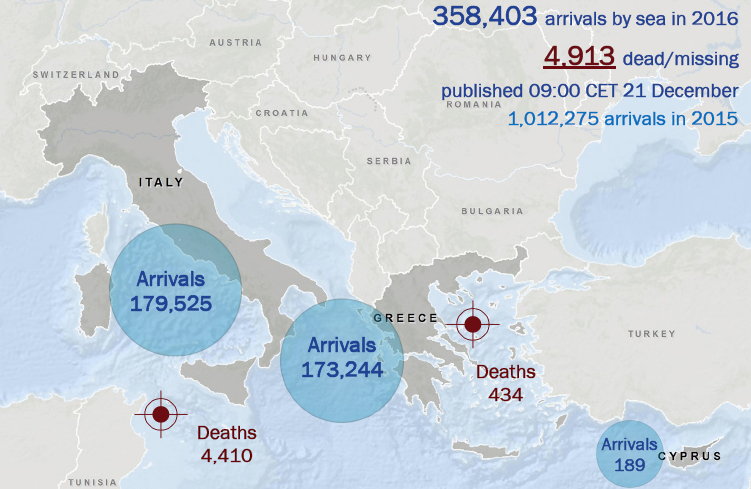 The eastern Mediterranean route has been under pressure for the past five years, although flows over the longer period have shifted repeatedly from the islands (on the Greek-Turkish sea border) to overland (on the Greek-Turkish land border). Thus, while in 2008 and early 2009, sea crossings from the Turkish coast to the Aegean islands of Samos, Lesvos, and Chios were the preferred routes, a sudden change occurred in late 2009 when irregular migrants apprehended on the land border between Greece and Turkey increased fivefold, while those apprehended at the sea borders fell by 70 per cent. In 2012, the route shifted again: detentions or interceptions fell dramatically at the Greek-Turkish land border but tripled in 2013 and quadrupled in 2014 on the islands.

The same trend was registered in 2015: the sea border, and in particular the island of Lesvos, accounted for almost all irregular entries into Greece. According to the International Organization for Migration, 853,000 people arrived in Greece via this route. Most people originated from Syria, while smaller numbers arrived from Afghanistan and Iraq. This flow was abruptly stopped at the end of March 2016 after the signature of the EU-Turkey Statement (which we will look at in more detail later this week).

The central Mediterranean route has seen high numbers of irregular arrivals for the last 15 years. Italy registered peaks in apprehensions at its sea borders between 2006 and 2007, which then hit all-time lows in 2009 and 2010 after the Italian Government signed an agreement with the Gaddafi regime in Libya to push back people who had set sail from the North African coast. Numbers climbed dramatically in early 2011 during the ‘Arab Spring’ and again in 2013 and 2014. Arrivals have remained high since 2015, which have led to an almost continual state of emergency.

Although the numbers arriving in Italy in 2015 and 2016 were not dramatically different in scale to those in 2014, the composition of the migrant population changed significantly. The period saw a sharp decline in the number of Syrian nationals, while the majority is composed by single young men from a range of East and West African countries. These countries – which are more diverse than the origin countries of arrivals in Greece – include Eritrea, Nigeria, Somalia, Sudan, Gambia, Mali, and Senegal.

The western Mediterranean route originates in sub-Saharan Africa and runs through Morocco to Spain via the Spanish cities of Ceuta and Melilla in North Africa, the Canary Islands or, indeed, directly across the Strait of Gibraltar to the Spanish mainland. Until a decade ago, this route was mainly used by Moroccan and Algerian migrants seeking better job opportunities in Europe. In the mid-2000s, it became a preferred route for irregular migrants from sub-Saharan Africa driven northwards by regional conflicts. However, over the past five years, it has decreased in significance and to some extent has been abandoned.

The Mediterranean crossings have been characterised by a series of major shipwrecks over the last five years. A far larger number of deaths was registered along the central Mediterranean route than along the eastern or western Mediterranean corridors. According to the IOM Missing Migrants project, in the first six months of 2016, 1 in 29 migrants died attempting the central Mediterranean route, compared with 1 in 410 on the eastern Mediterranean route. Clearly the passage in unsuitable and overloaded vessels from the Libyan coast to southern Italy is much longer and more dangerous compared to the short crossing from the Turkish coast to the Aegean islands. However, the rise in the number of dead and missing people is also related to the restrictive policies applied in the region.