In this video you will meet a Javanese-speaking family from Suriname and learn about their struggle to maintain their language across generations.
View transcript
6
[Dutch:] I am of Javanese descent. I was born in Suriname, on 21 December 1945. On a plantation in the Commewijne district. When I was 13, I went to the city, to the Technical School. And that’s where I grew up. But life in the city is very different… from life on the plantation. In the city you mostly speak Negro-English and Dutch, at school. But at home, I lived with my aunt… I could still speak Javanese with my aunt. My aunt was about twenty years older than me. That’s how I kept up my Javanese while living in the city. I migrated to the Netherlands in 1984. My sister already lived here.
69.2
So she came to get me from Suriname to come and live here. To build a future here in the Netherlands. Especially for the children, I have seven children. When I arrived here in1984, my eldest daughter was already 17. And my youngest was 7, right? Mervin was 17, I mean 7. So that’s how I came to the Netherlands. I had learned Dutch in Suriname. But here, in the north of the Netherlands… I heard a different language, Gronings. And I didn’t understand a word.
116.7
In Suriname, the older people of Javanese descent… speak almost no Dutch. It should be respected that they speak Javanese. I was raised by my grandparents… and that’s how I became fluent in Javanese. In Suriname, people are raised to speak Surinamese. Not the majority, but especially if you’re from the city. But on the plantations… Javanese is still the main language of Javanese culture. The Javanese community on the plantations… is held together by the Javanese language. At school they only speak Dutch. That’s how it is. In Islamic schools, some people still speak Javanese. But in most mosques, even if they speak Javanese… most translations that they receive there, are in Dutch. So the Javanese language…
191.2
both in Suriname and among the Javanese community here… is dying day by day.
206.2
When Jade, or one of my grandchildren visits, I’ll talk a little Dutch. But mostly Javanese, so that my grandchildren… as well as my children-in-law, because I only have white sons-in-law… can learn a little about the Javanese language. Sometimes they come in with the Muslim greeting ‘Salaam Aleikum’.
233
So I ask: You know what that means?
233
They say: Isn’t that the Arabic greeting?
240.9
And I say: Yes, but in Javanese you say: Wilujeng enjing, or wilujeng sonten, or wilujeng Siang. Which means good morning, good afternoon and good evening. Yes, I have seven children, as you know. And they can all speak Javanese. -And still do. That’s right. My youngest is 40 now, and lives in Suriname. Some people, when they visit Suriname with her mother…
273.8
ask her: You’ve lived in the Netherlands for thirty years now. And your son can still speak Javanese? That’s because I always encourage them to speak Javanese.
288
I shall ask Jade: Isn’t Javanese a beautiful language? Yes, it’s fun to speak.
300.6
For me especially, group identity is very important. We have an association here. A Javanese association, with a Javanese name. But when we get together, everybody talks Dutch. I think that’s ridiculous. A Javanese association, where most people only speak Dutch. For my part, I encourage the members of my musical association… to speak a bit of Javanese, when we get together every Wednesday. In my association, only two people still speak Javanese.
349.5
People say: You’re living in the Netherlands, you should speak Dutch. But listen, you learn Dutch at school. You speak it in the workplace. But Javanese? I have had jobs at several companies here. I couldn’t speak Javanese there, most of my colleagues were Dutch. So I can only speak Javanese at home, and if I neglect that… it’s over. That’s why at home, I always speak Javanese with my wife.
397.6
I am of the Islamic faith, but I cannot read Arabic. But now you also have Arabic words written in the Latin alphabet. That’s how I’ve learned what they mean. So when someone reads in Arabic… I open my book and see what it means. But when I explain Arabic words to members of my association… it’s mostly in Javanese. We pray in Arabic, of course. But when we’re done with the prayers… Everything you worship in the Islamic faith, is always in Arabic. But I have never learned Arabic words, or letters. I have learned all these things only with Latin words. Latin words.
461.2
We must preserve our culture. But what I see… when I go all the way to Amsterdam, to my other associations… is that they only speak Dutch. And I wonder, why not Javanese? If it were a mixed association, it would be fine. Some of my members are Dutch… but they have married a Javanese woman. Really quite a lot. So what happens is… that I more or less unconsciously speak Javanese. In a Javanese cultural association, you should speak Javanese. That’s how I try to preserve the Javanese language and culture. I shall always hold on to my Javanese tradition, for ever.

In this video you will meet a Javanese-speaking family from Suriname and learn about their struggle to maintain their language across generations.

Javanese Surinamese is a language spoken by an ethnic group of Javanese descent in Suriname, who has been present in the Netherlands since the late 19th century. They were taken there by Dutch colonisers from the former Dutch East Indies.

On the world map below you can see where Suriname is. 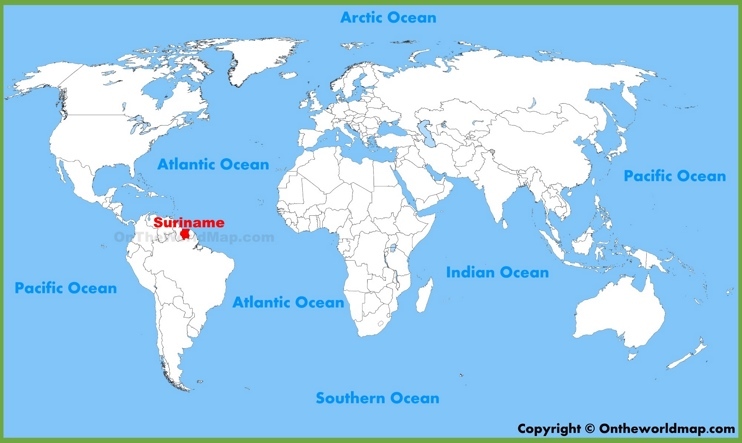