Skip main navigation
Home / Healthcare & Medicine / Biology & Biotechnology / The Musculoskeletal System: The Science of Staying Active into Old Age / What Happens to our Bodies as we Age?

What Happens to our Bodies as we Age?

We Age at a Cellular Level

As we get older, processes inside our cells, combined with influences from our environment, such as sunlight and toxins in our diet, begin to change the structure of our cells and the function of the molecules inside them.

As our cells function less well, our tissues and organs will begin to deteriorate, and eventually, our health will decline.

Recently, researchers have categorised these changes into nine interconnected “hallmarks of ageing” which manifest in all mammals as they get older. These range from the accumulation of damage in DNA to altered communication between cells. 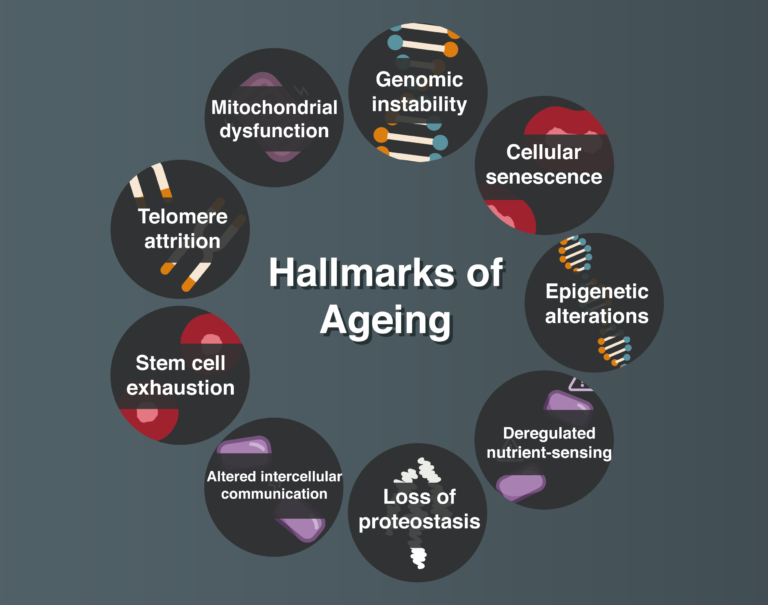 The nine hallmarks of ageing

DNA is like the brain of the cell and contains all the information that a cell needs to function. As DNA becomes damaged, our cells stop functioning properly.

Sources of DNA damage come from both inside and outside the body. Endogenous (internal) damage comes from reactive products created during normal physiological processes such as metabolism. Whilst examples of exogenous (external) damage include UV radiation and tobacco carcinogens.

DNA damage can also accumulate as a consequence of cell division. When DNA replicates, sometimes the cellular machinery involved in the process can make mistakes. We have evolved complex DNA repair mechanisms that usually fix the damage, but errors can slip through and accumulate over time. Ageing has also been linked to the deterioration of the DNA repair mechanisms, so permanent errors become more common as we get older.

Damage Affects the DNA in the Mitochondria of our Cells.

DNA is contained in the mitochondria (mtDNA) which is where energy is made for the rest of the cell. As a result of energy metabolism, harmful waste products called reactive oxygen species (ROS) are created which damage mtDNA and other cellular structures.

Over time, this leads to mitochondrial dysfunction and as mitochondrial function declines, so too does the cell and the whole organ.

The DNA in our cells is packaged in a structure called chromosomes, which have a protected region at the end called telomeres.

Every time a cell divides they lose a little bit of the telomere until they become critically short. Eventually, telomeres get too short to do their job, causing our cells to age and stop functioning properly.

Cells Die as we Age

Once cells are subjected to enough stress, DNA damage and telomere shortening, they either die or become senescent.

A senescent cell is a cell which is no longer able to divide. This protective mechanism prevents damaged cells from becoming cancerous but it also prevents old, worn out tissues from being replenished. Senescent cells also cause inflammation which affects the ability of the surrounding cells to work.

This means that cells progressively lose their ability to replicate with age. This is particularly significant when it comes to stem cells. Stem cells serve as a sort of internal repair system, dividing without limit to replenish other cells.

As we get older and stem cells decrease in number, we lose our ability to regenerate or repair damaged tissues.

As our cells begin to deteriorate, they stop passing signals to each other effectively.

This dysfunctional communication leads to issues like chronic tissue inflammation, as well as failure of the immune system to recognize and clear pathogens or dysfunctional cells, which increases our susceptibility to infection and cancer.

So what does this mean for ageing?

We are only just starting to understand how important these changes are in ageing and in making people more predisposed to develop disease.

As we better understand these changes, we can begin to understand how they can be delayed through physical activity, better nutrition and medication.

Further viewing: can we understand ageing from an evolutionary point of view?

In this article we have looked at the biology of the ageing process, but can we also understand ageing from an evolutionary point of view?

Ageing can be described as a progressive loss of function accompanied by decreasing fertility and increasing mortality. Such a trait that impairs survival and fertility is clearly bad for the individual, so why has it evolved? In this video, Dr Daryl Shanley from Newcastle University asks: why do we age and can we understand this process from an evolutionary point of view? If you prefer to listen to this information, we have provided an audio version of the video, alongside a written transcript, which you’ll find under ‘DOWNLOADS’ below.