Joachim Schleich presents today’s global energy challenges.
View transcript
11.5
Hello, my name is Joachim Schleich. I am professor of Energy Economics at Grenoble Ecole de Management. My research includes energy and climate economics. In these areas I have also consulted for the European Commission and several European Governments. At an overarching level, the key challenge for the energy system is to meet global energy demand with clean, reliable and affordable energy. We’ll hear more what this really means in this MOOC.
48.9
Energy is needed in form of electricity to power our refrigerators, computers, or conveyer belts. It is used to heat our homes and water for a hot shower, or to heat a blast furnace to melt steel. Energy also runs our cars, trucks and planes. Total world energy has increased since the year 1990 by over 55% and is projected to grow by nearly one third until the year 2040. Future growth in energy is predicted to mostly come from non-industrialized countries. For the European Union energy demand is expected to drop slightly. For Asia, high growth rates of more than 60% are projected. The largest absolute boost in energy demand will be observed in China and India.
103.4
Global energy supply relies predominantly on fossil fuels like oil, coal and natural gas. The most important energy fuel is oil. Oil currently accounts for over 30 percent of global energy use mostly to fuel cars. Then come coal, which is primarly used to generate electricity. Third place goes to natural gas, which heats homes, and also generates electricity in turbines. The current share of nuclear in total energy production
137.7
is only 4%, but it is much high in electricity: Nuclear energy currently accounts for about 10% of global electricity generation. about 22 % of global electricity is currently generated from renewable energy sources, most of it in hydro power plants, while wind mills or solar collectors still play a relatively minor role only at the global level. Of course, the electricity mix differs by countries. For example, in France, three quarters of the electricity comes from nuclear power plants, while in Germany almost half the electricity is generated from coal, and about a quarter from renewable energy sources.
185.4
While new sources of energy are gradually changing the energy landscape, the burning of oil, gas, and coal is harmful to the environment. Most prominently, this leads to CO2 emissions causing global warming. Without further measures, average global temperature will climb by more than 3°C by the end of the century, and sea levels may rise by up to 1m. To prevent our planet from overheating, CO2 and other greenhouse gas emissions must be reduced by at least 50 percent by the midst of this century compared to their 1990 levels. In addition to global warming, the burning of fossil fuels also leads to local pollution problems such as smog in big cities like Beijing.
238.9
Many countries and regions have policy targets in place which steer the energy system towards meeting future demands for clean, reliable and affordable energy services. The targets for the European Union for the year 2020 involve a 20% cut in greenhouse gas emissions from their 1990 levels, a 20% share of energy from renewable sources and 20% improvement in energy efficiency. To achieve national policy targets and in response to technological progress the power sector is expected to go through a phase of significant transformation in most countries. Germany, for example, has decided to switch to a renewable energy economy and leave oil, coal, gas and also nuclear behind.
288.8
The share of renewables in the power mix in Germany is expected to increase from currently 30% to 50% in 2030 and to 80% in the year 2050. In comparison, France has decided to reduce the share of nuclear power from currently 75% to 50% over the next 10 years and to increase the share of renewable energies in turn. To stay in the market, utilities need to adjust to this transition with new products and and innovative business models. There are also some technological challenges ahead, requiring pioneering research by companies and universities.
331.4
Since the wind blows when and where it wants, and the sun doesn’t always shine, battery systems need to be developed which effectively store electricity at low cost and make it available for times of peak demand. In the future, electric vehicles may not only be charged with clean electricity, but they may also serve as electricity storage devices. Finally, electricity grids need to perform better so they can transport more loads at lower losses. To end this module, we note that energy supply is only half the story. Most countries consider improving energy efficiency a key strategy for meeting the energy challenges. This means using the kilowatt-hours produced more efficiently without losing comfort. We will hear more about energy efficiency in the next module.
385
Thank you for listening to this video.

At an overarching level, what is the key challenge for the energy system? Joachim addresses here this question through three points:

After watching the video, please share your ideas and comments: What are the energy challenges you are concerned about? Do you have any anecdote/experience you would like to share about it?

Since our last editions, the projections of energy demands have been updated to take into account the latest changes. Here is an updated chart of projected changes in energy demand between 2017 and 2040 based on the data from IEA (2018): World Energy Outlook.

The electricity mix has also evolved. Below are two charts from IEA Global Energy & CO2 Status Report showing the energy generation by source and the distribution between the different sources. 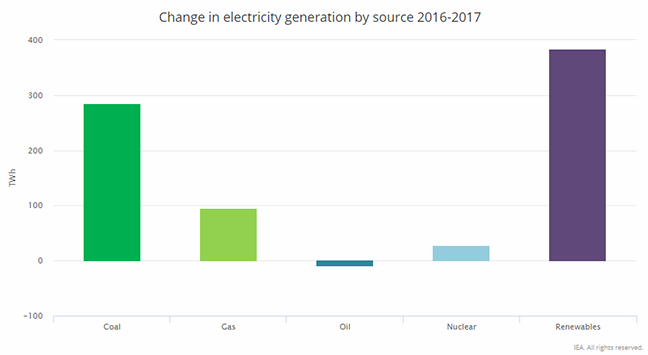 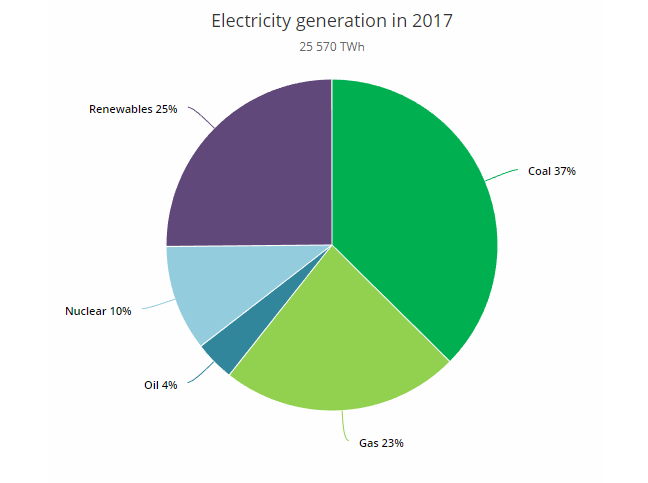