Differences Between Work-Related and Occupational Diseases

In this article, we discuss the differences between occupational diseases and work-related diseases, as well as their definitions. 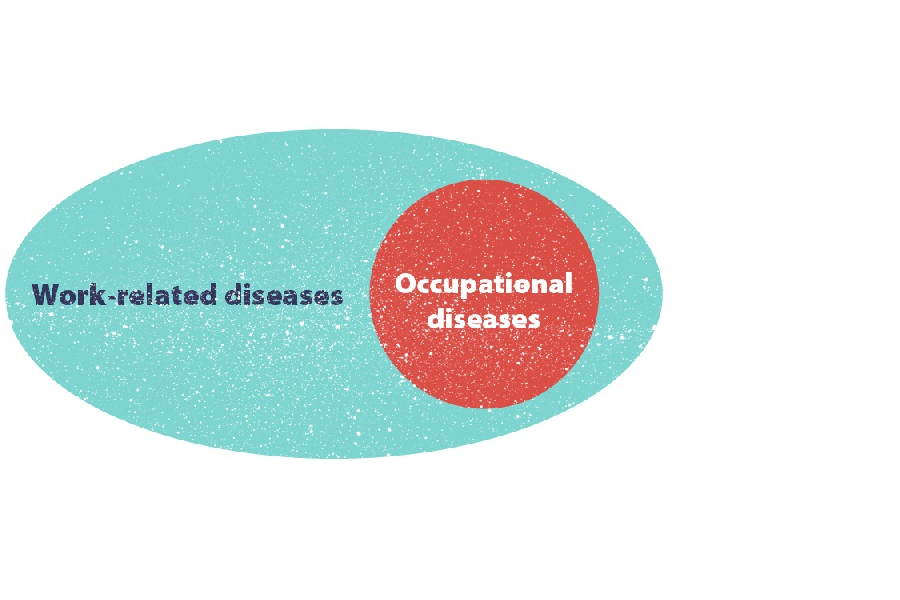 The most comprehensive of these concepts is work-related diseases, commonly used for diseases that are wholly or partially caused by working conditions, or which are aggravated by working conditions. According to World Health Organization (WHO), work-related diseases can have multiple causes, where factors in the work environment may play a role, together with other risk factors, in the development of such diseases.

The concept occupational disease is narrower. In many countries this is first and foremost a legal term associated with the possibility of economical compensation for the sufferer of such a disease. Traditionally, occupational diseases are diseases that are mainly caused by physical, chemical or biological factors at work, and most often includes illnesses that have been defined by one specific causal factor, like crystalline silica in the case of silicosis. All occupational diseases are included in the term work-related illnesses. 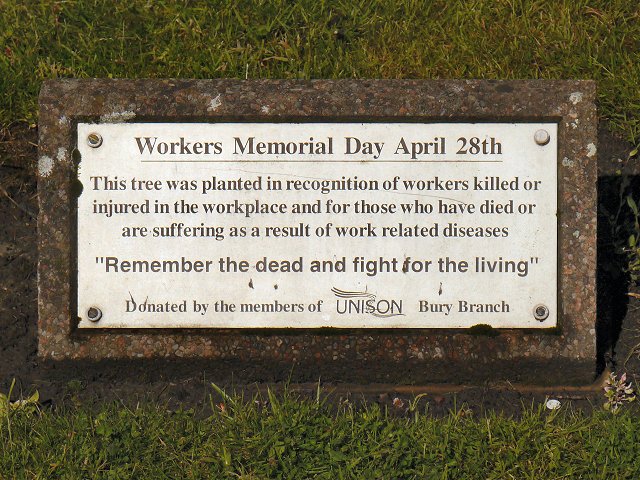 The plaque under “The Workers’ Tree”, Whitehead Gardens, near Manchester, UK
©David Dixon under a Creative Commons Licence

How an occupational disease is defined varies widely globally. Even neighboring countries may have very different definitions. ILO has developed a list of internationally recognized occupational diseases, agreed upon by governments as well as employer and worker organizations. According to this list, occupational diseases range from illnesses caused by chemical, physical and biological agents to respiratory and skin diseases, musculo-skeletal disorders and occupational cancer. The list was revised in 2010, and for the first time some mental and behavioural disorders have been included as well.

According to ILO the following apply to an occupational disease:

An overview of diseases that might be regarded as occupational

See the ILO list of Occupational Diseases (2010) for more details.

It is difficult to know how many countries use this list or specific definitions of occupational diseases. What we do know, is that in several Western/European countries this list is refined to fit in the local legislation. Many developing countries do not have such a list, or only a very short one. This is due to a fragmented social security system or even lack of social benefits in many developing countries.

Some countries use a so called “list system”. This system covers only a certain number of work-related diseases, and has the advantage of listing diseases for which it is presumed that they are of occupational origin. This simplifies the matter for all parties since it is often very difficult, if not impossible, to prove or disprove that a disease is directly attributable to the patient’s occupation. It also has the important advantage of indicating clearly, where prevention should focus. Other countries use the “general definition system”. This system theoretically covers all occupational diseases; it affords the widest and most flexible protection, but leaves it to the victim to prove the occupational origin of the disease. In practice, it also often implies that arbitration on individual cases is necessary. Furthermore, no emphasis is placed on specific prevention. Because of this marked difference between the “general definition” and “list” systems, a “mixed system” has been favoured by many ILO member states because it combines the advantages of the other two without their disadvantages.

There are several reasons to have a compensation system related to occupational diseases. The most obvious one is, of course, for worker protection. If a person is harmed at work, he or she should be compensated. No work place should produce diseased persons. Often, the diseases lead to a serious situation for the worker. He or she might not be able to continue the work due to a serious disability. Also, the work may worsen the health condition developed. Lung diseases due to dust exposure, for instance, may become more severe if the work and exposure continues. It may even be necessary for the worker to leave the work situation completely to stop the disease from developing further.

Another reason for using specific definitions for occupational diseases is the fact that countries with such systems can keep better records of the incidence of given diseases. This is particularly important for situations where public social benefits are related to particular occupational diseases. It involves a national registry system and physicians in each country are most often asked to report any such cases to the national authorities. This, in turn, makes it possible to generate national statistical analyses of a country’s occupational disease situation. The possibility of economic compensation for the worker is a primary motivating factor for the reporting of such diseases. One positive benefit from such disease statistics in a country is the opportunity it provides to evaluate the need for preventive procedures at work places. Thus the reporting systems functions for the benefit of all workers. The compensation system may act as an indirect catalyst as incentive for establishing preventive measures. The cost of compensations for the employer and the society may highlight the need for prevention, to avoid such expenses. It is therefore highly recommended that all countries develop both compensation systems and reporting systems for occupational diseases.