Biomonitoring can be used in the surveillance of workers performing particularly hazardous jobs involving toxic chemicals, and can be used to confirm the efficacy of control measures. For instance, measurements of mercury in urine could be done to assess whether the protective equipment used when handling mercury during amalgamation in a gold mine is adequate to prevent uptake of mercury in the body. The ACGIH guideline for mercury in urine is 20μg/g creatinine.

A review article from 2014 on mercury exposure among artisanal small-scale gold miners in developing countries reported that a considerable proportion of workers had urine mercury levels above existing guidelines. The mean mercury levels differed substantially between studies included in this review (3.9 to 233.0 μg/g creatinine). Possible explanations for these differences include dissimilarities in gold extraction methods, use of protective devices, and selection of participants. This review provides evidence that artisanal gold miners are exposed to mercury vapour to an extent where acute and long-term toxic effects of mercury are likely, and that interventions are strongly needed.

Biomonitoring includes measurement of a range of components in specimens such as urine, blood, exhaled breath and hair. The components measured could be the actual toxic substance, its metabolites or some marker of a biological effect of the toxicant. The advantage of using biological sampling is that the biological parameter, e.g. mercury in urine, is more directly related to the adverse health effect than the air concentration in the breathing zone of the worker. In addition biomonitoring usually accounts for uptake by all exposure routes, including skin. Thus, biomonitoring may offer a better risk estimate than is determined by air monitoring. However, there are a number of pitfalls when conducting biological sampling and analysis of relevant substances, and only competent personnel should plan and perform such measurements. Access to a high quality laboratory is an absolute prerequisite.

Biological sampling mainly involves blood samples (e.g. lead, carboxyhemoglobin/marker for carbon-monoxide) or urine samples (e.g. mercury, cadmium, S-Phenylmercapturic acid/metabolite of benzene). The concentrations of urine components, such as mercury, are often adjusted for variations in the urine concentration/dilution by concomitant measurement of the creatinine-concentration in the urine sample. Creatinine is a metabolic product of muscle tissue, and is excreted from the body at a fairly constant rate in urine, although it varies somewhat with age, sex, muscle mass and meat intake. We adjust by creatinine because the urine dilution may differ from one day to another. For instance, when working in hot environments without proper access to water the urine is concentrated. Consequently, the concentration of substances in the urine is high. The effect of urinary dilution can be accounted for by determining the amount of the environmental chemical per amount of urinary creatinine in a given volume of urine. For instance, the result for mercury in urine is given in nmol mercury per mmol creatinine (nanomol mercury per millimol creatinine). It is also possible to make adjustments for specific weight, which varies less with age, sex and muscle mass than creatinine levels.

Another aspect of great importance is the timing of collection of biological samples. This is determined by the half-life of the substance in the relevant biological medium (e.g. blood or urine). For substances with long half-lives (weeks/years) such as lead in blood and mercury in urine, the timing of the sampling is not critical. However, when the half-life is short (minutes/hours) including benzene and its metabolites the timing is of crucial importance, and sampling at the end of a shift is often recommended. 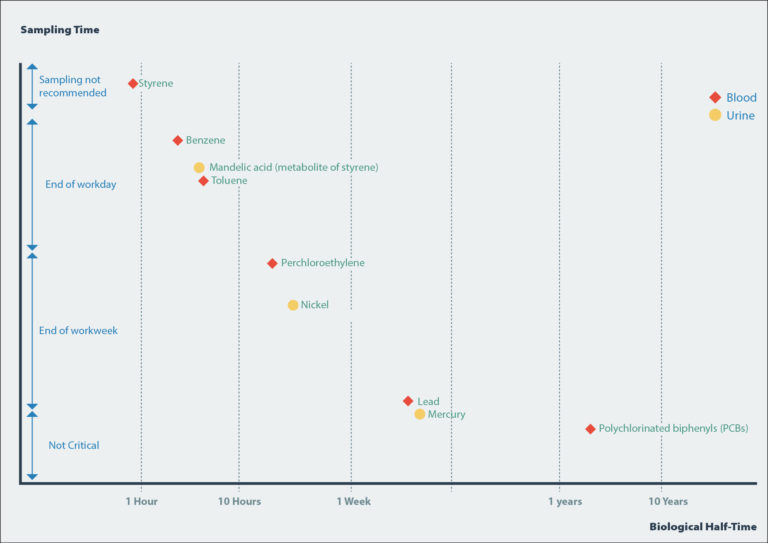 Relationship between the biological half-time of compounds in blood or urine and biological sampling time. © University of Bergen/Arjun Ahluwalia

Several countries have special requirements for sending biological material such as blood and urine samples. A general recommendation is that, after sampling, the biological samples should be sent in an impact-resistant plastic container to prevent breakage and leakage during transport to the laboratory. The sender is responsible for shipping correctly.

It is very important for biological samples that

In the following presentation we will refer to a list of Biological Exposure Indices (BEI) developed by American Conference of Governmental Industrial Hygienists (ACGIH), and presented in the annual ACGIH booklet on TLV and BEIs. According to ACGIH the BEIs represent the levels of chemical determinants that, with some exceptions, are most likely to be observed in biological specimen (e.g. blood, urine) collected from healthy workers who have been exposed to chemicals to the same extent as workers with inhalation exposure levels at the Threshold Limit Value (TLV). The BEI generally indicates a concentration below which nearly all workers should not experience adverse health effects.