Find out more
Home / Business & Management / Marketing / Pathways to Property: Starting Your Career in Real Estate / Who are the Stakeholders in the Property Industry?

Who are the Stakeholders in the Property Industry?

There are a range of professionals who are involved in property investment, development and management. Read more about the different stakeholders.
© HBS and RREF

A stakeholder is anyone who impacts on, or is impacted by, the property development process. This means it’s not only ‘professionals’ who are involved in buying, developing and managing property. We’re all stakeholders in property because we all need buildings to live, work and play.

The ‘stakeholder map’ below shows the type of actors who are involved or impacted when a major brownfield redevelopment project takes place. A brownfield development is:

the reuse or redevelopment of land that has been previously developed and is currently underused or vacant. The land might also be derelict or contaminated. 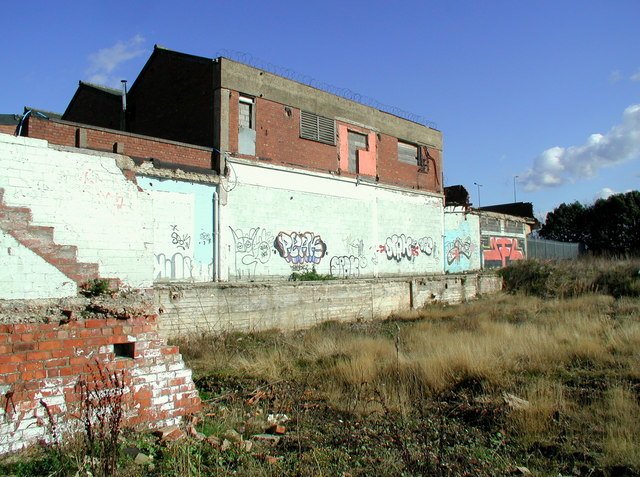 Although there are a lot of stakeholder groups included in the diagram below, each group can be broken down even further. For instance, developers come in many shapes and sizes and often have their own ‘specialism’, whilst a central government might include a range of different departments and agencies, promoting different agendas or supporting other actors. 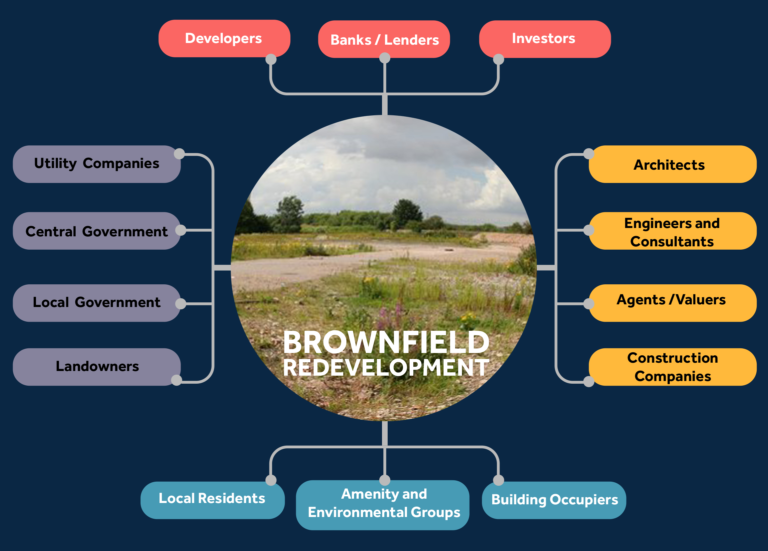 Architects and related professionals will be hired by developers to design the buildings and spaces they wish to create. They will bring their own knowledge and capabilities to help shape the developments created. For instance, some architects have led the way in introducing sustainable buildings to the development industry.

Another set of actors who operate locally, regionally, nationally and internationally. The main estate agents have a global presence and provide a wide range of property services to clients. They will certainly employ surveyors who carry out valuations of land, property and other real estate investment opportunities. In 2016 CBRE was the world’s largest commercial real estate agent employing 75,000 people in 450 offices worldwide. A number of other UK-based agents work globally including Colliers International, Cushman & Wakefield, Jones Lang LaSalle, Knight Frank, and Savills.

As we noted in the quiz, various types of engineer will be hired by developers and construction companies to provide expert advice on different aspects of the development process. As many brownfield sites require decontamination and clean-up, environmental engineers are often important players. Other consultants involved in brown redevelopment projects cover landscape design, ecology, transport, public relations, marketing and town planning.

Construction companies will often be given the job of both cleaning-up brownfield land and then constructing the commercial buildings to be developed. Given the extra risks involved they might become involved in a partnership arrangement with the developers and landowners. Housing developers tend to undertake clean-up and building themselves, but possibly hiring specialist engineering consultants or firms to help with land remediation.

Investors come in many shapes and sizes, but the main investors in commercial real estate are the ‘financial institutions’ which include insurance companies, pension funds and investment trusts. Most of these institutions operate on a global basis owning property in the main commercial centres, like London, New York and Hong Kong. Outside of the main cities other investors tend to be more active, like sovereign wealth funds, wealthy individuals and specialist investment funds. They often have a less risk-averse attitude than the financial institutions and have played a more prominent role in brownfield redevelopment in smaller cities and towns. Investors hold property as a long-term investment asset, so they operate differently from banks, who tend to provide short-term finance to developers to cover the initial development period.

High street banks will lend money to developers to get their scheme completed. They usually provide short-term finance to cover the development period to help pay for the land, infrastructure and other construction costs. They will evaluate the proposed development to estimate the risks involved and the interest they charge might reflect this. The loans are often secured against the development, so if developers go bust the banks might be left holding a half-completed scheme. This has happened during downturns in the property market meaning that short term finance suddenly becomes rather longer term!

Developers tend to specialise in certain types of property, such as houses, shops or offices. This gives them some expertise in their chosen sector. The same applies with regard to locality, with regional-based development companies having a good understanding of the variations in their trading area. Smaller development companies might just operate in one town or city whilst global development companies, like Lendlease, will develop property in many countries.

Building occupiers can be owner-occupiers or tenants. They can be individuals or families (for housing) or companies (for commercial buildings) and they will have variable influence on the nature of the completed development depending on:

Many brownfield sites sit within an urban area and are often surrounded by existing residents, which might be affected by the development in various ways. They could gain opportunities for employment, housing, leisure or shopping but might also lose out because of traffic congestion, job loss (through closure or relocation of existing firms), or gentrification (when their rents are increased or the social character of their communities change). Local residents can therefore be supportive or antagonistic towards brownfield redevelopment or to different aspects of it.

People with particular interests often join with like-minded people and form organisations to represent those interests. In terms of brownfield development some of the most active groups are those trying to protect or enhance environmental and heritage assets, like wildlife habitats or historic buildings. Brownfield sites often contain these kinds of buildings or areas, so these groups regularly lobby local and central government to protect them in the redevelopment process. Some of the most ‘successful’ brownfield regeneration schemes have implemented a more ‘organic’ approach by restoring existing buildings and incorporating ecological areas into the scheme.

Local authorities are likely to have many ‘hats’ to wear in brownfield redevelopment. They often own brownfield sites (totally or in part) and will seek to gain ‘best value’ from this asset, just like private landowners. They will need to decide the planning applications for the redevelopment, taking into account the views of the many stakeholders, like local residents or environmental groups, and evaluate the proposals against local and national planning policies. There are a number of other departments in local government that will be consulted about the scheme, like housing, transport, education, economic development, environmental health, and social services. All these ‘hats’ means that the final decision by local politicians might require a fair amount of internal negotiation and compromise!

In the same way that local government is made up of different services and sections, central government departments will have their own policies and priorities, which might not always be working towards a common objective. Internal coordination and negotiation might be required to support brownfield regeneration between government ministers and departments that deal with planning, taxation and finance, national economic policy, environmental regulation, urban regeneration, crime and security, regional policy and social welfare. There can also be a number of special purpose government agencies that fund or regulate environmental quality, urban and regional regeneration, heritage protection, economic development, training and the like. These agencies are often directly involved in major brownfield projects seeking to achieve their objectives.

Private (and public!) landowners are likely to be key actors in brownfield development. They might be reluctant to sell their land, and certainly at the value that developers think is reasonable given all the costs and risks involved. Research by academics have shown that there are many types of landowner holding brownfield sites and they have an equally wide range of interests, motives, strategies and attitudes that will affect whether and how brownfield land is redeveloped and when.

Previously developed land often has a good range of physical and social infrastructure within easy reach, but one of the difficulties with redeveloping it is that some of that infrastructure (like power lines, sewers, roads, gas and water pipes, railways, electrical plant and rivers) might be on, under or beside the site! Dealing with some of these ‘constraints’ can involve a lot of negotiation and cost on the part of the developer or local planning authority. Irrespective of this, these and other services have to be provided for in order to make the new buildings and areas work effectively, so the utility companies who own and provide these basic services have to be involved in the planning and development process.