Cherryville as a Protest Model

As an example of a protest model, Cherryville is probably bigger than those you may have seen and needs some kind of a larger scale model. In this article, we will investigate the same model from a bird’s eye view, in a similar way that IT specialists would show it to Cherryville authorities. Let’s look at how the model would appear and work in 3 different conditions depending on the composition of the town’s population. 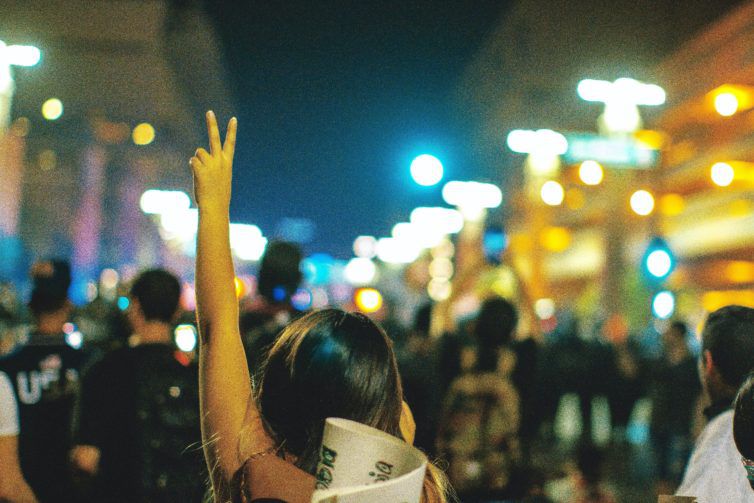 As an example of a protest model, Cherryville is probably bigger than those you may have seen and needs some kind of a larger scale model. In this article, we will investigate the same model from a bird’s eye view, in a similar way that IT specialists would show it to Cherryville authorities. Let’s look at how the model would appear and work in 3 different conditions depending on the composition of the town’s population.

First, let’s imagine that in Cherryville people are very socially engaged. They care a lot about their city and its symbols, so they reacted very strongly to the risk of losing the Cherryville Chocolate Dipped Cherries brand. Many people decided to protest by putting transparents in their yards. As they are the first ones to protest (their threshold is equal to 0), they are called the initiators. Those citizens will always protest, no matter what the neighbours around them are doing. Let’s see how this town could appear from a bird’s eye view. 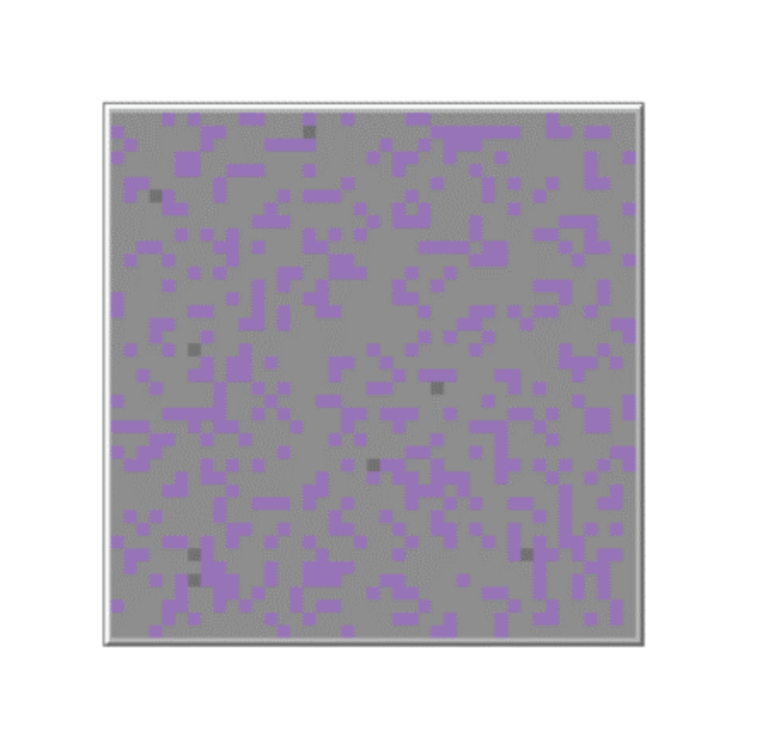 Purple is the colour of the protesters. Grey is for those who are not protesting (yet). There is one more colour in the picture – it’s dark grey, which points out the people whose thresholds are above 100%. This means that they would not join the protest, no matter what.

As it was already said, the people of this town are socially engaged, which means that in general they are rather eager to protest. It does not mean that they are all initiators! However, there are some people who will join the initiators instantly (those with low thresholds or those who are surrounded by the initiators) and some will join later on. 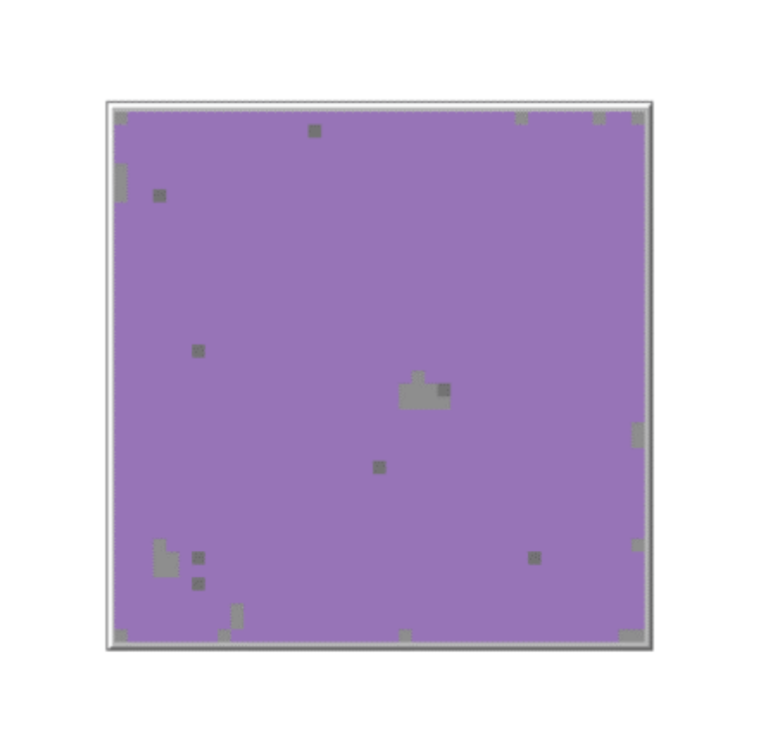 Let’s look at a different possibility. Here, the community is not that socially engaged. The citizens are not keen on protesting, as most of them are not even aware of the current affairs in city hall. The decision of local authorities to sell Cherryville Chocolate Dipped Cherries brand was met with almost no response. The citizens have, on average, a very high threshold. The Cherryville protest map might look like this in the beginning: 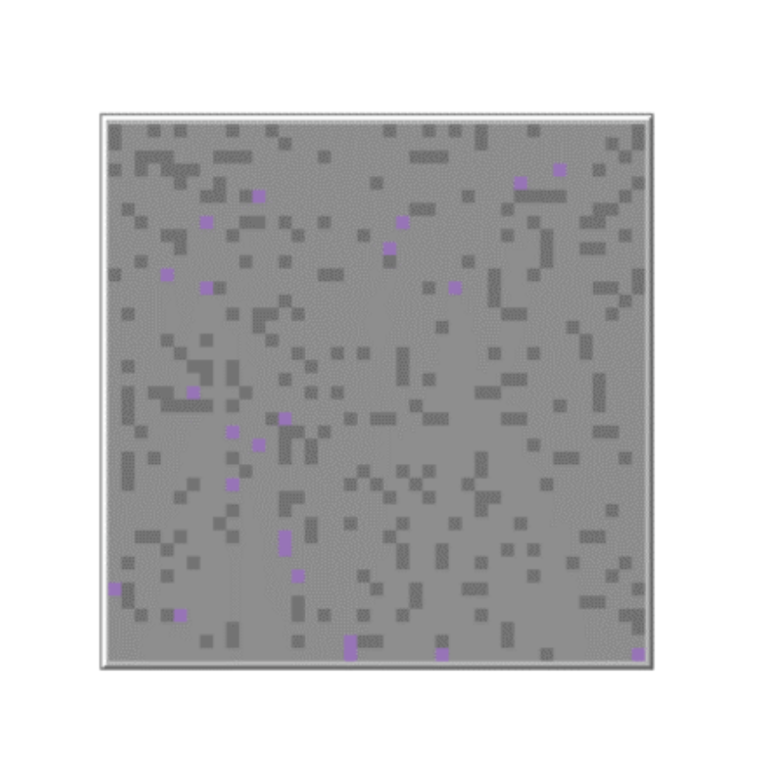 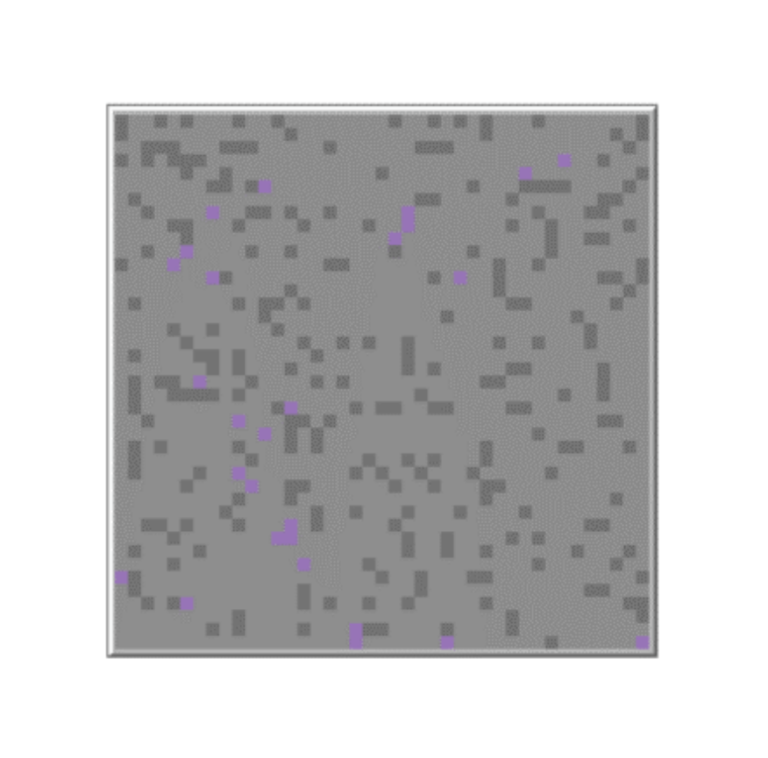 Notice that only a few people have joined!

What could happen if the population of Cherryville was very diverse? Some citizens are very involved in public life, some less, but almost everybody has a basic knowledge of city affairs and is informed about the situation. They may not be happy about it, but they are not furious either. The decision of selling the local brand would be met with objections and the protest starts as there are some initiators there. After that the protest begins to spread. This is our starting point.

And this is how the map looks like this at the end (meaning that from then on, nobody else joins the protest. The process stabilises at this point). 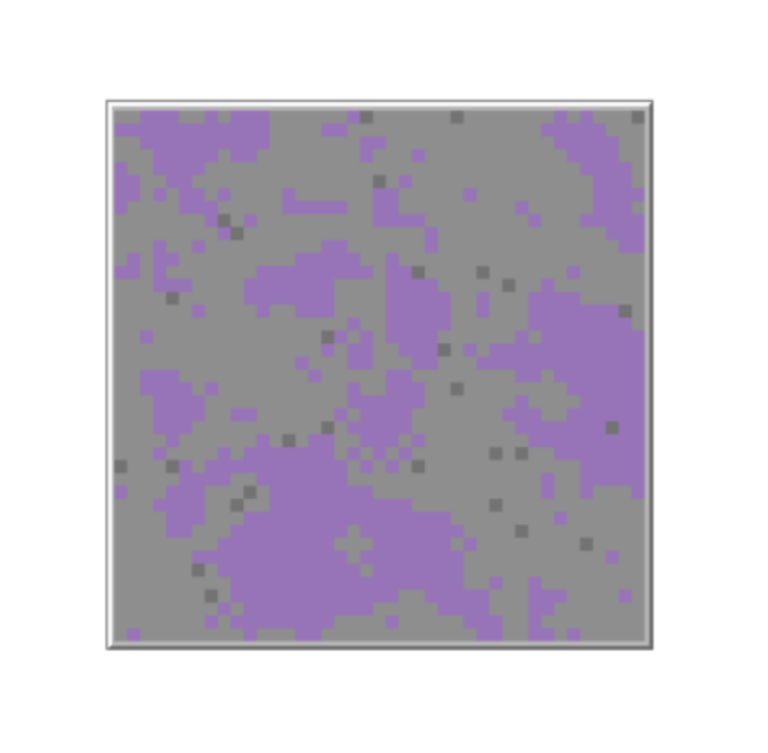 What you can see here are some stains of colour, areas where the protest spread and those where it didn’t. Those “stains” or “clusters” have different sizes and shapes. What is important is that they are clearly distinguishable from the grey environment around. Is it just what randomly happened in this town or can we expect such a result in other similar towns and, if so, why? We will get back to these questions later on, after investigating spatial protests in a series of simulations.

And now let’s think about another dimension of differences between three situations described below. Please imagine that you are going for a walk in Cherryville. In the first case you will just see hundreds of flags. In the second one you will probably have to walk for quite a while to see more than one or two flags. In the last one you will either be in a “purple” surrounding or in an indefinitely “grey” surrounding, almost like crossing some invisible lines! From the point of view of Cherryville inhabitants it means that if they are in a purple cluster, they will practically not meet those who won’t protest.

Do you recognize this clustering of opinions in areas you live in or live close to?