Find out more
Home / Politics & Society / The Politics of Economics and the Economics of Politicians / Erhard, the Social Market and Ordo Liberalism

The terms 'Social Market' and 'Ordo Liberalism' are associated with Ludwig Erhard's economic policies. In this article, Sir Vince Cable defines them. 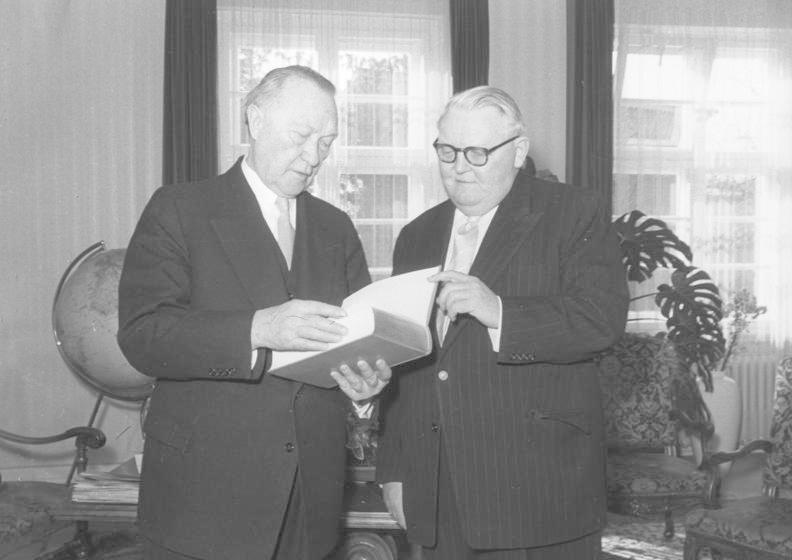 The terms ‘Social Market’ and ‘Ordo Liberalism’ are often associated with Ludwig Erhard and his economic policies. In this article, Sir Vince Cable attempts to define these terms.

Ludwig Erhard, as finance minister and then Chancellor, was the main political author of post-war German economic recovery: the ‘wirtschaftswunder’. He presided over an extraordinary period of economic recovery after the destruction of much of Germany’s industrial base and infrastructure at the end of World War II. Much of the credit for the rapid turnaround of Germany is often given to the radical economic policies he introduced including a bonfire of price and other controls.

He was both a politician and an economist and he had a clearly defined set of philosophical principles which guided both. He was a political and economic liberal who had opposed both the authoritarian politics and state-controlled economic model of Hitler’s National Socialism. But ‘liberalism’ and market economics, and Erhard’s application of them, have been interpreted in different ways. There are two concepts in particular where language has been used in conflicting and confusing ways.

He was an advocate of the ‘social market’ (social markt). This has been widely interpreted by advocates of the ‘middle way’ like Bill Clinton and Tony Blair as a validation of their ‘mixed economy’ approach combining market forces and the private sector with government intervention and social spending. To others, the social market meant nothing of the kind. It meant a free enterprise, market, economy underpinned by social stability and an agreed set of values: not an activist state. You can follow the controversy by reading an article entitled ‘The German Economic Miracle’.

But there is a powerful counter attack on the ‘myth’ that Germany was ‘liberated’ by ‘laissez faire’ policies. It points out that Erhard’s policies were much more balanced and gradual than claimed by those describing Erhard as a free market ideologue.

Ordo and Other Liberalisms

Erhard belonged to a group of thinkers who described themselves as ‘ordo-liberals’. This term has rarely been used in the English language. As a result the word liberalism, as used in the context of Germany, has been subject to enormous misunderstandings and misrepresentations. In continental Europe parties promoting liberalism tend to be ‘right of center’ advocating free market and pro-business policies and suspicious of a powerful state. In the USA, liberal tends to mean the opposite: left of center, supporting more rather than less taxation and state intervention.

But even within the broadly European definition of liberalism there are variants. Neo-Liberalism has become a generally used, and rather abusive, term describing policies which strip away state protections, barriers to trade and investment and government spending. The implication is that capitalism operates in a disruptive, chaotic, unregulated manner (and, of course, the crash of 2008 gives ample justification for characterizing financial markets in this way).

A quite different take on liberalism is ordo liberalism: a school of economic thought which has been massively influential in Germany throughout the post-war era; Erhard was an early advocate. Ordo Liberalism, as the word implies, is liberalism within order: a free market economy operating within an orderly framework of rules and disciplines. Applied to micro economics, ordo liberalism means strict competition laws.

But it has a macroeconomic meaning: a belief in balanced budgets combined with a central bank charged with a mandate of price stability. The credibility of policy rests on its constant, inflexible, application; bending the rules means that they are no longer taken seriously. In the Eurozone crisis we have seen ordo-liberalism applied in the form of disciplines imposed on Greece in particular.

Several writers have tried to sort out the different meanings of liberalism and, in particular the following:

Which of these terms do you think is most misused in economic debates. Please share your thoughts in the comments below.