By the early second century AD Portus was the central node in what might term as a “port-system”. This demonstrates the large scale and complexity of 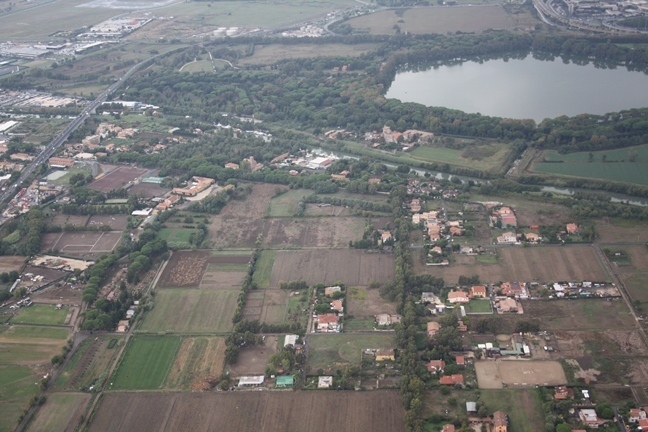 By the early second century AD Portus was the central node in what might term as a “port-system”. This demonstrates the large scale and complexity of the port infrastructure at Portus. In the top right of the image above you can see the great hexagonal basin of Trajan. Running diagonally across the image immediately in front of it you can see the Fiumicino canal that was originally built by Claudius in the middle of the 1st c. AD, thereby defining the northern edge of the Isola Sacra. The line of trees running towards the Fiumicino canal on the left hand side of the picture marks the line of the Via Flavia and Isola Sacra cemetery.A short distance to the right of this ran the great Portus to Ostia canal built during the reign of the Emperor Trajan. Communication between Portus and Ostia and the commercial district of Rome, was articulated by a network of such canals and the river Tiber itself. Our work has greatly increased understanding of a key part of this, the Isola Sacra, that lies between Portus and Ostia. It has revealed a massive new canal running south from the Fiumicino Canal (the Fossa Traiana) and parallel to the cemetery alongside the Via Flavia, field divisions, and warehouse complexes. – Can you spot it in the image below, and the potential island in the middle of it? 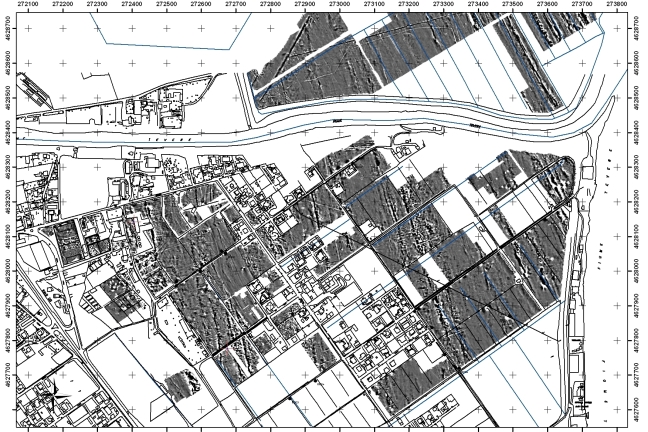 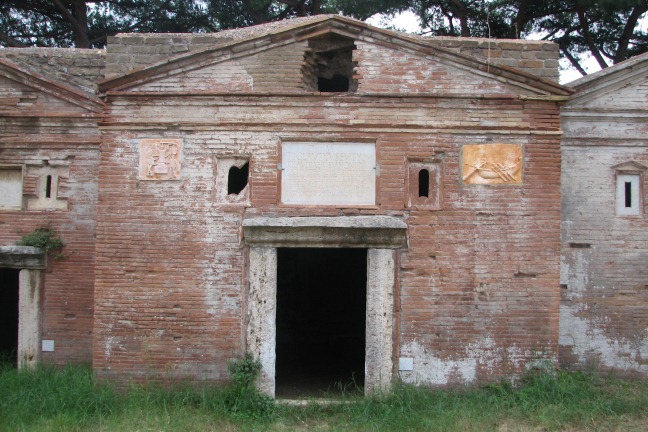 View Course
All of these elements – basin, canals and roads – were key elements in a broader network of port infrastructure that was focused upon the supply of Rome with foodstuffs and other material from across the Mediterranean.The maritime ports of Portus and Centumcellae (Civitavecchia), the river port of Ostia, stopping points along the Tiber and the commercial quarter (Emporium) on the banks of the Tiber at Rome were the main nodes in what could be described as the ‘port system’ of Imperial Rome, while the canals enhanced communication between them. It is unlikely that this was the end result of a long-term strategic plan to develop port infrastructure, and was certainly never described in this way by the ancient sources. It was more a long-term consequence of a series of short-term decisions taken by administrators.We can see similar kinds of development in other parts of the major ancient Mediterranean, where there was a need to develop infrastructure in order to ensure the regular supply or large urban populations. One thinks, for example, of Athens and the port of the Piraeus, Alexandria and the ports on the inland lake of Mareotis, and Antioch and the port of Seleucia Piereia. However, the “port-system” of Rome was exceptional in terms of the very large size of the urban population that it had to serve – in the region of 800,000-1 million people.

The Porticus Aemilia was originally built from opus caementicium in the 2nd c. BC and extended for c. 500m along the east bank of the Tiber. It comprised a series of parallel bays that have long been interpreted as having been intended for some kind of storage. More recently, it has been suggested that the building was in fact a navalia – a building originally intended to house the Roman fleet during the Republic. In a sense, therefore, the building has similarities with Building 5 at Portus in terms of its layout and, possibly, its function. Ongoing excavations have attempted to clarify its function, identifying important periods of transformation under Trajan and during the late Antique period. 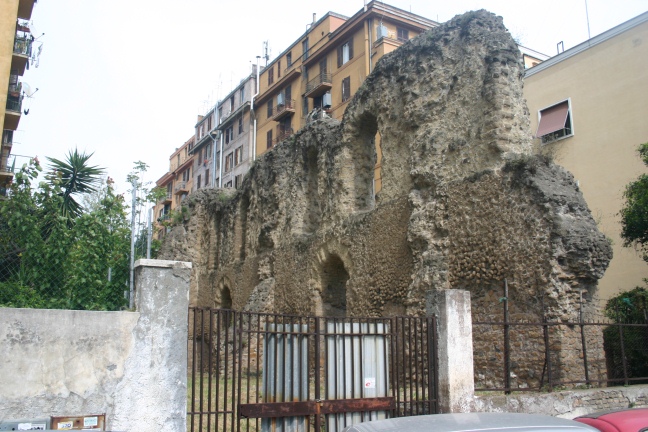 A stretch of the back wall of the structure known as the Porticus Aemilia – a massive public building of 2nd c. BC date close to the Tiber in the Emporium at Rome that continued in use well into the late Imperial period. The form and, possibly the function, of the building are similar to Building 5 at Portus – Simon Keay © University of Southampton

Puteoli (Pozzuoli) was a very important maritime port located on the northern end of the Bay of Naples. It was originally founded as a Roman colony in 194 BC and for much of the Republican and early Imperial period down to the establishment of Portus, acted as Rome’s principal maritime port. Ships arrived here from all over the Mediterranean, but particularly the east. Their cargoes would have been stored in warehouses here prior to be loaded onto smaller coastal craft for transport up the coast past Minturnae, Tarracina and Antium in order to pass through Ostia on their way up the Tiber to Rome. Neighbouring major ports in the Bay of Naples were the Imperial fleet bases of Portus Iulius and Misenum to the west, and Neapolis (Naples) to the east. Cumae, which lay on the Tyrrhenian Sea to the north, was linked to Puteoli by road.

You will already have seen that there are quite a lot of similar terms in use on this course. For example, we have already seen at least three different canals. If you aren’t certain which is which then have a look at the Glossary to compare “Fiumicino Canal” (Fossa Traiana), “Trajanic Canal” (Canale Romano) and “Portus to Ostia Canal”. The plans on the Resources step also help here. Why not print out and annotate your own plans? 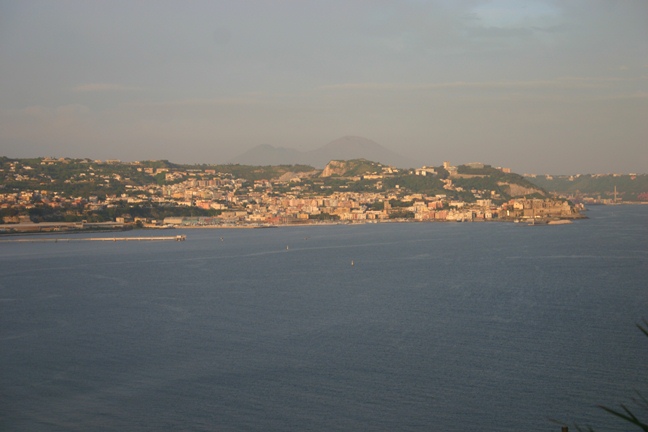 View of Puteoli from the sea, with Vesuvius behind – Simon Keay © University of Southampton 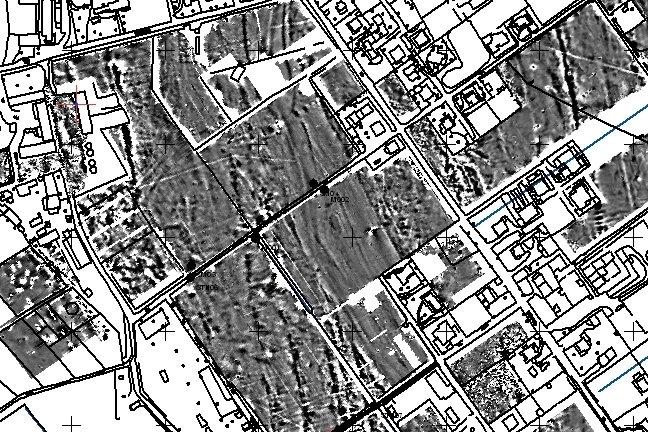 Zoomed view of the proposed canal, which has been confirmed through palaeoenvironmental coring – Kristian Strutt © University of SouthamptonDiscussion topic:Did you find what we think might be the canal and an island? You are looking at magnetometry data here. We will discuss this method of seeing beneath the soil next week, but for now what did you base your interpretation of the image on? What do you think the different shades of grey in the magnetometry data mean?
© University of Southampton

Hi there! We hope you're enjoying our article: The port system
This article is part of our course: Archaeology of Portus: Exploring the Lost Harbour of Ancient Rome