Brick stamps from Ocriculum and elsewhere

Brick stamps from Ocriculum and elsewhere.
View transcript
5.3
SIMON KEAY: Now, brick stamps are another really important source of information for understanding Portus. This time, however, it’s more to do with the supply of the building material that was used to put up the many brick-faced buildings that you can see around you at the port. We know that, for much of the imperial period, there were a series of major brick works up the River Tiber, to the north of Rome, in the vicinity of the modern town of Orte, or the ancient port site of Ocriculum. And around here, surveys by archaeologists have suggested that there are workshops producing many of the bricks that appear on buildings in imperial Rome, and at Portus, and at Ostia.
56.7
And which indeed are also exported outside of Italy as well, and then found in parts of North Africa, but in smaller quantities. The key thing is that a substantial proportion of these bricks are stamped. And certainly, if the period of the later first and second centuries AD, a lot of them have very, very distinctive circular stamps. And these stamps have the name of the workshop, or the officina, where they were produced. And also the names of the consuls who were in power at the time that the stamps were made.
97.1
Put the two together, this kind of information allows us to understand very well, or at least better, the supply networks between the workshops and the building sites– at Portus, Ostia, and so on– and the individuals who mediated the supply and their relationship to the imperial house. And at the same time, the fact that they are dated provides us with very, very important information about the date of the building in which these stamps were used. So if a stamp is primary– in other words, if it’s used at the time the building is originally constructed– it gives us a terminus post quem, or a time after which that building must have been put up.
144.7
And usually we calculate– to date any particular building or wall, we need about four or five of these stamps to be absolutely sure that we have the right terminus post quem.

It is wonderful to be able to put such precise dates to objects that are so old, and that are thankfully also fairly common. In this video we have learned about the use of bricks at Portus and about the very many brickworks that were established in the Middle Tiber Valley in the vicinity of Orte and Ocriculum, with workshops producing millions of bricks. These bricks formed the inner and outer faces of the concrete walls from which most of the buildings at Portus, Ostia and Rome itself were built for much of the Imperial period. They are particularly useful to us because many of the bricks dating to the later 1st and mid to later 2nd c AD were marked with an impressed stamp that provides us with information about the brick yard (figlina), the brick manufacturer (officinator), the manufacturer’s workshop (officina), the owner of the land on which the brick yard was located (dominus), and the exact date when they were made: the last was expressed in terms of the name of the reigning consuls. 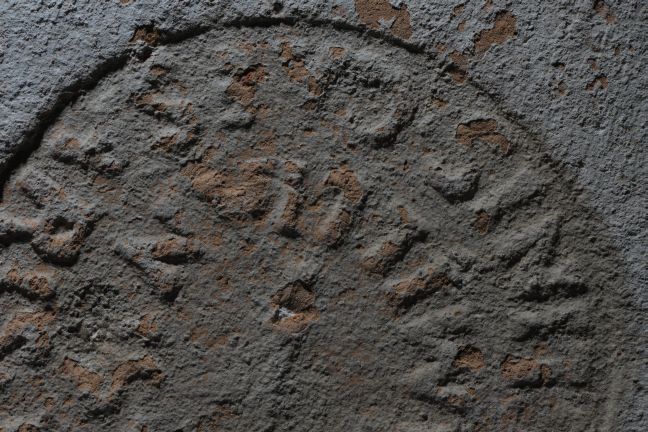 A brick stamp found in the Castellum Aquae during its survey – Graeme Earl © University of SouthamptonThe bricks were transported down the Tiber to Rome in barges, and those bound for Portus and Ostia would have continued their onwards journey, with the products of different manufactories being assigned to various buildings projects in differing batches and combinations that tell us something about how building projects were organized. They are also useful to us because careful consideration of the exact date of a number of these stamps from a building helps us to date it. These dates give us a terminus post quem for the part of the building from which it derives.Remember that “terminus post quem” means the “time after which” a particular archaeological event must have taken place – and is a fundamental aspect of archaeological chronology.Next we will look at one particular brick stamp in detail.

Hi there! We hope you're enjoying our article: Brick stamps from Ocriculum and elsewhere
This article is part of our course: Archaeology of Portus: Exploring the Lost Harbour of Ancient Rome