What have landscape archaeology and geophysics told us about the site of Portus?
View transcript
5.5
SIMON KEAY: Landscape archaeology and geophysics has been very, very important for Portus. In fact, going back to 1998 before the Portus project started, we undertook a major campaign of geophysics over an area of some 200 hectares looking, not only at the areas clustered around the Trajanic and the Claudian basins, but also the flat lands between both of those basins and the river Tiber and increasingly the area to the south of Portus. And what the geophysics is telling us is– it’s giving us very important information about the canal system, which we didn’t really know about before we started this work.
56.4
It’s told us about the existence of the great transshipment canal, the Canale Romano which runs past the hexagonal basin and flows into the Tiber. It’s told us about the existence of the great northern canal, which we think probably dates to the Claudian period. And most recently in the context of the Portus project, it’s told us about the canal which runs southwards from Portus through the block of land that lies between Portus and Ostia Antica, the Isola Sacra, and runs due south. So the geophysics has told us that.
92
And landscape archaeology, in general, has also been useful, enabling us to better understand the topography by undertaking surface sherding where necessary, to date and perhaps get some idea of the function of some of the features that we’ve found due to the geophysics. But also, in doing detailed topographic work, topographic surveys particularly, on those areas that we’ve subsequently excavated. And indeed, the hallmark of our work at Portus has been particularly in the area where we’ve been working around the Palazzo Imperiale and the Navalia has been integrating these techniques, geophysics, surface survey, topography, in order to extract the maximum amount of information about buried structures in order to decide subsequently where to undertake our excavation in a question and answer mode.

You will know by now that one of the challenges that we have faced in trying to learn about the layout and development of Portus has been a methodological one. What kind of strategy should one use to extract the maximum amount of information in as short a time scale as possible, without causing damage to the buried archaeological remains? We have opted for one that combines different techniques, since each of these tells us something different about the port. Thus we have used geophysics to learn about the extent of the site and the spatial relationships of the large features like canals, basins and big warehouses to one another – an approach that was particular helpful in the flat area between the hexagonal basin and the Tiber, where we discovered all sorts of new structures that made us re-think our understanding of the hinterland of the port.The canal system is best appreciated on the map of this period, linked and also shown on a zoomed map below. Look out for the Trajanic Canal (what I called the “transhipment canal” or Canale Romana), the northern canal and the southern canal. We have also been doing this in the Isola Sacra to the south of Portus, locating a massive new canal, and very recently even finding out that the neighbouring river port of Ostia was substantially bigger than had been generally understood.In many cases we have been able to provide complementary information about the character and chronology of some of these new buildings by collecting archaeological material lying on the surface of them, a technique known as surface sherding. However, there is a limit to what this kind of approach can teach us about individual buildings such as the Palazzo Imperiale and the navalia, and in order to find out more about their layout, function, decoration and development, we have used open-area excavation, using the geophysical results as our guide when thinking about where best to excavate.Naturally, of course, any excavation is preceded by a careful topographical survey of the ground surface and scanning of standing buildings to provide further clues and then conducting the excavation within an entirely digital recording strategy. Since, therefore, all of our survey and excavation is “born digital” it becomes possible to draw it altogether to create 3D reconstructions of standing buildings. That, however, is another story. 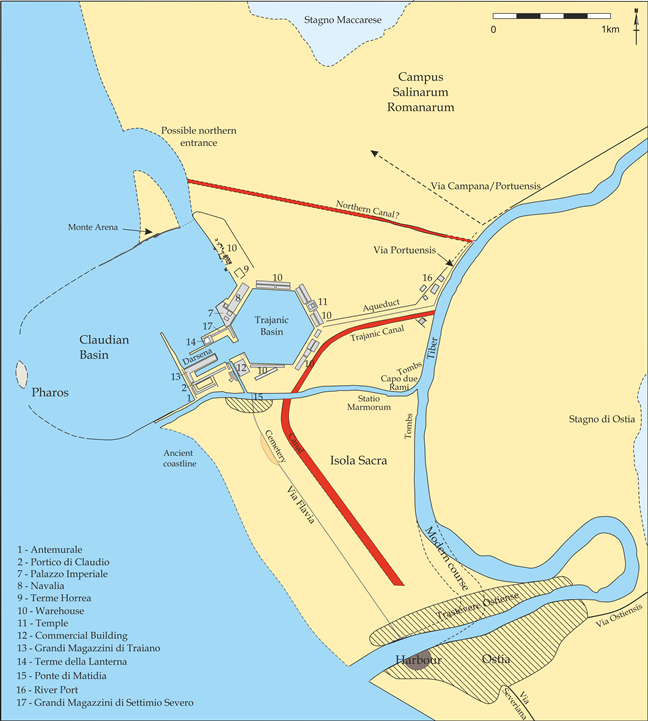 View Course
Simon also mentioned two technical terms – surface sherding and topographic survey. Topographic survey refers to mapping the shape of the land, which can indicate buried structures. Surface sherding is the process of walking across ploughed fields and recording the archaeological material (in this case sherds of pottery). The distribution of these sherds frequently gives us an insight into the buildings that lie beneath, and the activities that took place in the past.Next you will hear from Kristian Strutt in a step discussing the wider landscape, and then you will learn about geophysical techniques. We combine these with other methods to get a picture of how the site of Portus was arranged, and also what areas to concentrate our excavations on.

Hi there! We hope you're enjoying our article: Introducing landscape approaches to the port
This article is part of our course: Archaeology of Portus: Exploring the Lost Harbour of Ancient Rome
close