What exactly is geophysical survey?
View transcript
4.7
ANITA THOMPSON: What are the different types of geophysical survey?
7.9
KRISTIAN STRUTT: We have a number of different types, depending on whether you’re wanting to do kind of extensive survey and cover large areas very quickly. Or whether you’re trying to target different areas. Or whether you’re trying to do tomography and survey in three dimensions. So, generally, in archaeology the kind of workhorse of archaeological geophysics has been magnetometry and resistance survey. And then you get into things like Ground Penetrating or Probing Radar, GPR for short. Or Electrical Resistivity Tomography, or ERT for short. But there are the techniques that are used as well. You can use things like magnetic susceptibility survey. And you can use electromagnetic survey as well. So there are a variety of techniques.
48.7
FRANZISKA MARCHESELLI: Can you explain a bit more about what exactly ERT is?
54
KRISTIAN STRUTT: ERT is imaging basically through sectioning or imaging sections through a particular thing. And in terms of archaeological survey, Electrical Resistivity Tomography uses apparent resistivity measurements to do that. And Lizzie’s been working on some of that here at Portus, so she will be able to tell you more.
75.7
FRANZISKA MARCHESELLI: So Lizzie, you have been doing ERT here at Portus. Can you explain a bit more about exactly what you are doing?
81.6
LIZZIE RICHLEY: So we are currently taking a series of sections across Portus using Electrical Resistance Tomography. And it works by taking a series of different levels through the ground. Initial level is quite close, and we always use four probes to take each data point. But the further apart these probes are, the deeper we can actually go. So the more probes we use, the deeper we can potentially measure the depth of. And with this technique, we can then pick out different areas of resistivity, which is highly dependent upon the actual materials below the ground and the actual water content of the ground itself.
115.1
And so we can hopefully pick up different bits of walls, bits of masonry flooring, and feasibly even the canals which were present here, and feasibly even down to the natural geology beneath.
129.7
ANITA THOMPSON: So Kris, you mentioned magnetometry. Could you explain a bit more about that?
133.6
KRISTIAN STRUTT: Yeah, of course. Basically, in archaeology, you use an instrument called a flux gradiometer. And it has a number of sensors attached to it. You walk across a survey area, and the sensors measure the changes in the Earth’s magnetic field across the area, at different points in the area. The Earth itself has a magnetic field. We all know about that. It’s generated by current moving in the centre of the Earth. Different materials under the ground locally can be measured using local variations in that magnetic field. So anything that has been fired above its Curie point , things that are built out of volcanic rock, kilns, furnaces, et cetera. They can be located using magnetometry.
172.2
Also any changes in the soil where you have an increase in magnetite or maghemite in the soil, things like ditch fills. They can also be recognised because they can be picked up as a local variation in the electromagnetic field. So you survey using magnetometry of an area. It means you can carry out a survey very, very quickly, covering a hectare and a half or two hectares of a site in a day. And it can be used for a kind of very broad landscape approaches to look at the types of archaeology that are under the ground.
199.5
FRANZISKA MARCHESELLI: Earlier you also mentioned Ground Penetrating Radar. Can you go into a bit more detail about that please?
206.3
LIZZIE RICHLEY: So Ground Penetrating Radar can be used across a wide variety of sites as well. Much like magnetometry and resistance. You can use it in most places. It is highly dependent sometimes depending upon what sort of ground penetration you use. We use one on a cart here, which means we can take it over quite diverse topology. And this machine works by having a small antenna and a receiver. And our one is incorporated into one box. And we are sending out an electromagnetic wave into the ground, or a radar wave. And we are then measuring the speed at which this wave returns, is reflected off different interfaces and different materials in the ground and is then returned to the receiver.
246.7
The speed of this is highly dependent upon what is beneath the ground, the soil type. Once again, the water content, as with ERT. This can conduct the EM wave away from us. And we then do not get a very strong signal. At which point, sometimes it can be very hard to do some GPR in some survey conditions. But with this, we can get high resolution images of the ground, and also the depth of features. So we can see the relative depth between one feature and another and are able to produce planned type images when we join together a series of traverses of GPR.
279.6
And we can create a plan image tracing walls of features and buildings and feasibly getting a whole image of the site that we are currently surveying. We can get different sorts of radar as well. We have different bandwidths of EM wave. And so our one we use is 400 megahertz one. We can get data to approximately 5 metres with quite high resolution. We can use a 200 megahertz one, which goes down a lot deeper. We can get up to about 11 metres with it if we’re lucky. And you can use 1,000 megahertz antennas, which only go down about 50 cm, and gets very high detailed resolution of behind walls and features just below the surface.
319.7
So depending on what you’re looking for, we tailor our survey to that.

Terrestrial geophysics allows us to see beneath the soil, giving an insight into buried buildings and other archaeological and geological information. Methods covered here include Electrical Resistance Tomography, Magnetometry and Ground Penetrating Radar. Looking back at the video it’s clear that Lizzie and I have used a lot of technical terms! I’ll explain these here, and please do comment below if things aren’t clear, or to provide help to your colleagues on the course. First off, it is important to think about what we want to learn from the geophysics. Do we want to cover a large area quickly as a kind of coarse survey, or look at a smaller area in much more detail? Realistically, we can only gather and process so much data so this is an important decision. We also need to decide whether to get the equivalent of an aerial photograph down through the soil – a top-down view of everything underneath, usually using Magnetometry – or whether we want to be able to examine the soil in three-dimensions. In the video I called this latter approach tomography which will be familiar to any of you from a medical background – x-ray computed tomography is a common way of “seeing” inside people for diagnosis. We do it on a much coarser resolution of course! And we don’t use x-rays but instead use radar pulses or electrical pulses. Magnetometry can be carried out very quickly over large areas and gives an indication of changes to the earth’s magnetic field below the sensor. A fluxgate gradiometer is one such magnetometry instrument. 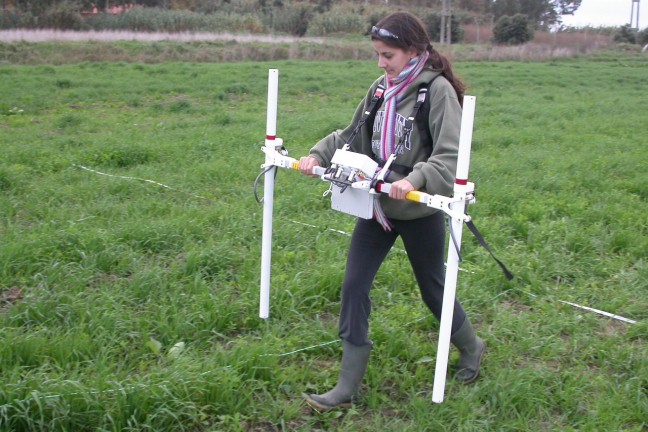 A fluxgate gradiometer in use at Portus – Hembo pagi © University of Southampton I mentioned the “curie point”. This is the temperature at which the magnetic properties of a material are changed to align to the local magnetic field, and can be a valuable dating technique for prehistoric sites. 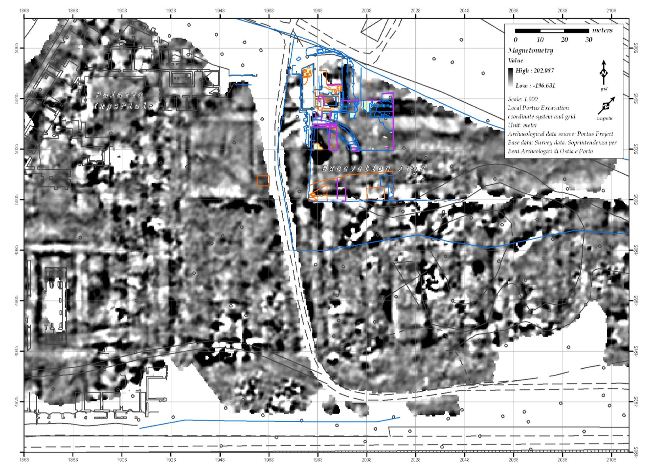 Magnetometry data from the Imperial Palace area, including the Amphitheatre, Castellum Aquae and Building Five – Jessica Ogden and Kristian Strutt © University of Southampton Lizzie explained GPR (Ground Penetrating Radar) clearly in the video. She did talk about “traverses”which may not be a familiar term – these are the single lines of data recorded as we push the cart carrying the GPR over the ground. She also mentioned the different frequencies of antennas. At Portus we mostly use a 400 MHz antenna. As Lizzie says this lets us see about 5m under the ground. The 200 MHz antenna penetrates much further (down to about 11m) but usually with less resolution. Finally the 1000 MHz antenna only penetrates about 50cm but with a higher potential resolution. 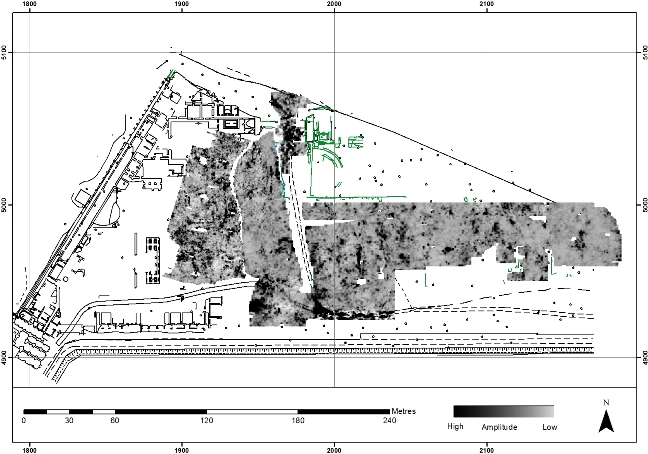 GPR data from the Imperial Palace area, including the Amphitheatre, Castellum Aquae and Building Five – Jessica Ogden and Kristian Strutt © University of Southampton As we said in the video Electrical Resistivity Tomography (ERT) compares electrical resistance between probes in the ground to calculate a vertical cross-section through it. Imagine having a battery connected to a probe stuck into the soil at Portus. If you put in another probe also connected to the battery a current will flow if there is enough water content in the soil between the two probes. As you move the probes further away the current will fall. If the soil is of the same type this fall will relate to the distance between the probes. However, if there are other objects buried in the soil the current will change. By comparing the current between lots of pairs of probes at different separations and in different locations we can build up ‘slices’ through the ground. 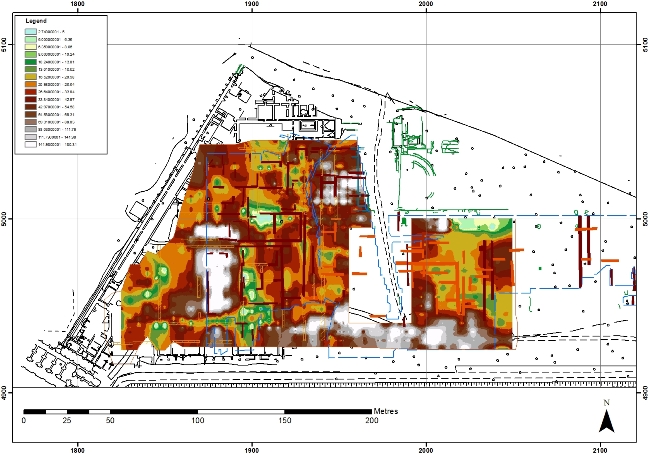 ERT data from the Imperial Palace area, including the Amphitheatre, Castellum Aquae and Building Five. The lines are walls interpreted from the GPR data overlaid onto the ERT. Different colours indicate the possible ground and first floors – Kristian Strutt © University of Southampton After all that technology it’s time to return to some standing archaeology. Let’s listen to Simon talking about the Grandi Magazzini Di Settimio Severo.