Find out more
Home / IT & Computer Science / Literature in the Digital Age: from Close Reading to Distant Reading / What is the message of ebooks?

What is the message of ebooks?

Read excerpts from scientific studies on the effects of ebooks on readers and reflect on McLuhan’s claim that ‘the medium is the message’. 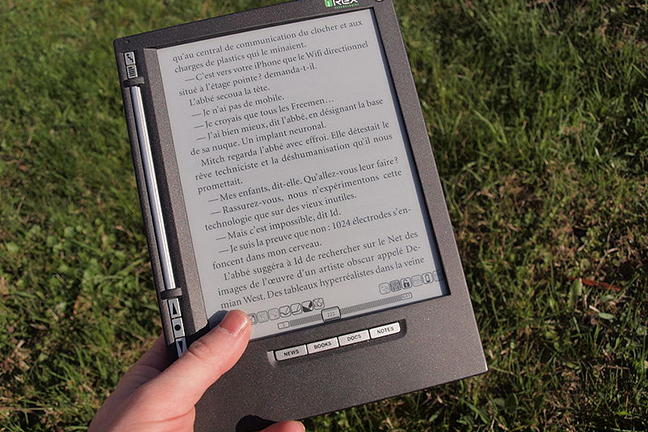 In his famous Playboy interview, Marshall McLuhan elaborates on his most powerful statement that ‘the medium is the message’ (Understanding 7) by noting that ‘the content or message of any particular medium has about as much importance as the stenciling on the casing of an atomic bomb’ (‘Playboy’ 238).

What McLuhan focuses on instead are the psychological and social effects of new media, ‘the change of scale or pace or pattern [they] introduce into human affairs’ (Understanding 8).

Perhaps, ebooks are still too young a medium to fully assess their psychological and social effects, but several studies already give partial answers. For instance, in an article published in the Proceedings of the National Academy of Sciences, Daniel Aeschbach and his co-authors document the following findings:

The use of light-emitting electronic devices for reading, communication, and entertainment has greatly increased recently. We found that the use of these devices before bedtime prolongs the time it takes to fall asleep, delays the circadian clock, suppresses levels of the sleep-promoting hormone melatonin, reduces the amount and delays the timing of REM sleep, and reduces alertness the following morning. (1232)

Quite apart from such health effects, Kindle users may want to ask themselves how their reading experience is enhanced or diminished by a number of features not available for print books:

View Course
Finally, the increasing distribution and use of ebooks also has legal, political, and economic consequences. In his essay ‘Disowning Commodities: Ebooks, Capitalism, and Intellectual Property Law,’ Ted Striphas cites both supporters and detractors of the further digitization of books. Among the supporters, one finds early voices such as that of Jack Romanos, the president of publisher Simon & Schuster, who in 2000 predicted that ‘the ebook revolution will have an impact on the book industry as great as the paperback revolution of the 60s’ (qtd. in Striphas 231).
Among the detractors, one finds those who state that publishers’ encryption of ebooks so that they cannot be passed along to fellow readers and friends seriously restricts the right to private property. An ebook owned by someone unable to share it with others is an ebook only partially owned. As Striphas points out:

By ‘activating’ Microsoft’s Reader software, in other words, one cedes to ebook publishers, Microsoft, and other interested parties much of one’s ability to circulate, dispose of, and reproduce the encrypted ebooks one has purchased […]. Digital encryption thus allows authors, publishers, and others to monitor and regulate the disposition of ebooks in ways that exceed existing intellectual property laws (249).

In summing up the position of ‘left-leaning cyber and legal critics’, Striphas notes that they pinpoint

three alarming and interrelated trends […]: first, the accelerated fencing off of the (knowledge) commons; second, the gradual transfer of private property from ordinary people to multinational media conglomerates and other enfranchised interests; and finally, the dampening of human creativity, resulting from intensified restrictions on the circulation and public use of signs (250).