In this step we will discuss the polarization that emerged in Beijing further. 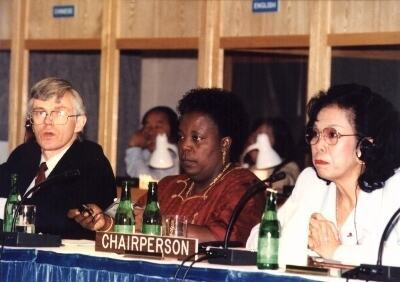 In this article we will dive deeper into the characteristics of the dynamic of polarization so that we can explore how this dynamic emerged in the conference in the following video.

One of the first observations you will make in the next video step is how (male and female) representatives of nation states across the globe voiced their reservations over particular words in the declaration that was negotiated at the conference and was presented it as its result.

The first characteristic of polarization becomes visible, namely that it happens over and through words and language.

You will see various representatives of nation states voicing their reservations, often related to ethics, morality, religion and values. The Vatican in particular, it is said, was ‘blocking, blocking, blocking’.

Secondly, polarization happens through oppositions between groups of actors mutually forcing each other to take a position.

We see this reflected in how the feminist activists present in Beijing who were interviewed for this documentary, speak about an ‘unholy alliance of islamists, christian evangelicals from the US and the Vatican’. The collaboration between these religio-political actors was new, and unexpected. The Vatican, which represents the Roman Catholic Church while also being a nation state, has occupied a unique and influential position within the United Nations and has since Beijing been a leading voice against what they considered to be ‘radical feminism’. 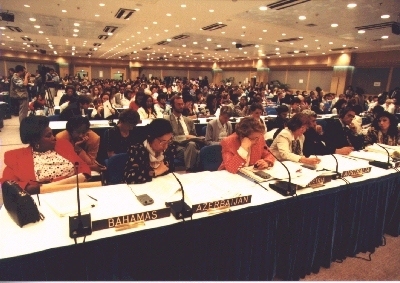 Main Committee of the Fourth World Conference on Women, at its first meeting, held on 5 September 1995 in Beijing. UN/DPI photo 051114 by Zhang Yan Hui, 1995, via UN photo

Another religio-political actor that remains unnamed in the documentary is the Organization of Islamic Cooperation (OIC), consisting of 57 member states in the Middle East, Asia, Africa, and Latin America (Petersen and Kayaoglu 2019). In its intervention during the Beijing conference, the OIC supported the Vatican emphasis on the role of women in the family (Houston 2012). Yet, these were not the only actors, as the feminist activists and the governments advocating a progressive approach to women’s sexuality were fully part of the polarizing dynamic.

It seems as if in Beijing two groups of actors emerged. The first group consists of those who advocated women’s rights to make their own decisions regarding their bodies, their decision to get pregnant, give birth and regarding their sexual wellbeing. The other group consists of those who considered this as a threat to the family and against traditional, cultural and religious norms. The idea that these two groups battle against each other remains influential in global politics until today and is often represented as a polarization between feminists and defenders of family values. It is however a problematic representation of what is underlying the polarization, as it fails to take into account the power relations that allow certain actors and voices a seat at the table of global politics while others remain invisible.

In the following video step you will see how these characteristics of the dynamic of polarization played out in the negotiations over the Joint Declaration.

This step is inspired by the book chapter: Bartelink, B.E. (2022) “Religion, Gender and International development: searching for game changers in the midst of polarization.” in E. Tomalin and C. Starkey (eds.) Routledge Handbook on Gender and Society.