In this article we explore virtual fencing: opportunities for livestock production and nature management, and the combination of both. 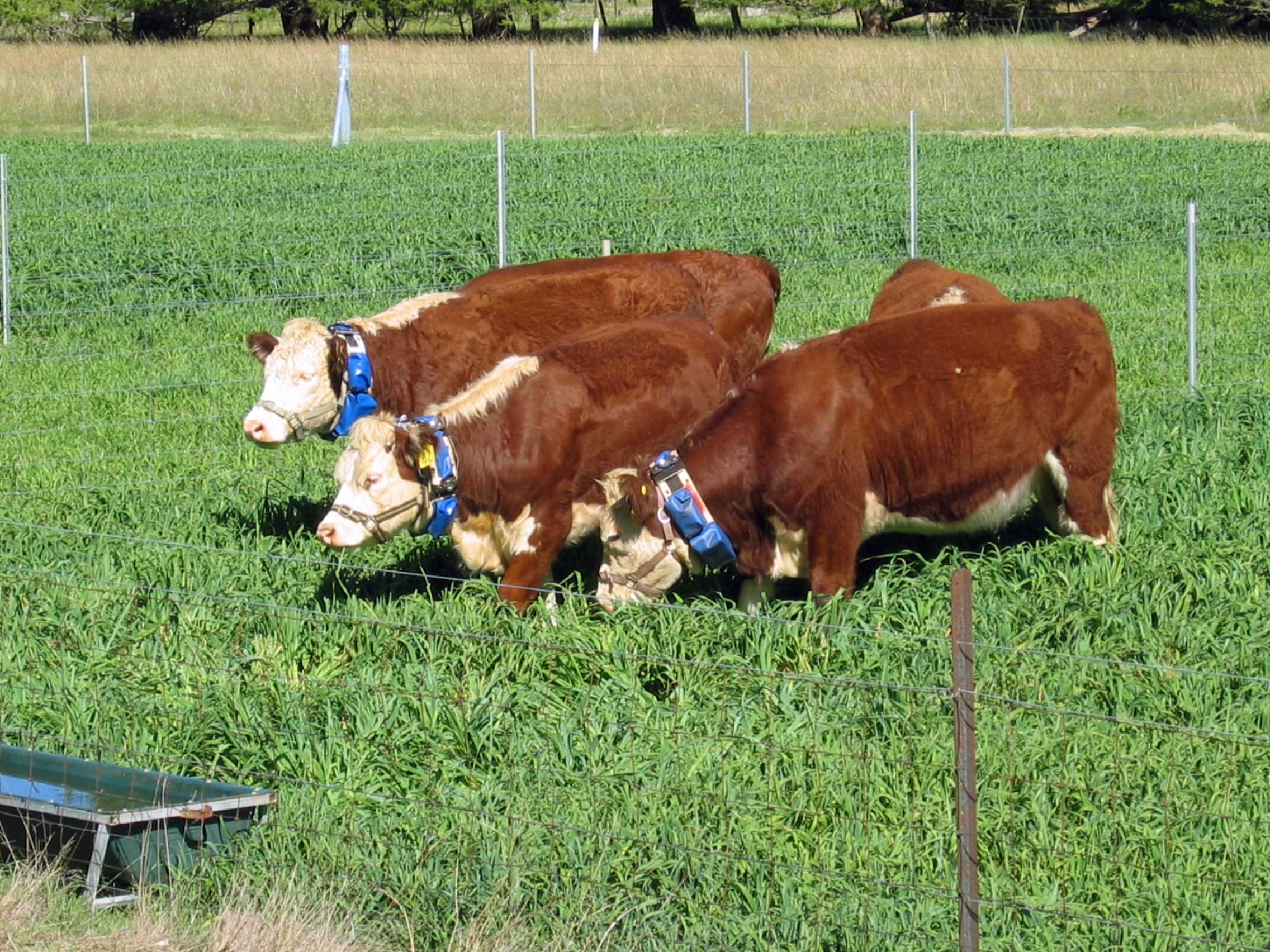 About one third of the habitable land are marginal pastures that are not suitable for crop production. They can only contribute to food production and significant carbon fixation if they are grazed efficiently.

Nevertheless, many of these marginal grazing lands are in remote or mountainous areas and have very irregular shapes. As the production level of these lands is relatively poor, large and many pastures are needed, and the herd has to move around from one field to another. As it is too labor intensive and expensive to fence all these marginal pastures, the farmer either has to herd the animals, or look for modern alternatives.

History of the virtual fencing technology

Virtual fences have been under development for many years. In 1973, a patent was granted in the United States for a system aimed at domestic animals to prevent them from moving into or out of a predetermined area without the use of visible fences. To this end, a signal emitting wire was placed to surround the area, and a receiver was mounted to the animal as a collar for producing a low-powered, high voltage electric pulse as the animal approached the wire. Although being successfully tested and still being used for dogs and cats, livestock such as goats were unable to adapt to the system. Furthermore, as it still relied on the installation of fixed wires, although them being typically underground, the system didn’t allow for flexible grazing schemes aimed at in livestock production. Throughout the nineties, a variation of virtual fencing systems was developed and a first device making use of GPS technology was patented in 1999. This new approach allowed the fences to not only be invisible, but also dynamic, thus without the need to install wires. Additionally, the new collar was emitting an audio signal preceding the electric pulse when an animal approached the virtual border. This allowed the animals to learn to associate the two signals and avoid the unpleasant electric pulses in the future by responding to the audio signals and returning to the position where they came from. 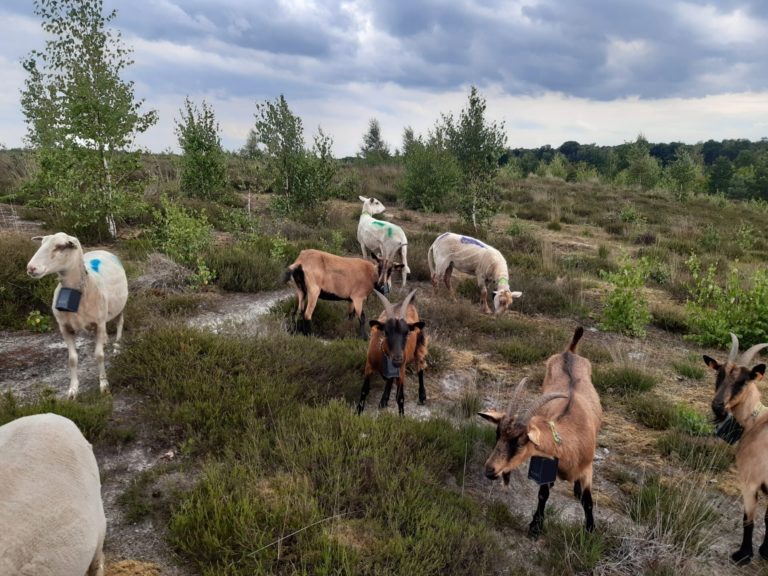 The technology was thoroughly tested and optimized over the past 20 years in terms of the position accuracy, (battery) lifetime, intensity of the electric pulse in relation to the animal species and age, the ability to support associative learning between audio signals and the electric pulse and minimize the effect on behavior and welfare of the animals wearing the collars. However, it is only since 2017 that the first virtual fencing system for livestock is commercially available. In Australia and New Zealand, Agersens commercialized the system for cattle under the brand name eShepherd®. Nofence, a Norwegian company, brought two types of collars on the European market, the first one works for both sheep and goats, and recently they introduced a collar for cattle. The US company Vence sells the technology for cattle on the American continent. All these different brands use more or less the same principle in which a collar with GPS is continuously tracking the position of the animal and checks this against the virtual borders set by the farmer and downloaded on the collar. If the animal approaches the virtual border, the collar will produce an audio signal of which the intensity and tone scale increases when the animal comes closer to the border. If the animal does not respond to the audio signal, which typically lasts for about 10 seconds, it will receive an electric pulse. The pulse has about 30 to 50 times less energy compared to a traditional electric fence, but still it is enough for the animals to be considered unpleasant. The cycle of the 10 second audio signal followed by the electric shock is repeated 2 more times if the animal doesn’t respond, the animal is indicated as ‘escaped’ and the audio signals and electric pulses are switched off until the system is reset if the animal returns to the allowed zone. The farmer gets push messages when an animal receives an electric pulse or when it is ‘escaped’ and he can get live information on the position of each individual animal and the number of audio warnings. The collars have built-in solar panels to charge the batteries during the day.

Effect on behavior and welfare 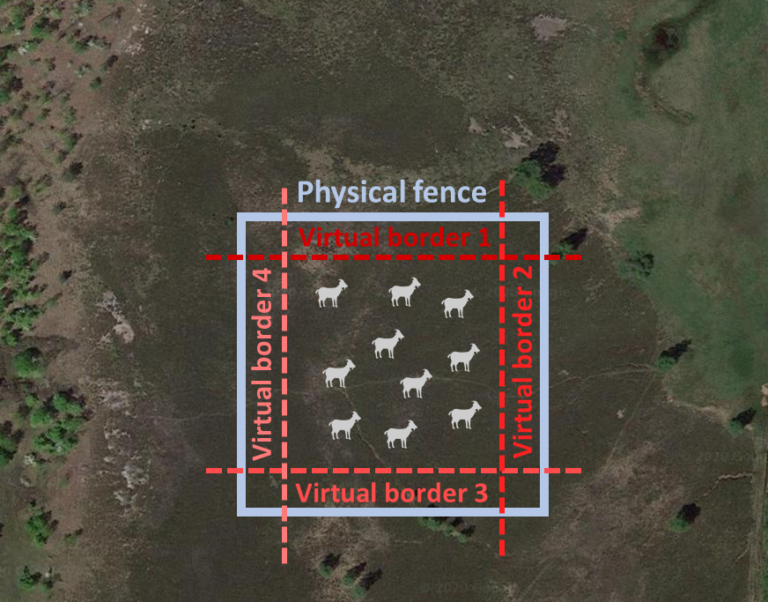 After the learning period, nearly no electric pulses will be generated anymore. The animals that approach a virtual border and receive an audio signal typically continue grazing while they turn around back to the area they come from. From experiments and observations, it is clear that there is a lot of variability within the herd on how the animals respond to the virtual fencing system and how this influences their grazing behavior. In sheep and goats as well as in cattle, it was observed that some animals really explore the borders, looking for the fresh and untouched pasture, not being stressed when they receive an audio signal and returning right before they would receive an electric pulse. Those animals can easily receive up to 100 audio signals per day. In contrary, some animals always stay on the safe side of the herd and have nearly no interactions with the virtual borders. Stress monitoring based on behavior observations, heart rate measurements and blood cortisol and β-endorphin illustrated that the stress response for cattle exposed to three unpredictable electric pulses by the system did not deviate from common treatments such as weighing the animals.

The use of a virtual fence for grazing animals could be beneficial for the farmer as it reduces the time spent to put up and maintain fences. The high flexibility of this system allows to change the fence daily to provide fresh pasture and support optimal animal health, welfare and production. Pastures that are normally too time consuming or not advantageous to be equipped with physical fences can still be managed efficiently with this system. Moreover, it can be used to manage cultural landscapes and nature reserves with grazers as the grazing (and trampling) intensity can be optimized in function of the envisaged nature management and conservation.

Figure 4 – The virtual fencing collar for cattle (by Nofence) mounted on a Black Baldy cow. The solar panels at the side of the collar are clearly visible 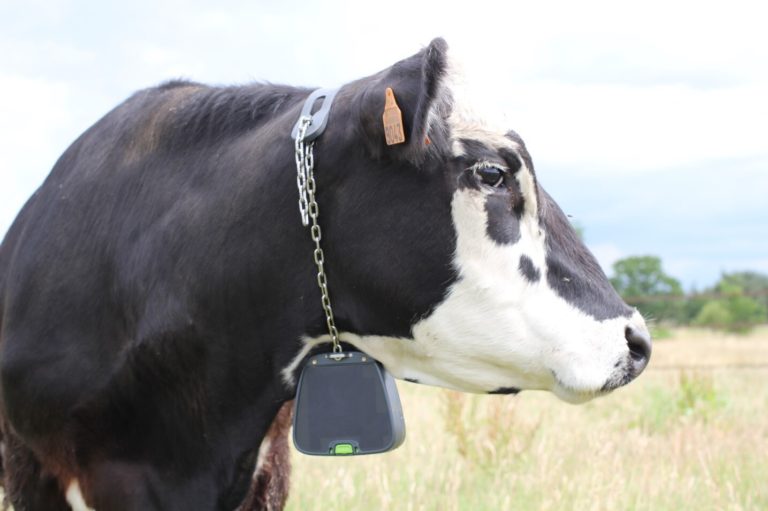 About 10 years ago, most dairy cows in Belgium and the Netherlands were kept inside year-round as it allowed for better control and monitoring of cow health and performance and thus maintain high production levels. Today, the food retail is pushing dairy farmers to let their cows graze, mainly to improve the welfare of the animals. To allow effective grazing on the limited pastures near the farm and combine it with high milk production, and also with an automatic milking systems at 10-15% of the Belgian and Dutch dairy farms, the farmer has to invest a lot of time and money in the installation of temporary fences and to collect the cows when they need to be milked. The virtual fencing system allows for intensive strip grazing with cattle and it should also allow for automatic collection of one or more cows if needed, although the latter still needs to be tested.

Figure 5- Print-screen of the application that runs on a smartphone or tablet.

The virtual area has a white border and a red transparent fill. The exclusions zones have a white border and no fill and the positions of the cows (n = 9) are indicated with the white circular symbols. The app can be used to draw or change the virtual fence, check the positions of the animals and evaluate the number of audio signals (n = 110) and electric pulses (n = 0).

Next to controlling the grazing behavior of the livestock, the system also collects a lot of interesting data that provides insight into their health and welfare, the grazing intensity and soil compaction. The system measures and forwards the position of each individual animal every 15 minutes or sooner, depending on the distance of the animal to the closest virtual border and the animal’s activity. These GPS data, together with the accelerometer data, allow to study the time-spend-budget (eating, resting, walking, …) of individual cows. It is expected that this will change when an animal has a health issue or altered welfare. Additionally, the social interactions between cows can be derived from the data and this typically changes in function of for instance estrus events. Accordingly, the system can also be used for monitoring purposes, which would allow to detect diseases and problems at an early stage. Therefore, this application can be very valuable in extensive grazing systems, where the herd is not always under the watchful eye of the farmer.

The red zones correspond to more time being spent at that position. The exclusion zones have dark violet borders without a fill. 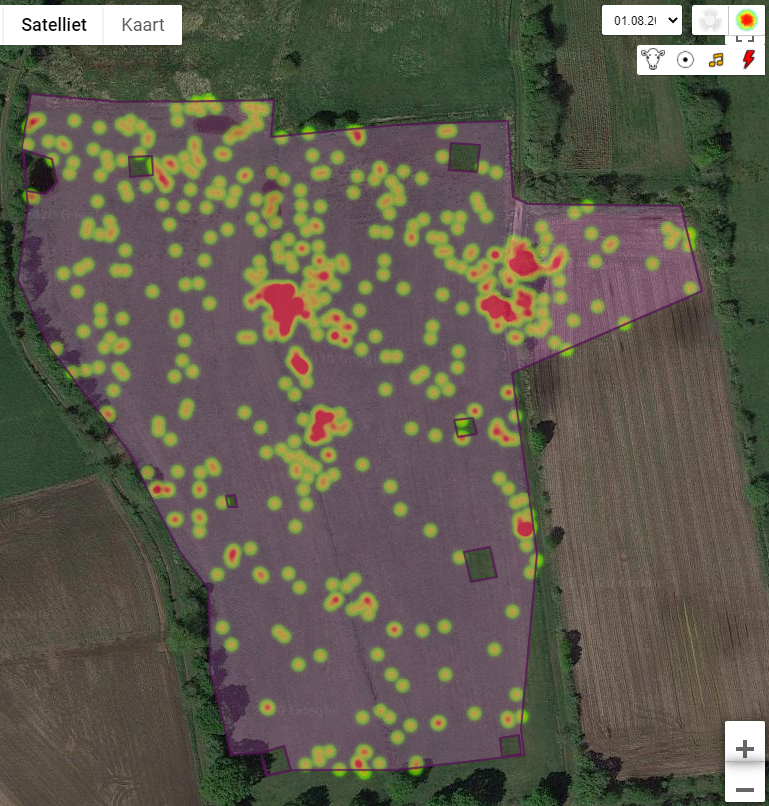