Controversial advertising as, ‘either by type of product or execution which can elicit reactions of embarrassment, distaste, disgust, offense, or outrage from a segment of people when presented’

Perhaps one of the most controversial ad campaigns in recent times was produced by Nike and featured former NFL player Colin Kaepernick. In protest of the treatment of African Americans in the United States, Kaepernick was the first player to refuse to stand for the playing of the national anthem before games and was met with considerable criticism. He soon found himself without a job on an NFL roster.

The ad campaign, featured on TV and billboards across the country, showed Kaepernick’s face with the words “Believe in something. Even if it means sacrificing everything.” The ad was designed in reference to Kaepernick’s actions, which proved to be very divisive. Those opposing Kaepernick’s actions believed him to be un-American and therefore also believed Nike to be the same.

Protests erupted after the ads came out and people were shown on social media burning their Nike apparel, using the hashtag #JustBurnIt. Many NFL fans also protested by not watching the NFL. Apparently, though, there were many who thought of Kaepernick as a modern-day hero and rewarded Nike with sales of $6 billion in online sales; an increase of 31 percent, which was attributed to the campaign (Abad-Santos, 2018).

The image below shows an example of the ad featuring Kaepernick that was displayed in San Francisco. 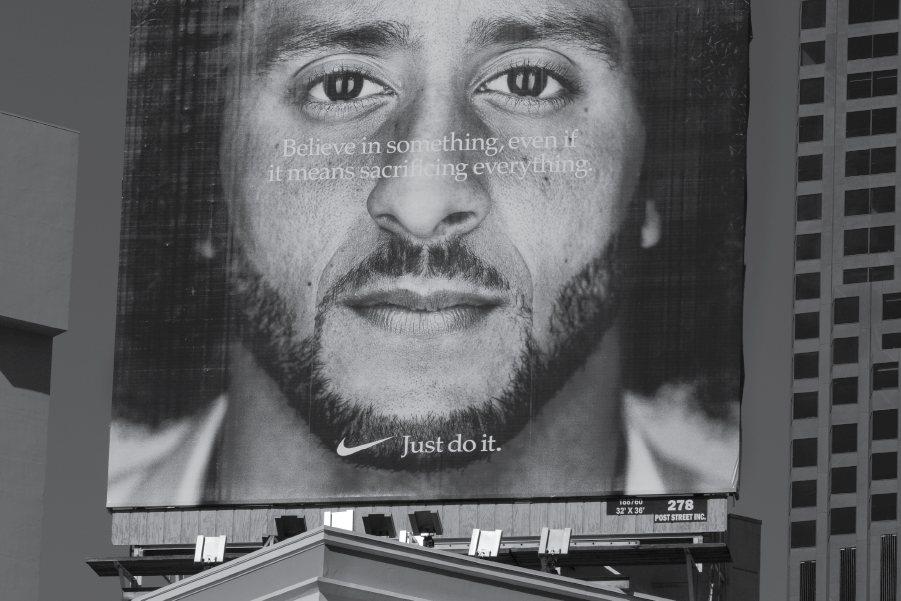 Unlike Nike, which designed their campaign around the controversial Kaepernick, most companies quickly drop celebrities endorsing their products if the celebrity commits an ethical violation. The adage “innocent until proven guilty” may work in a court of law, but advertisers cannot necessarily wait for legal resolutions regarding celebrity and spokesperson behavior. Even when no legal wrongdoing is found, companies typically cannot afford to align themselves with controversial people because of the possible negative association in the mind of the public—their customers.

Therefore, businesses generally distance themselves from troubled celebrities to protect their own reputations in the marketplace. One recent example of this involved bicyclist and Tour de France superstar Lance Armstrong, who was found guilty of performance-enhancing doping. Numerous companies, including Nike, quickly distanced themselves from Armstrong and released him from product endorsements.

Influencer marketing in advertising can deliver big benefits in terms of believability and value.