We describe the problem of cleaning a shared kitchen and use it to illustrate some characteristics of a Multi-Person Prisoner’s Dilemma. 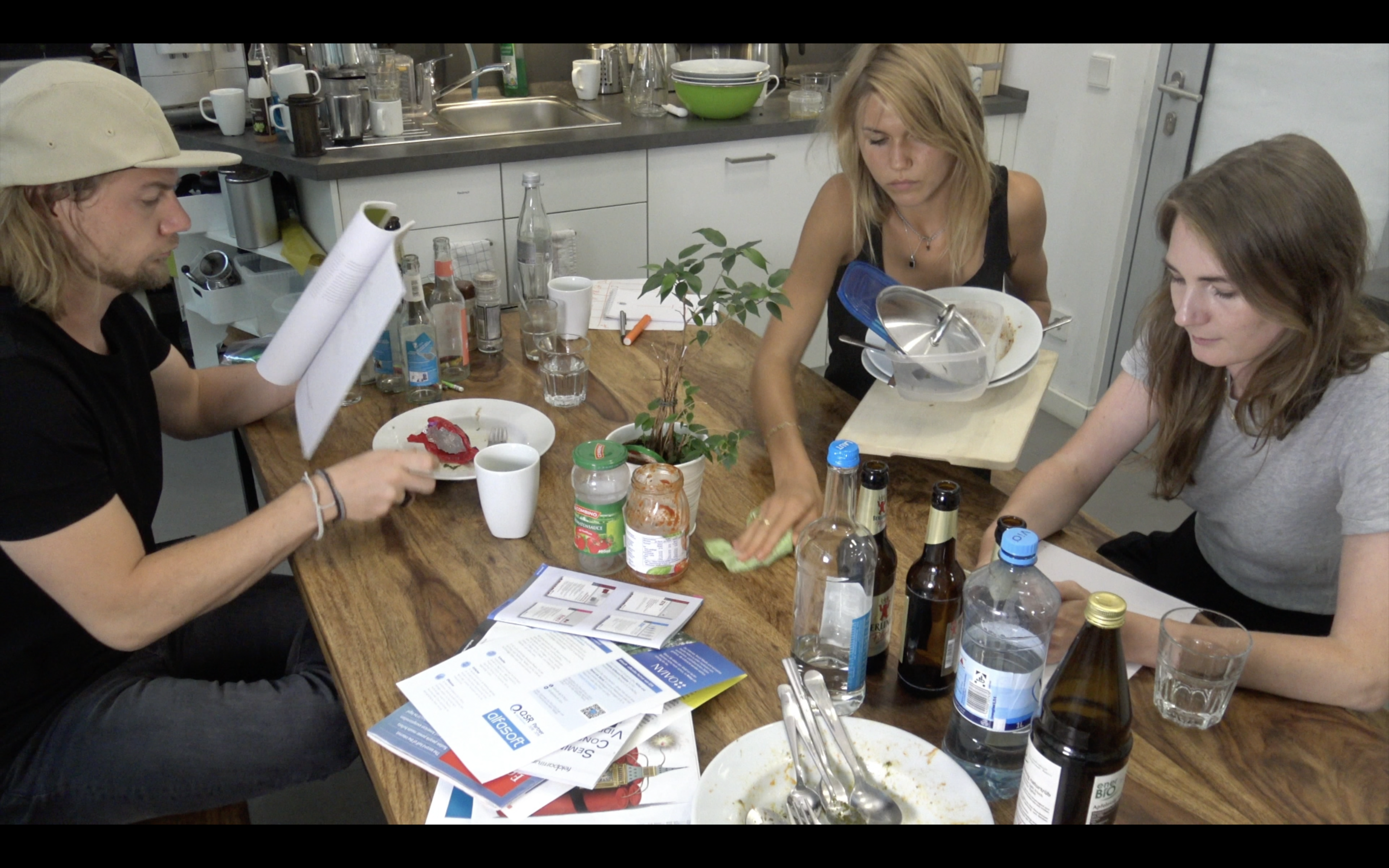 In this article we will describe the situation shown in the video in more detail and explore how it illustrates the conflict between individual and collective rationality.

As we saw in the video, there are three people who share the kitchen: Anna, Ben and Celeste. They all like the kitchen to be clean and they don’t like cleaning. Each person can contribute to the general cleanliness of the kitchen by 2 points:

While Anna, Ben and Celeste can enjoy how clean the kitchen is no matter if they contributed or not, the cost of cleaning, worth -3 points, is borne only by the person who decides to clean.

Now, let’s organise those situations in a table from Celeste’s point of view, taking other people’ actions as given. 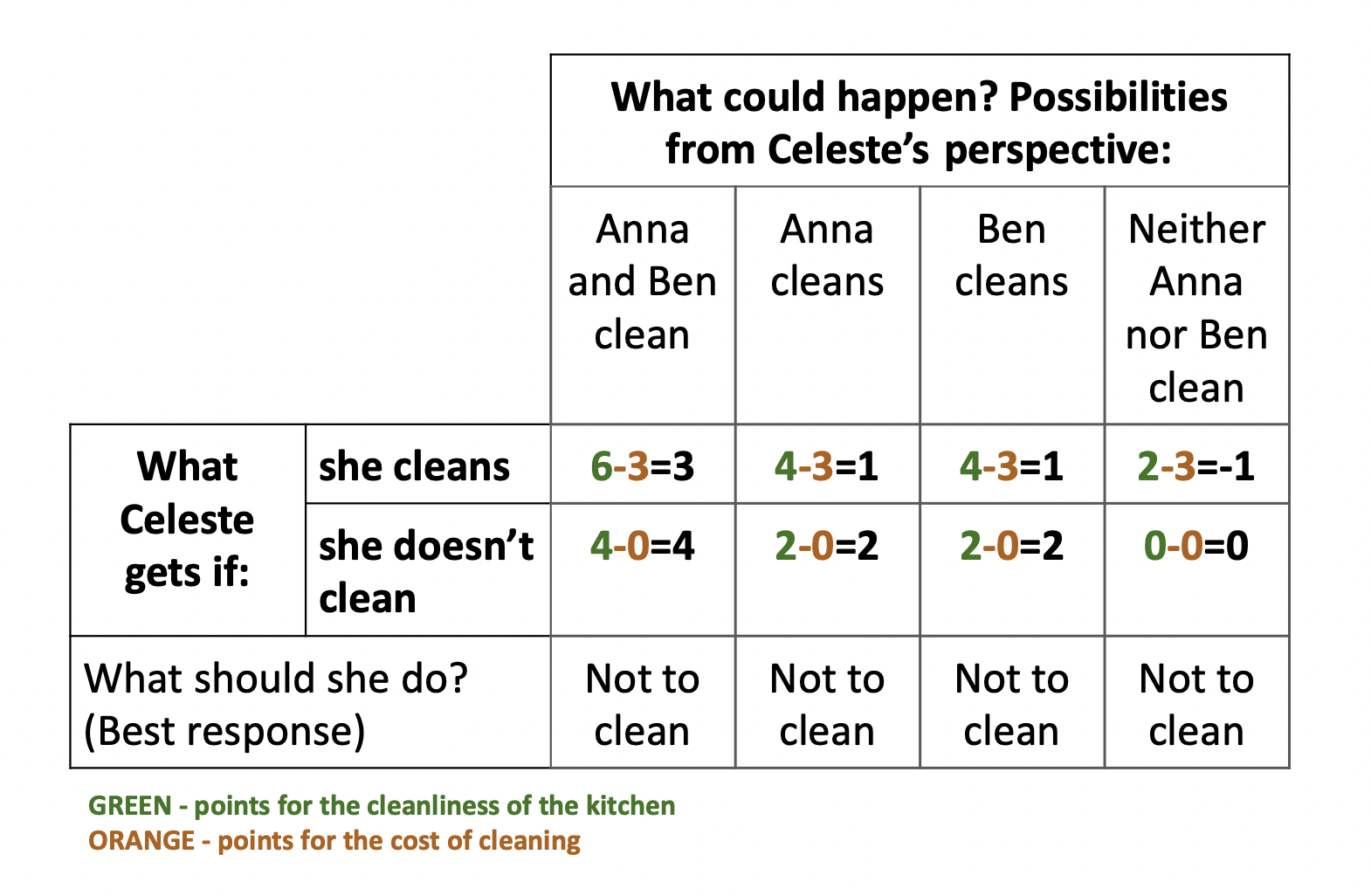 As we assume that everyone is the same, it does not matter who cleans, as long as we know how many other people are cleaning. Our table for Celeste can be reduced to three columns only: TWO OTHER persons cleaning, ONE OTHER person cleaning, NOBODY ELSE cleaning. 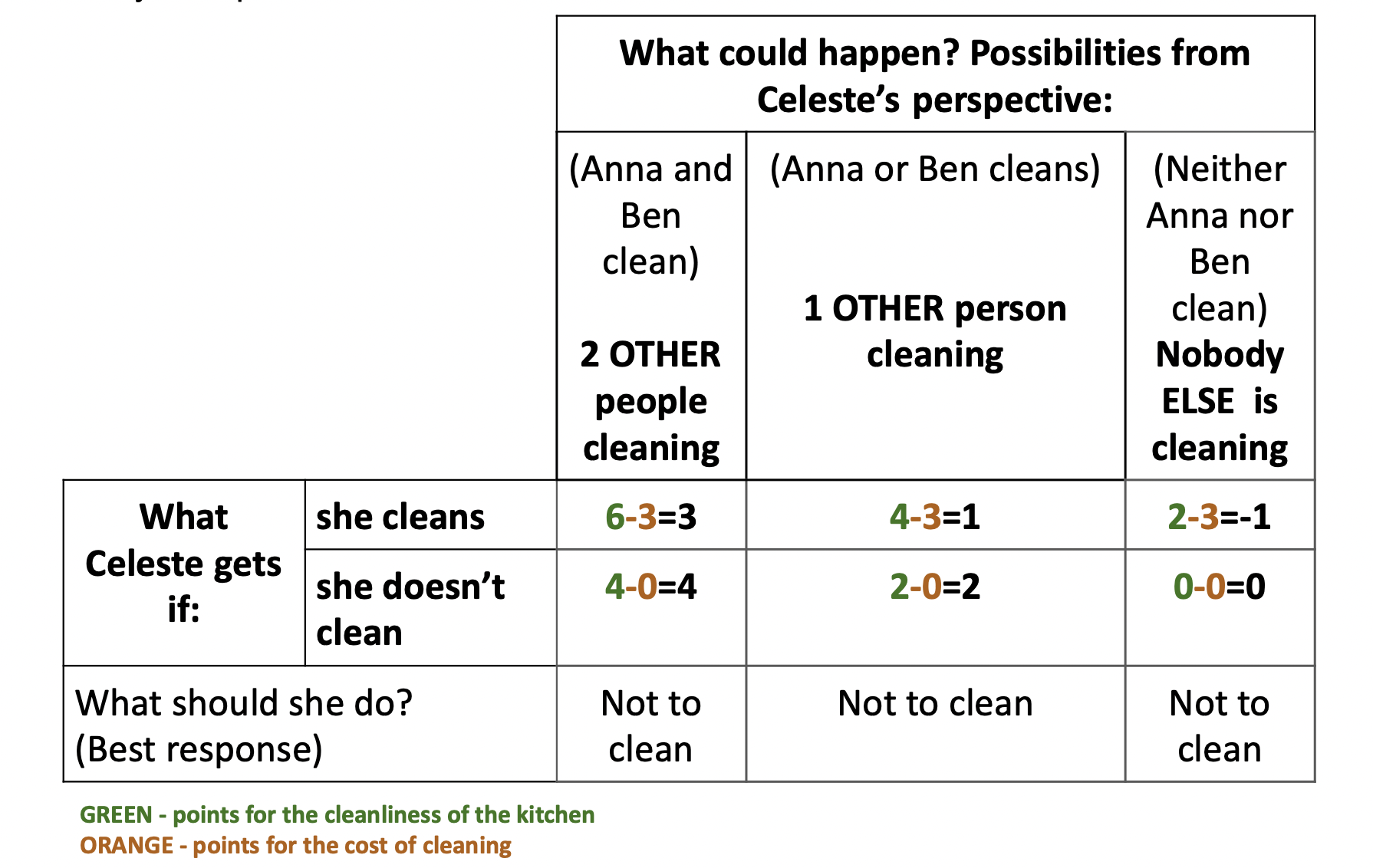 When we look at three columns representing three different possibilities of what the other students are doing, we can see that in each case Celeste’s best response is not to clean. In other words, no matter what Anna and Ben do, it’s always individually better for Celeste not to clean.

And as Anna and Ben are in the same situation (we could draw the same table for everyone), it seems that nobody would ever clean. This is the only equilibrium in this game as it is a combination of players’ best responses for each other’s strategies.

We’ve established that from the individual point of view it’s always best not to clean. If everybody follows this logic, everybody gets the same number of points – zero for dirty kitchen but no cleaning costs. At the same time, had they all cleaned, each of them would get a total number of: 3 people cleaning times 2 = 6, minus 3 points for cleaning = 3 points. This would have been better than zero, not only from a COLLECTIVE perspective, but also for each of the players.

As we already know from Week 1 the most probable result of this game, the one with no one cleaning and 0 points for everyone is not optimal according to the Pareto principle. We could find at least one other outcome of the game that gives at least the same payoff for everyone and better payoff for some players.

The inhabitants in our example are tempted to avoid housework and enjoy what the others have done. They want to “free ride” on others’ work. And if the others are avoiding housework, they don’t want to be the only one who cleans. So, adding more people to the situation didn’t help much. The same paradox we saw in the two person prisoner’s dilemma is still there. When each person tries to optimise, each person is worse off than if he/she had not optimised.