How to analyse multi-person games?

This article presents a way of analysing situations where there are many people who face the same choice between two contrasting options.

Before we explore the problems with shared resources further, we will see how we can analyse different situations where there are many people who face the same choice between two contrasting options (we can call them either-or, dichotomous or binary choices).

We will be using tables such as the one that described Celeste’s choice and also charts that illustrate a single person’s view of the game. Below, you can see a table that illustrates the kitchen story as described in the previous steps with a new flatmate, Diane, who joined Anna, Ben and Celeste and who has the same preferences as the other players. In the table we can see her payoffs that reflect how happy she feels depending on what the others are doing and which choice she makes. 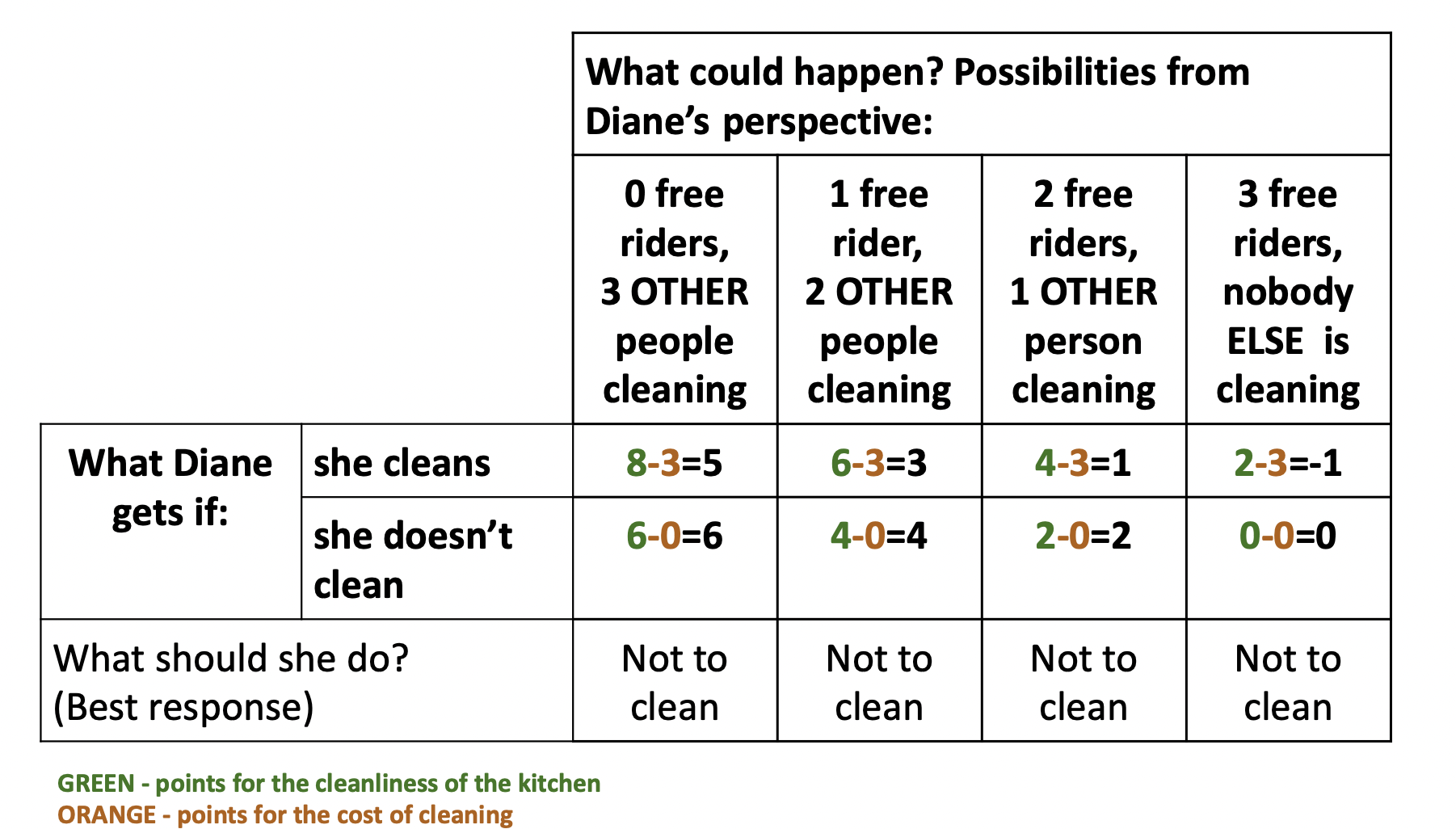 We can present Diane’s payoffs on a simple chart: 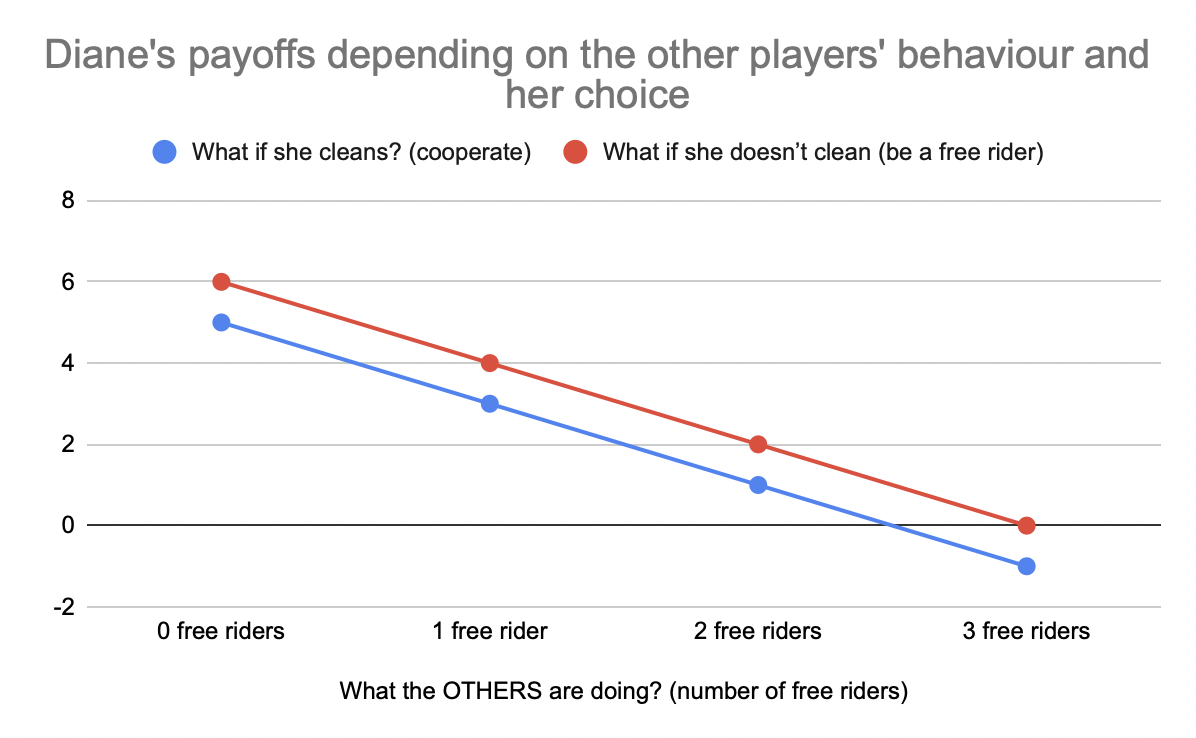 On the horizontal axis (a number of people who are not cleaning) depicts what the others are doing. On the vertical axis we have Diane’s payoffs – ranging from -1 to 6. In general, the higher we are on the chart, the happier Diane is. As Diane has a choice to make, her payoffs are represented by two lines: blue – for what she would get if she cleans and red – for what she would get if she doesn’t clean.

Let’s look at the chart from Diane’s perspective. How should she decide what to do? First, let’s investigate the shape of the lines – as it will tell us more about how other people’s choices affect us. Both lines here go down. It reflects what we already know about Multi-Person Prisoner’s Dilemmas and the free rider problem: the more people free ride, the less happy we are. This is true no matter if we clean or not.

In general if we look at the shape of the lines on such charts, we can see how other people’s choices affect our situation. As we’ll see in next steps, we can have different shapes – going down or going up, similar lines for red and blue or completely different ones. Here, the chart illustrates what we already know: in the Multi-Person Prisoner’s Dilemma it is always better when more people choose their non-preferred alternative (cleaning) and it is always worse for us when other people are free riding.

In order to decide what we should do, we have to compare our payoffs depending on what we can decide on – our own actions. So, we’ll need to compare the blue (cooperating) and the red line (free riding) – at a certain point representing the others’ actions that we cannot decide on. 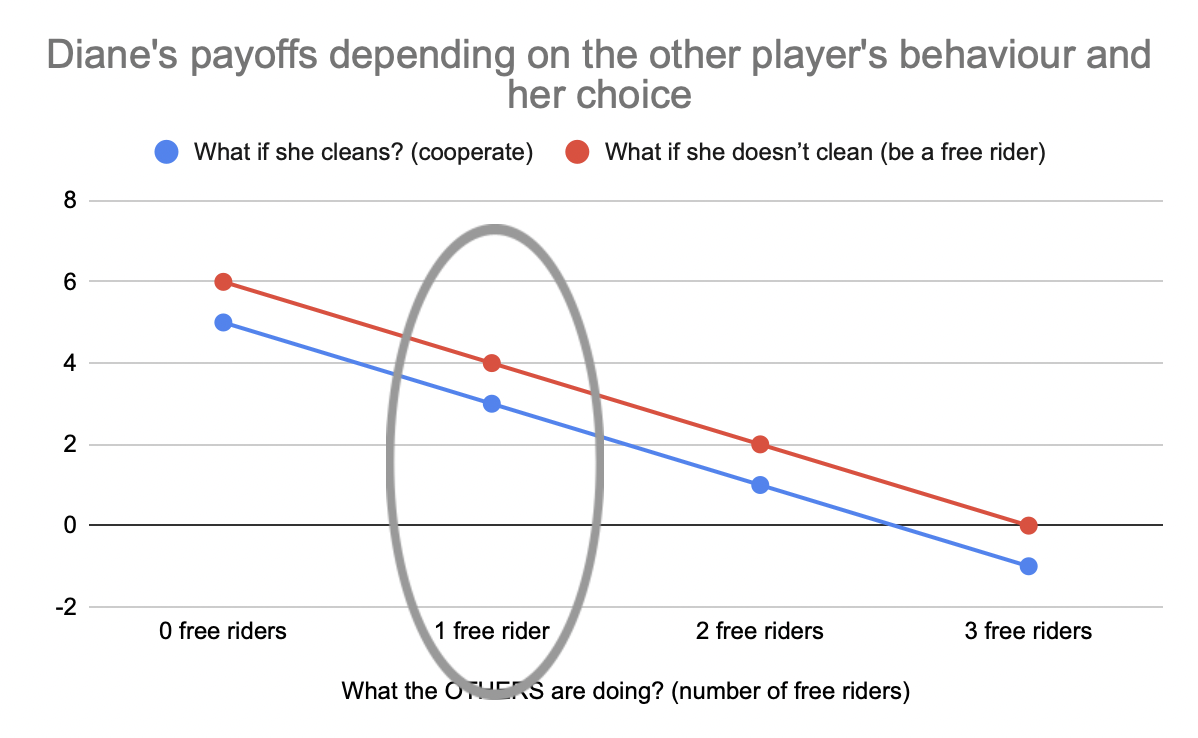 Let’s assume for a second that we’re expecting Ben and Celeste to clean. Diane can get 4 points by not cleaning and 3 points by cleaning, so Diane shouldn’t clean. If we pick a certain point on the horizontal axis and check the payoffs at that point, we can see what is our best response for a certain combination of other actors’ behaviour. And If we look at several points of the chart and investigate which line is above the other we can see how it can be more or less beneficial for us to pick one action or the other depending on how many people make such a choice. In this specific case, the chart reflects the fact that it’s always better not to clean – and that’s why the red line is always above the blue one.

As all the players have the same preferences we can rewrite the chart in a more general way: 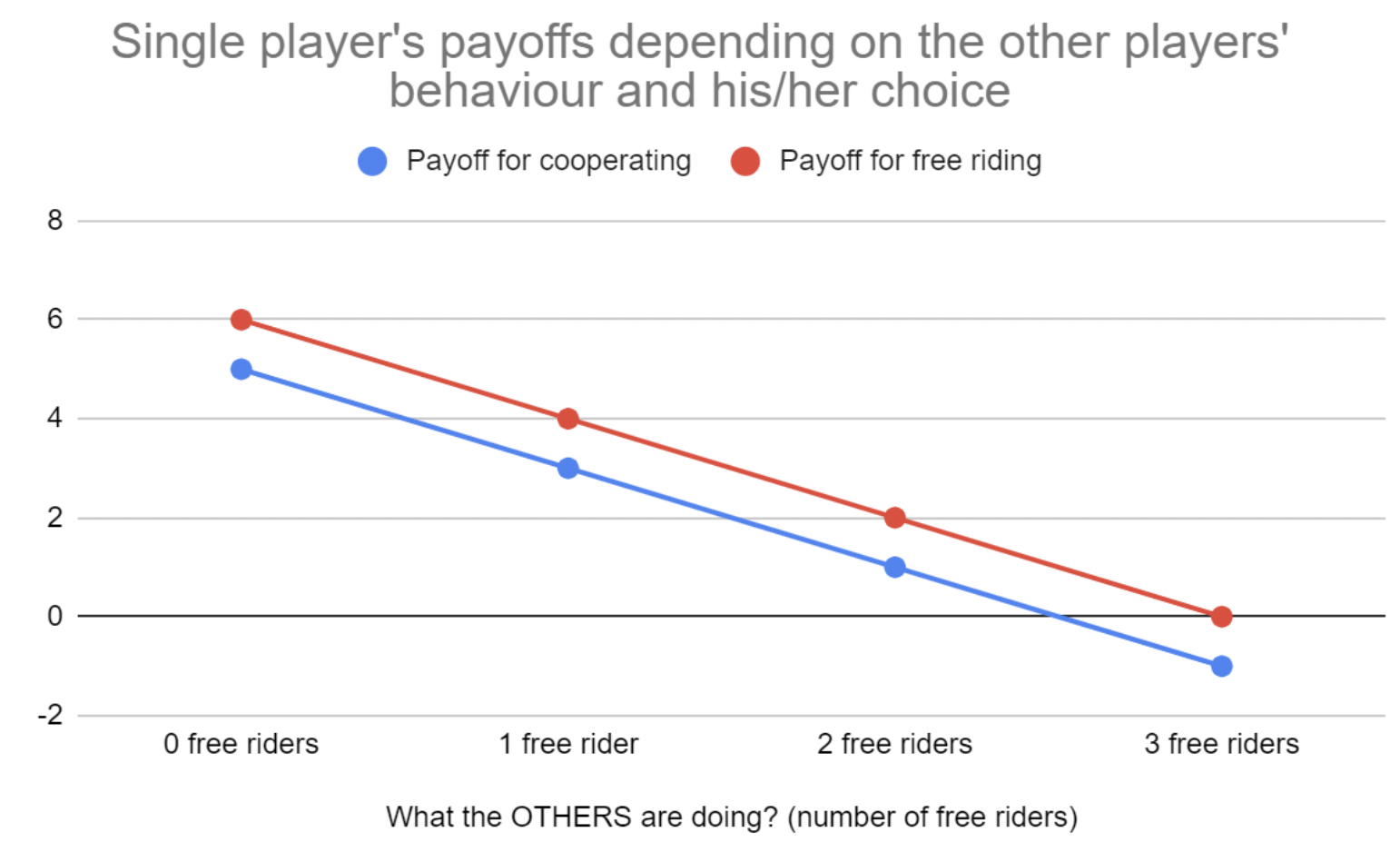 The game perceived by any player.

Now we have an example of a general Multi-Person Prisoner’s Dilemma. We can use it for the student kitchen example and for free riders in public transport. The more people avoid contributing to a common good (the more we move to the right) the lower the payoffs for everyone. And at the same time, in each possible scenario (0 free riders, 1 free rider, 2 free riders) it’s better to be a free rider than to cooperate. If everyone decides on the basis of their best interests we end up in a situation where all players free ride. And with all the people riding for free we’d have a very poor result (the lower right corner of the chart).

In the next steps we will see that the lines may go up and down and in different directions. And we will see how their shapes will reflect how other people’s choices affect our happiness.