Looking for equilibria in multi-person games

In this article we will explore further how charts that represent a single player’s view of the game can be used to identify the macro result. 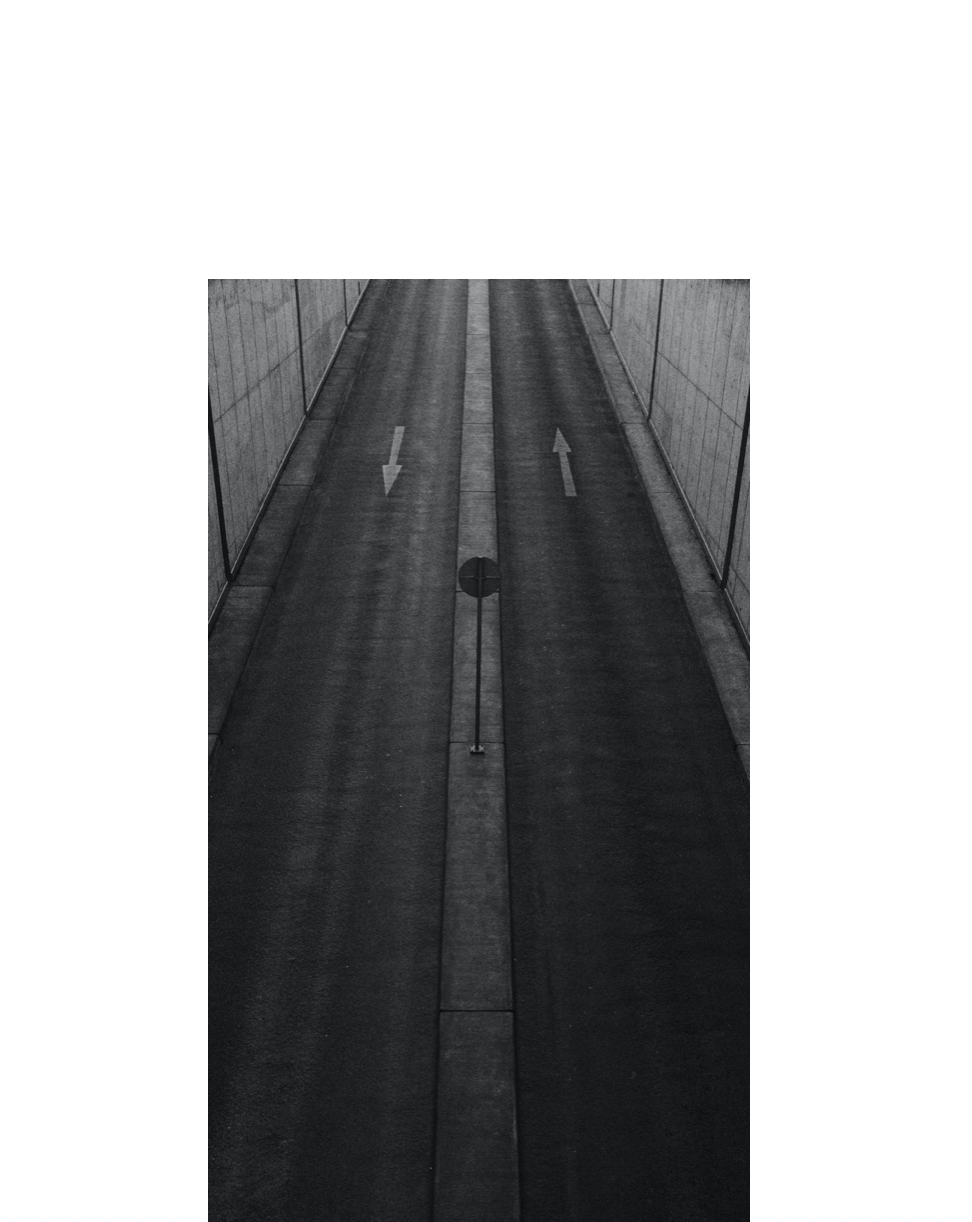 In this article we will explore further how multi-person situations with either-or choices can be represented on a chart and we will use the charts in order to find out how the game should end up. In short, we will be looking for equilibria.

As we saw in Week 1, equilibria are the most plausible outcomes of the game. The most important feature of an equilibrium is that if players are ‘in’ an equilibrium, none of the players is tempted to change his or her behaviour. In the case of the 2-person games from last week, it meant that there were no arrows ‘going out’ of an equilibrium in a game matrix. We will be able to see that with multi-person game charts, the situation will be similar. 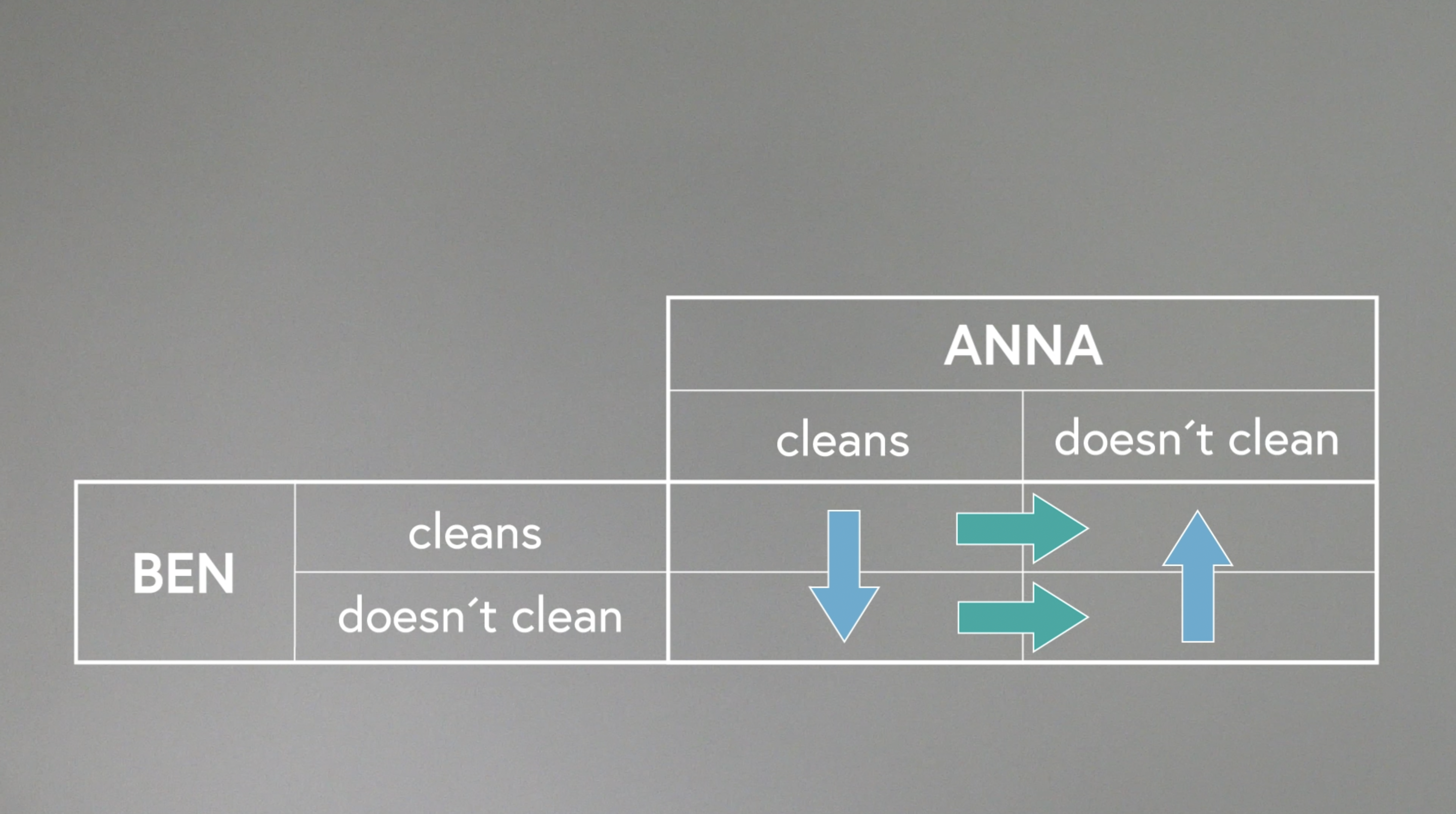 When Ben cleans and Anna does not, there are no arrows going out. This is an equilibrium.

It was already mentioned that although the chart is drawn from a single person’s perspective, it is illustrative for the whole game as all the players perceive the situation the same way. We will look for equilibria by examining the best responses of the players to the other players’ behaviour.

Let’s start with our first example with free riders (Chart 1). 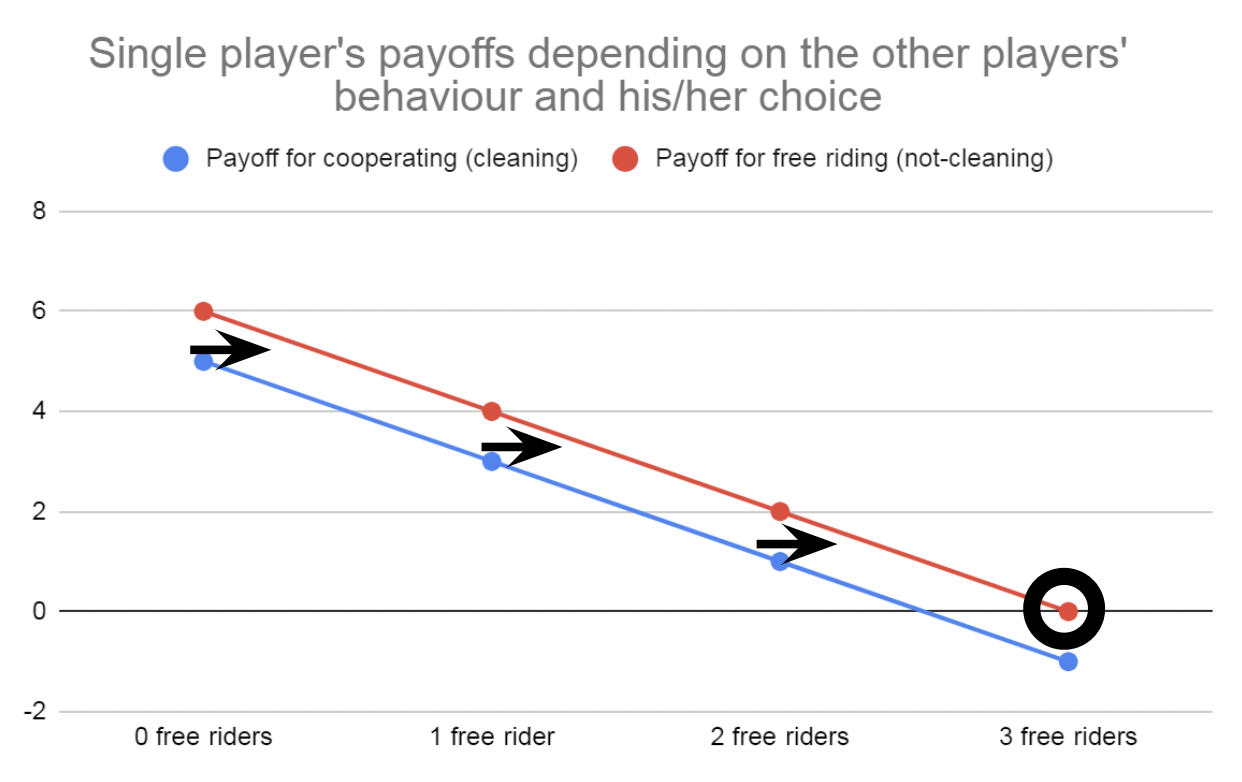 We will draw arrows on the chart that indicate if more or less people would choose RED or BLUE at a certain point of the game.

Furthermore, we can apply the same reasoning for the point where there are 2 free riders. Let’s assume that I’m expecting 2 people to be free riders. I’ll join them in free riding as it’s more profitable for me than to cooperate (clean), right? So, if I expect 2 free riders, there will actually be more free riders than that, so we should draw another arrow pointing right.

Similarly to the games described in the previous week, we will look for equilibria at such points on the chart where no arrows point away from.

In this game, no matter what we are expecting from the other players, it’s better to free ride (RED line above the BLUE one). So, if we start looking at the chart as a representation of each player, we can expect that more and more players will come to the conclusion that it’s better to free ride. Therefore, more people will choose to free ride and we shift to the right side of the chart with more and more free riders present. Eventually we end up in a situation where everyone free rides. This is the only equilibrium in the game. Everyone chooses the RED option and gets 0 points.

This is an example of a game with a strategy that is always better no matter what the other people are doing and one equilibrium. 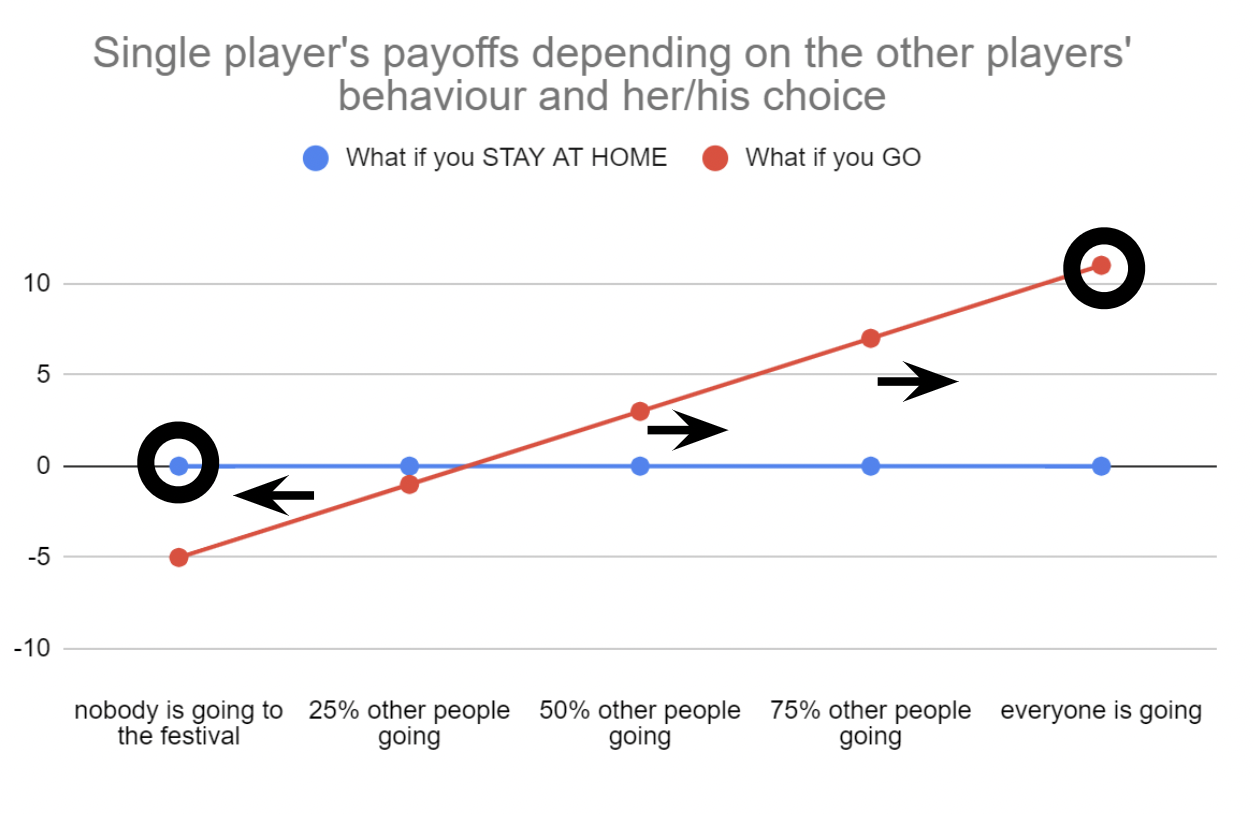 Again, we can pick some points on the chart and think what would happen if we expected a certain fraction of citizens to go to the festival. And then we can draw arrows that point to a direction in which way the process would go:

It might be a bit abstract that we’re assuming some starting point that would never actually happen, but this is helpful in looking for equilibria. It’s a bit like imagining a certain starting point and thinking about the direction the process would unfold from this starting point.

In this game we have two equilibria, one with no-one going to the festival (and they all get 0 points) and the other, where all the people go and enjoy a huge social event (and everyone getting 10 points). This is in fact a coordination problem. If many people are going, I’d like to go too. And if the majority is staying at home, I’d rather behave the same way. In this case, and in some social processes, it all depends on what people expect! It might sound crazy, but this is the case with some social processes. If people expect the others to attend the festival, they’ll go and make it crowded (as expected) and if they think nobody will show up, they won’t go.

How do you think you could apply this kind of reasoning to a marketing campaign – what suggestion about attendance would you make in order to encourage people to go to the festival?