When to use charts for multi-person situations?

In this step we will examine what types of situations can be analysed with the help of multi-player game charts. 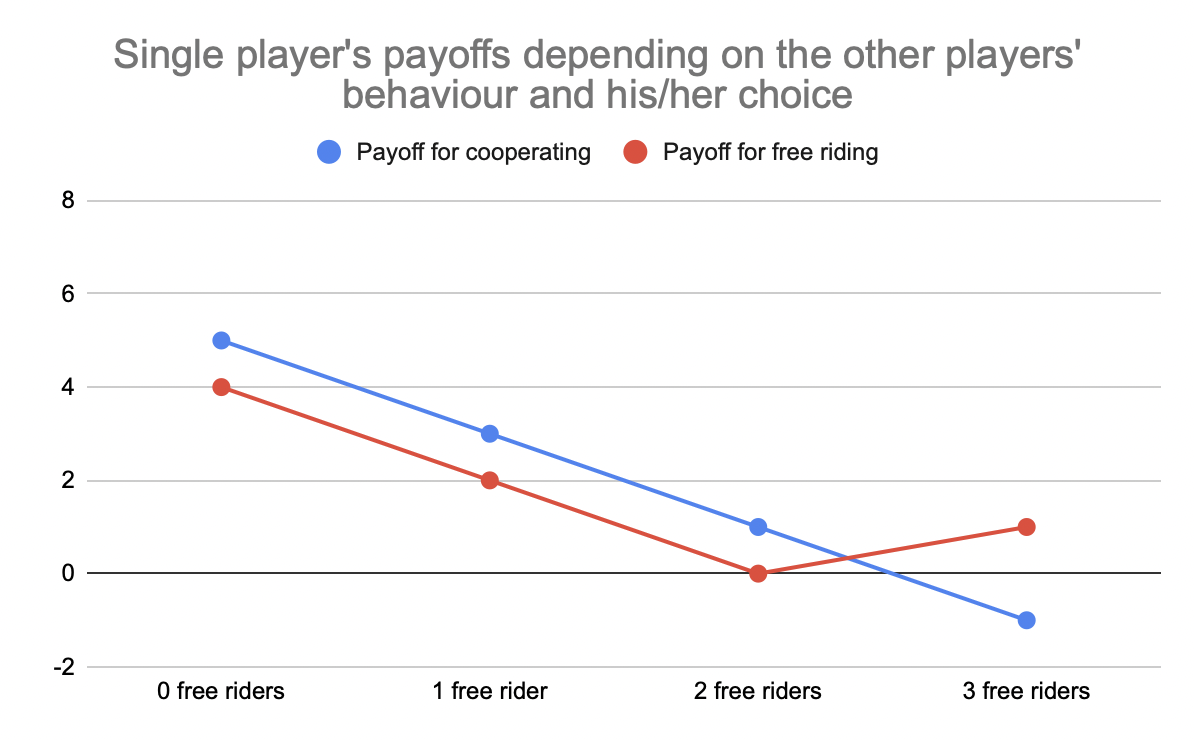 In this step we will examine what types of situations can be analysed with the help of multi-player game charts like the ones depicted in the previous steps.

The concept of such charts was designed by a Nobel prize laureate Thomas C.Schelling and those charts are called Schelling diagrams for multi-person games. As you could experience in the previous steps they can be used in order to investigate the situation people are facing and also to think about possible modifications of a certain situation that could change the result of the game.

We can model a social situation by using such a chart when it involves a lot of people who face a choice between two options, who perceive the situation the same way and their happiness is affected by other people’s choices. We’ll examine those four characteristics in more detail in this text.

There are four main characteristics of a situation that make it suitable for analysing it with the use of a Schelling diagram (a chart like the ones present in the previous steps):

This means that there are many people involved in this situation.

There are two main behaviours to choose from (binary, either-or). In such situations there are many people who face the same choice between two contrasting strategies (either-or). This is the case of our house mates,who could clean or not clean, or of passengers who can either pay for the ticket or free ride, of car-owners who can use leaded or un-leaded gasoline, people who decide whether to go to a party or not, whether to use traditional phone or a smartphone, to segregate trash or not, etcetera. In many real-life situations, even if in reality there is some gray area, we can simplify the choices in such a way.

Each person’s payoffs (as the situation is symmetrical we can choose anyone in order to check that) have to depend at least at some point on the other people’s choices. In other words, it only makes sense to analyse social situations with the help of such charts if there is some interdependence between the players. So, other people’s choices affect our choices. We can either benefit or lose something depending on their choices and we can prefer different options over the others depending on how many people made one choice or the other.

Why is it worth it to analyse multi-person situations with such charts? Even though the construction of Schelling diagrams is not an obvious one, it can be a useful tool for analysing different social problems. Thinking about the mechanism behind a certain social situation by trying to come up with a chart that depicts it might provide insights into the reasons that lead to a certain problem.

We can also try to think about certain modifications of the game that could change the final result. There are different modifications of the game that we can consider. For example, we can think of a way of making one option more attractive than the other one. Rewarding people for picking one road over another, or rewarding those who clean up the kitchen are examples of such solutions. We can also investigate what would happen if one option became more or less costly. We saw that in the case of a dirty kitchen buying a dishwasher helped students resolve their problem. Similarly, in case of bigger social issues, like problems with segregating trash, making it more comfortable or easier for people to behave in a way that is socially desirable can also help us switch from a non- optimal outcome to a better one.

To sum up, drawing a chart like the ones analysed this week can help better understand certain social problems and come up with possible solutions.