In this article, Dr Helen Farr discusses early seafaring around the themes of floats, rafts, boats and propulsion. 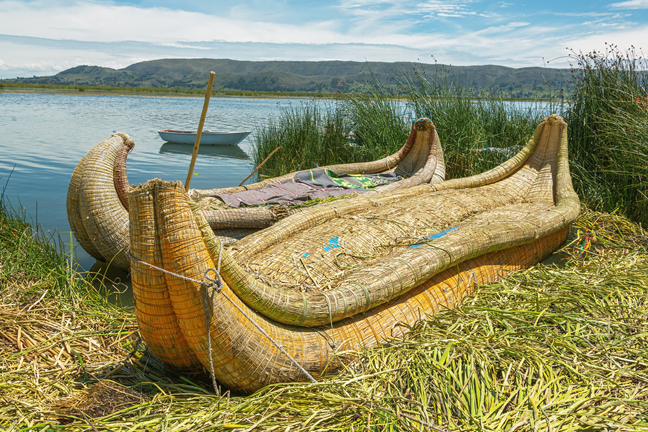 Boats and ships have played an important role throughout history from the local scale to that of the global: from the daily activities of fishing, water transport, travel and local trade, to global colonisation and more recent migrations and diaspora, global commerce, empire building, defence and warfare. As such, watercraft were often the most sophisticated expression of technology within a society. We only need to consider the innovative technology, naval architecture and engineering within nuclear submarines, container ships or cruise liners today to see this is still the case. When we consider the prehistoric archaeological record, comprised mainly of chipped stone tool and bone technology, even simple watercraft technology appears complex, revealing different tool use, sequences of process, measurement and an understanding of the environment. Add to this the information that we can glean from the social skills of seafaring and cognitive ability implied by navigation and pilotage, and it becomes clear why evidence for early seafaring is an important facet of the archaeological record.The earliest forms of watercraft were very simple, constructed of locally available, organic materials such as wood or bark, skins and hide (animal skin) or reeds. These materials are rarely preserved in the archaeological record except in very wet or very dry conditions. Even in these circumstances it would be very difficult to identify simple watercraft through survey alone. In most contexts it is necessary to study the vessel closely in order to identify evidence of human modification and tool marks.Simple watercraft fall into the following categories:Floats:The simplest form of watercraft. Whether, a simple log or an inflated hide, these need very little modification and would be very hard to identify in the archaeological record. Inflated skin floats were mainly used for riverine transport, historical records record their use in Northern India, however inflated hides used as floats in raft production can still be seen today on the Yellow River in China.Rafts:

View Course
Another form of simple watercraft. They differ from boats because they gain their buoyancy from the materials used, as opposed to boats, whose shape displaces water and creates buoyancy. As such boats must be fairly watertight, whilst rafts can allow a through flow of water. This through flow of water may limit the use of rafts in colder climates. However, even if a rather wet mode of transport, rafts can be extremely seaworthy vessels and are particularly good in surf, for example on the Peruvian coast where balsa and reed rafts are still used today.Rafts can be extremely diverse and made from a variety of materials including balsa wood, reeds, bamboo or even pots. They can be technologically complex and ornate or they can be an expedient technology with low investment and a short life span. They also vary greatly in size, from the single bundle raft, to those constructed of various bundles of reeds or logs bound together. Rafts measuring 80 x 25 ft. (ca. 24 x 8 m) were used to transport timber up and down the South American coast until the 18th Century and reed rafts on Lake Chad, Africa, were known to carry 40 tonnes of cargo.Reed bundle rafts can be shaped to form boats, as can be seen today on Lake Titicaca, Bolivia and Peru. An Egyptian tomb relief from the 3rd millennium BC depicts this construction sequence showing the wetting of the reeds in order to bend the bundles into shape. These were then held with a strop to curve the bow. Other archaeological examples include the Jemdet Nasr reed bundle craft depicted on a Mesopotamian cylinder seal dating to c. 3200 BC. Ancient written records include Strabo’s account of their use in Mesopotamia and Pliny’s descriptions of reed rafts with reed sails on the Nile. Pliny quotes Eratosthenes that reed craft were used for coastal voyages from the River Ganges to Ceylon in the late 1st millennium BC, a crossing that took 20 days at a speed of 3 knots. Heyerdahl proved the seagoing capability of reed craft with his completion of a transoceanic voyage on RA II.Boats:Prehistoric boats can be found in a variety of forms and materials including reeds, hides and skins, bark or logs, pots or woven baskets (coracles). Pot boats are rare but there are records of their use on the Nile and in Bengal. Metellus in 252 BC records the use of pot rafts to transport elephants between Sicily and Italy!The oldest boats preserved in the archaeological record are logboats. The logboat found at Pesse in the Netherlands dates to the Mesolithic c. 6315BC. At its most simple a logboat is a hollowed out trunk. This has to be hewn, shaped and thinned and can be heated in order to achieve the correct shape. A logboat can be extended by adding an additional plank to higher the freeboard of the vessel, giving additional stability and carrying capacity; these craft are often known as Pirogues. It is thought that the onset of planking is associated with the development of metallurgy and not seen until the Bronze Age. The first archaeological find of a plank built vessel is the Cheops ship in Egypt.Heracles in a pot boat. From an Athenian vase c.480 BCPropulsion:The earliest evidence for the sail, currently comes from As Sabiyah in the Gulf and dates to the Ubaid 2/43 period 5500- 5000BC. These finds of painted ceramic discs and clay boat models are argued to depict a mast and mast foot, thus indicating that sail technology existed in the Neolithic. Until these finds, it was thought that the earliest evidence for sail technology dated to the Gerzean period c. 3100 BC on the River Nile. It was argued that sailing developed because of the particular environment and prevailing winds of the Nile where simple sails could be used to push vessels back upstream against the current.Before the advent of the sail, vessels are likely to have been paddled, rowed or punted.The majority of evidence we have for early seafaring comes from indirect evidence rather than preserved boats themselves. However finds are regularly made, for instance the Bronze Age log boats at Must Farm in the Cambridgeshire fens.We’d love to hear your thoughts.Helen Farr
© University of Southampton, 2017

Hi there! We hope you're enjoying our article: Early boats
This article is part of our course: Shipwrecks and Submerged Worlds: Maritime Archaeology