Exploring different ways that sound in film can enhance and support language learning.

Please read the text first before playing the video.

Often wrongly called a ‘visual medium’, film in fact has three distinct modes of operation: the image, sound, and time, or ‘duration’. Together they constitute a rich audio-visual ‘language’ that all films draw upon. It’s true that the image tends to dominate our impression of the medium, especially when we talk about it, but without the dimensions of sound and time, film would just be a photograph – or many hundreds of photographs strung together.

The rest of Week 1 focuses exclusively on film sound, and on the many ways it can scaffold learners’ engagement with new language, or familiar language in a new context.

We’ll start the step with an overview of the ways of thinking about film sound, and a resource for remembering them. Separating sound from image is one of the Basic Teaching Techniques we looked at in Step 1.5, and it uses a ‘Tell Me’ grid as well. Paying close attention to sound offers learners the opportunity to use their imaginations, and then to put what they imagine into language – either spoken or written.

The ‘Tell Me’ grid attached to this step outlines the four most common aspects of film sound: music, dialogue, sound effects, and silence. It might sound odd to include ‘silence’ as a kind of sound – but without it, all the other sounds would become undifferentiated noise. Silence in effect punctuates and sharpens the sounds around it. ‘Tell Me’ grids are used to support learners with analysing select aspects of a film and they will be used throughout this course.

Play the short sequence of sound above from one of the short films on the course and make a note of which kinds of sound you can hear, and how they are ‘punctuated’ by silence.

You might want to run this type of activity in your classroom using the Tell Me Grid on sound in the download section. 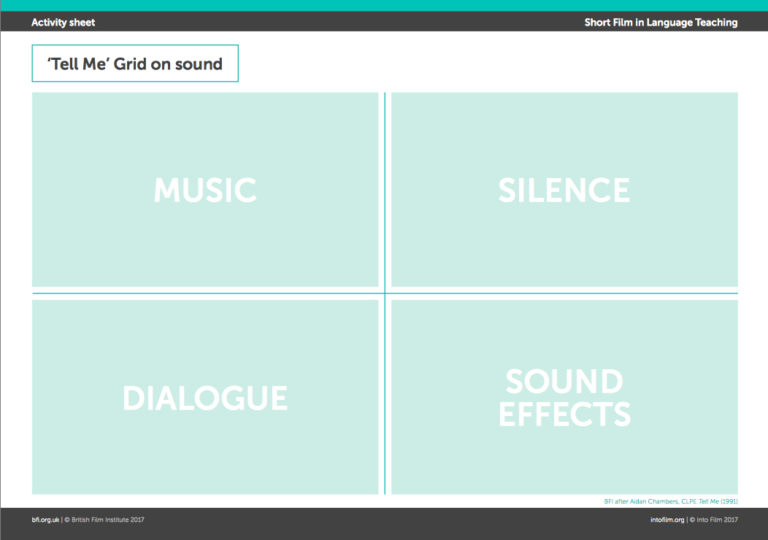 It’s quite straightforward to translate music, sound effects, dialogue, and silence into another language – students can annotate the grid, or write or respond to it, using language choices that reflect their level of expertise. In addition to the question above, what language would you expect to elicit from your learners? How would you scaffold or support the listening activity for them? Would you need an element of pre-teaching or preparation in order for them to engage with it?

There are many ways of separating sound from images. A long time ago, when teachers played back video on TVs, they would have had to hide the screen with a jacket to do this activity! Now there are many ways of separating sound from pictures – you can turn off ‘mirroring’ on the displays panel of your computer; ‘mute screen’ on your projector, or minimise the video file so the picture isn’t visible. You can even physically separate the sound track using editing software (see Step 1.16).

In the next step we’ll let you see the images that go with the sounds. The technique is widely used by a range of teachers and it features in the Basic Teaching Techniques in Step 1.5.