Exploring the notion of the 'flashback' and relating it to recounting, we practise past tense sentences by describing plot points.
View transcript
16.5
What are you doing?
23.6
Do you want to play a game?
27.8
What game? See those lines down there?
35.4
Stand there.
40.4
Come on, you’ll see how you like it.
50.2
You don’t play? Of course I do. But from here. Now you have to walk on the line, following it. Well, how easy. You can’t step out of it.
80.9
Done. There are more lines. Do I have to jump? If you don’t jump, you won’t advance. Okay, but if I jump, I might not make it and if I don’t step on the line, I lose, don’t I? What do you think?

The written or spoken equivalent of the film flashback is the ‘recount’. This is where we recall a set of events, sometimes in a sequence.

Diaries are the most common form of recount in writing, but the form is used in lots of genres such as witness statements, radio documentaries, and news reports, each with their own conventions. From a language teaching point of view, there are different tenses that we use in recounting: past/perfect; imperfect; past historic (in some languages).

For this step, we’re going to show some of the film from which we chose still images in Week 2, El Juego. The whole film is around 5 minutes long, but we’re only playing the opening 2 minutes.

Would you expect pupils to complete this type of exercise in the target language? How would you plan the range of language you would expect pupils to use for this activity? How might you model language for pupils to retell the story orally or in a written form?

Use the downloadable resource below called ‘Axis of Emotion’, to ask your learners to plot the four or five narrative points like the ones that you created above. Ask them to label these points in the past tense, and in another language if you like. You can use the film clip in this step or one of your choice. This is a great way to engage visual learners.

Below is an example of an Axis of Emotion to explain. 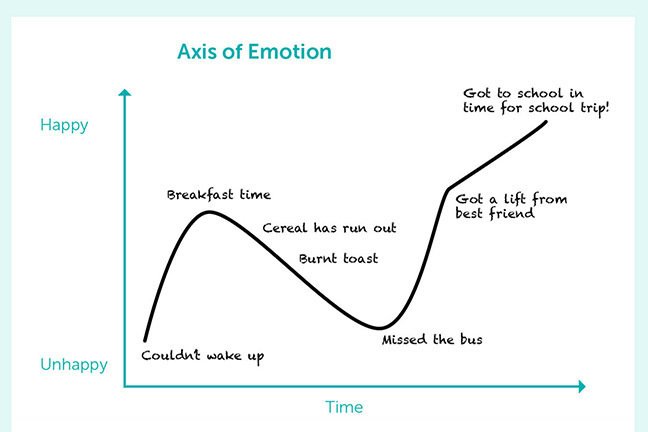