Skip main navigation
Home / History / Superpowers of the Ancient World: the Near East / War and Peace

With the Battle of Megiddo won, the Egyptians were surely on the cusp of taking Syro-Palestine. The Mitannians, however, are not to be underestimated. 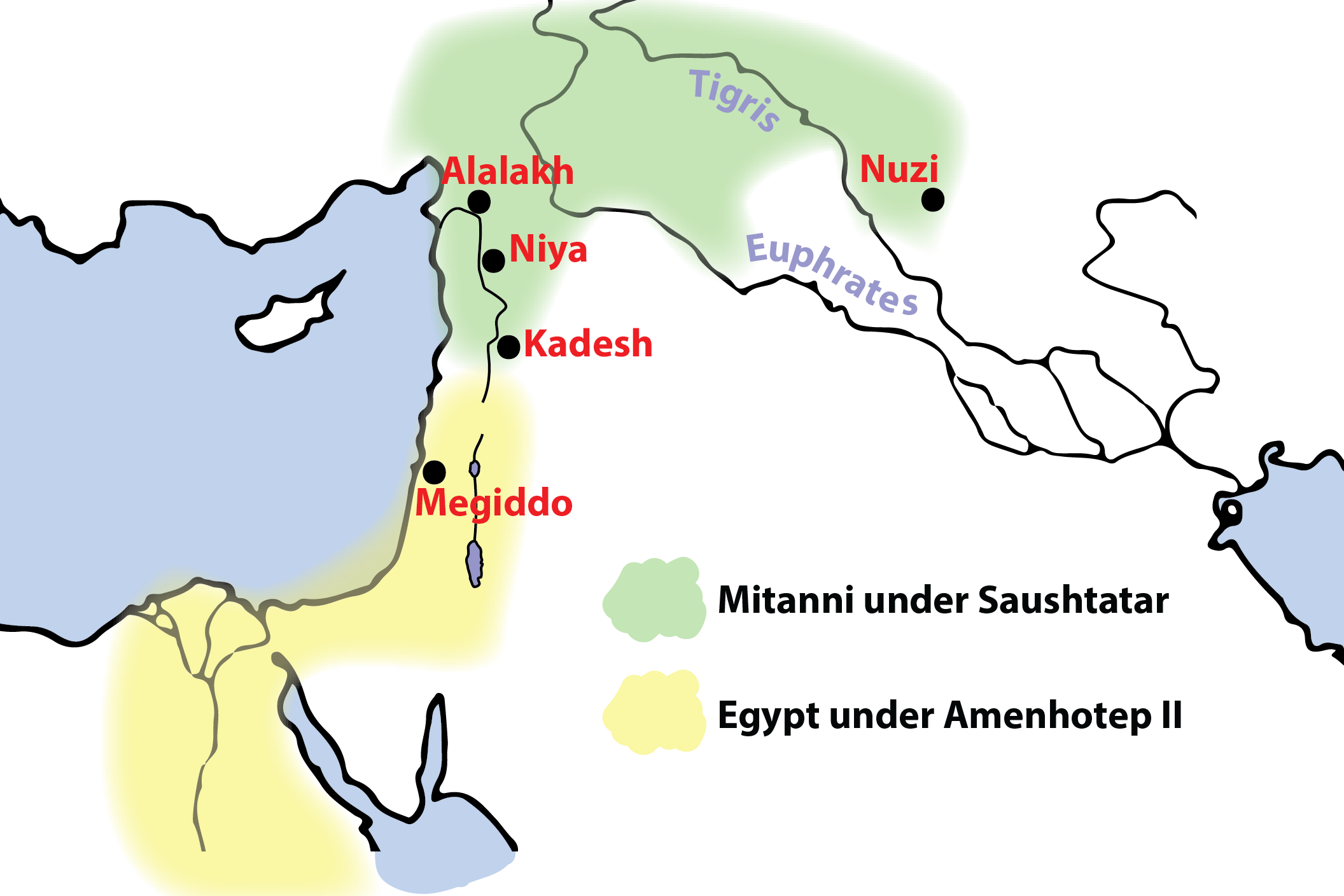 The Battle of Megiddo was only Tuthmosis III’s first campaign. After this pivotal encounter, he continued on a remarkable series of campaigns into the Near East to consolidate territory and secure resource, reversing the early 18th Dynasty trend of contraction that we saw last week. Tuthmosis III’s Syro-Palestinian campaigns fall into 2 groups:

Group 1: the Battle of Megiddo subsequent tours of Syria-Palestine

Having defeated the ruler of Kadesh at the Battle of Megiddo, Tuthmosis III pushed further north, establishing a presence at key locations and returning to end rebellions. The benefits of control of this area come in the form of annual taxes and deliveries of quality goods, like Lebanese timber. Unlike the native Egyptian sources (like Acacia), imported Lebanese Cedar wood could be cut into long, straight planks, and so were much more useful, especially for constructing boats.

Tuthmosis III eventually confronted Mitanni directly. He pushed the battle to the Euphrates, destroying settlements along the way in order to thoroughly eradicate any threat: “I destroyed his cities and his villages and set them on fire, and my majesty turned them into ruin mounds, never to be resettled” (according to the Gebel-Barkal stela, discovered in the Sudan). Following in the footsteps of his grandfather, Tuthmosis III erected a stela next to Tuthmosis I’s and engaged in an elephant hunt at Niye on the return journey.

It is for this ambitious, strategically-informed series of campaigns that Tuthmosis III has become known as the Napoleon of ancient Egypt.

In order to ensure annexation was lasting, the policy emerged wherein Tuthmosis III appointed local rulers to city-states which, in theory, now performed as vassal-states loyal to Egypt. However, Tuthmosis III seems to have been constantly involved in missions to Syria-Palestine to quash further rebellions, and these continual rebellions remind us that we should take the Egyptian accounts with a pinch of salt. After all, Mitanni were, at this time, in control of a huge empire and continued to control and influence Syro-Palestinian city-states despite Egypt’s efforts. The numerous rebellions reported by the Egyptians suggest that city-states switched allegiance from Egypt to Mitanni as soon as Tuthmosis III’s back was turned. Kadesh, in particular, seems to have been a persistent thorn in Egypt’s side.

So who were these Great Mitannian kings? We have met Parrattarna, and seen how he controls Idrimi at Alalakh. The next attested king we have is Saushtatar who is known from evidence at the eastern extreme of the Mitannian empire, Nuzi. The Nuzi evidence mentions Saushtatar’s predecessors, so levering them in, we arrive at a list of kings of the order: Parrattarna, Kirta, Shuttarna, Parsatatar and Saushtatar. So you can see that in order to construct a historical outline for Mitanni, we have to rely on incidental information and take educated guesses. For example, knowing that Parrattarna was expanding his Mitannian territory, and that the early New Kingdom kings had met opposition in the form of Mitanni, it seems likely that Parrattarna and his successors were contemporaries of these ambitious Egyptian kings.

So rebellions continued into the reign of the next Egyptian king, Amenhotep II, who decided to make an example of the rebellious city-states. He captured and executed seven princes of Kadesh, and returned to Egypt with their corpses hanging from his boat. They were then hung on the walls of the capital city, Thebes, except one who was taken all the way to Nubia and displayed there as a warning to any would-be rebells in Egypt’s southern kingdom.

But then, seemingly out of nowhere, a treaty is formed between Mitanni and Egypt. Why? This may partly be due to Egypt’s relentless demonstrations of force, but another power was rising in the Near East, and no doubt Mitanni decided to ally with Egypt in order to be better equipped to face their expanding neighbours: the Hittites.

The deal was sealed with in diplomatic marriage between Amenhotep II’s son, Tuthmosis IV and the daughter of Saushtatar’s son, Artatama I. This act marks peace between these two great foes, and also allows us to fill in another blank in our historical outline:

A border was drawn up between the two sides (see the map above), and our focus shifts from warfare, to diplomacy. Happily, we have a unique collection of texts that deal with international relations at this time: the Amarna Letters, which we’ll investigate in the next step.