Find out more
Home / History / Superpowers of the Ancient World: the Near East / The Balance of Power: The Amarna Letters, Gift-Giving and Diplomatic Marriages

The Balance of Power: The Amarna Letters, Gift-Giving and Diplomatic Marriages

In this section, we introduce diplomacy in the Near East, leading with examples from the core collection of diplomatic texts: the Amarna Letters.
View transcript
3.6
One of the things that I find most interesting about international correspondence during the Late Bronze Age are all of the issues and politics that surround diplomatic marriages. Great kings in the Near East were supposed to be like brothers. They were supposed to exchange gifts of equal value as a sign of their mutual love and their equality. The ultimate gift was to give your daughter or sister in marriage, not least because this was a way of transforming this symbolic brotherhood into an actual family relationship. Now, unfortunately, in practise, things didn’t always go this smoothly, not least because Egypt didn’t seem to really buy into this whole principle of equality between kings.
47.4
So while the pharaohs were very eager to acquire Hittite or Mitanni or Babylonian princesses, they do not seem to have sent Egyptian princesses in the opposite direction. This calls the big problem for the other kings, since it would have been quite obvious to members of their kingdom that their princesses were going to Egypt and no Egyptian princesses were coming in return. It seemed like something of an insult. In fact, the Babylonian king was so frustrated that he wrote to the pharaoh and he said, you wrote to me saying “from time immemorial, no daughter of the king of Egypt is given to anyone.” I wrote to my brother saying “someone’s grown daughters. Beautiful women must be available.
92.1
Send me a beautiful woman as if she were your daughter. Who’s going to say she is no daughter of the King?” In other words, send me a beautiful Egyptian woman– any woman– and I’ll pass her off in Babylon as an Egyptian princess. This is an extremely patriarchal world, one in which the women being exchanged seem to have very little agency or voice– that indeed, in many cases, the princesses are not even named. However, a strong woman could turn these conventions on their head. And that’s what the Hittite queen Puduhepa did while negotiating with Ramesses the Second over a marriage between the pharaoh and her daughter.
131.5
Puduhepa was the wife of the Hittite king Hattusili III, but she was also a very powerful figure in her own right. And when she writes to Ramesses about diplomatic marriage, very interestingly, the men– her husband and her son– quickly disappear. And instead, diplomatic marriage becomes about a famous mother-in-law acquiring exotic daughters in law. And she writes to Ramesses and she says, “the daughter of Babylonia and the daughter of Amurru, whom I, the Queen, took for myself– were they not indeed a source of praise for me before the people of Hatti? It was I who did it. I took each daughter of a great king, though a foreigner, as a daughter-in-law.
175
And if at sometime the King’s messengers come in splendour to the daughter-in-law or one of her brothers or sisters comes to her, is this not also a source of praise for me? Was there no woman available to me in Hatti? Did I not do this out of consideration for renown? Puduhepa reminds Ramesses that although kings may have been in the business of swapping daughters like gold or horses, each of these diplomatic marriages also involved a mother-in-law. And in this case, at least, this mother-in-law not only had a voice and agency, she also had fame and renown.

In the previous step, we saw how warfare gave way to peace between Mitanni and Egypt, with Tuthmosis IV marrying Artatama’s daughter to seal the deal. Egypt now entered an era of peace and prosperity, and for the first time in history, we have an archive of texts that give detail on the international system in place at this time… 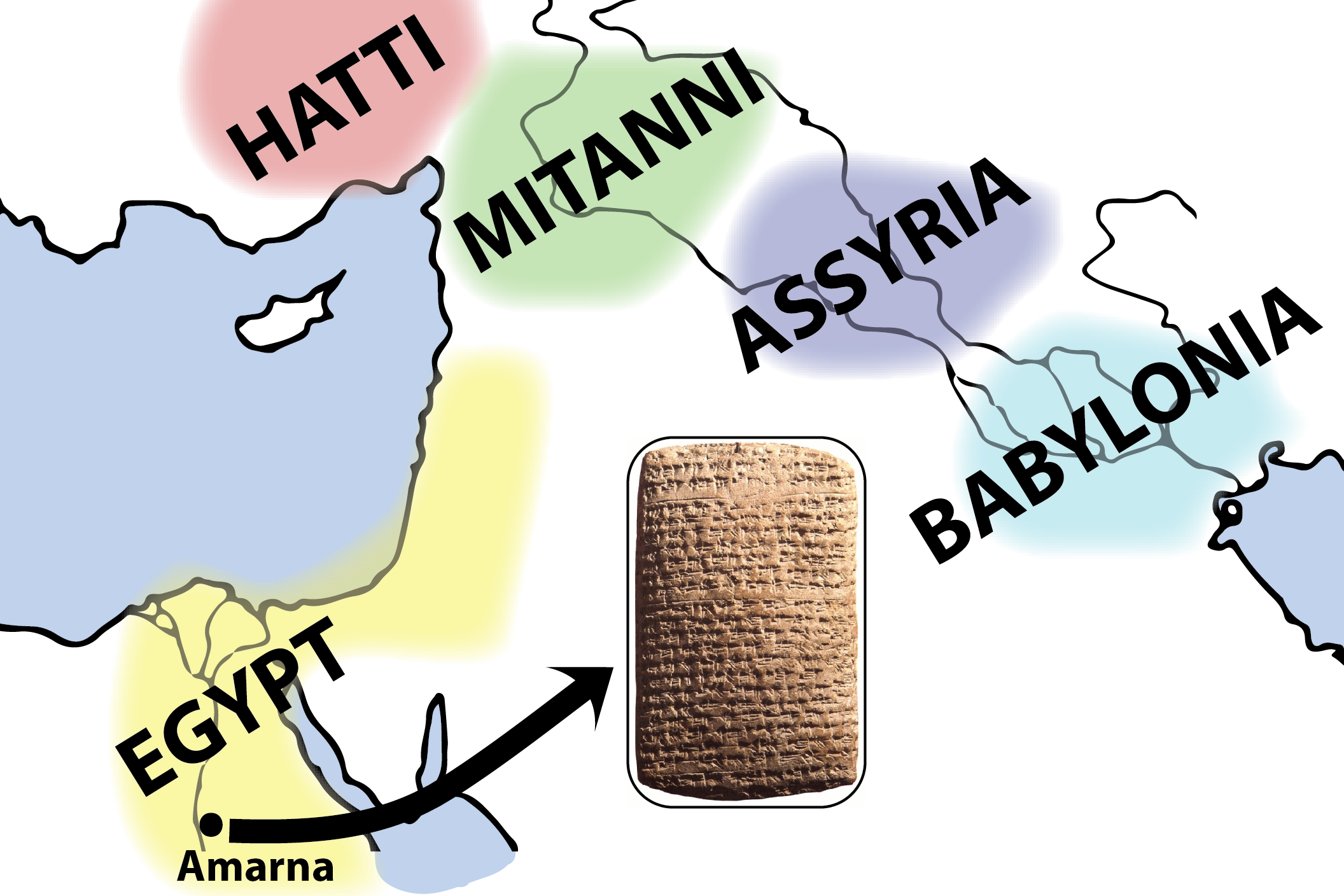 The Amarna Letters are an archive of correspondence that were discovered at the capital city of one of Egypt’s most famous kings: Akhenaten. Akhenaten began life as Amenhotep IV, son of Amenhotep III. However, early in his reign he promoted a lesser Egyptian god to supreme deity, and along with this came significant cultural change seen, not least, in the art of the period. Unfortunately, an examination of this fascinating individual is beyond the scope of this course, but for an excellent introduction, listen to the BBC Radio 4’s In Our Time episode (available as a download at the bottom of this page), in which three leading experts (Elizabeth Frood, Richard Parkinson and Kate Spence) discuss Akhenaten’s reign.

This website, presents some translations of both types of Amarna letter, including a flavour of Rib-Hadda’s relentless missives.

Finally, the letters provide us with names of Great Kings ruling at the time, so we can add to our list of Mitannian rulers: