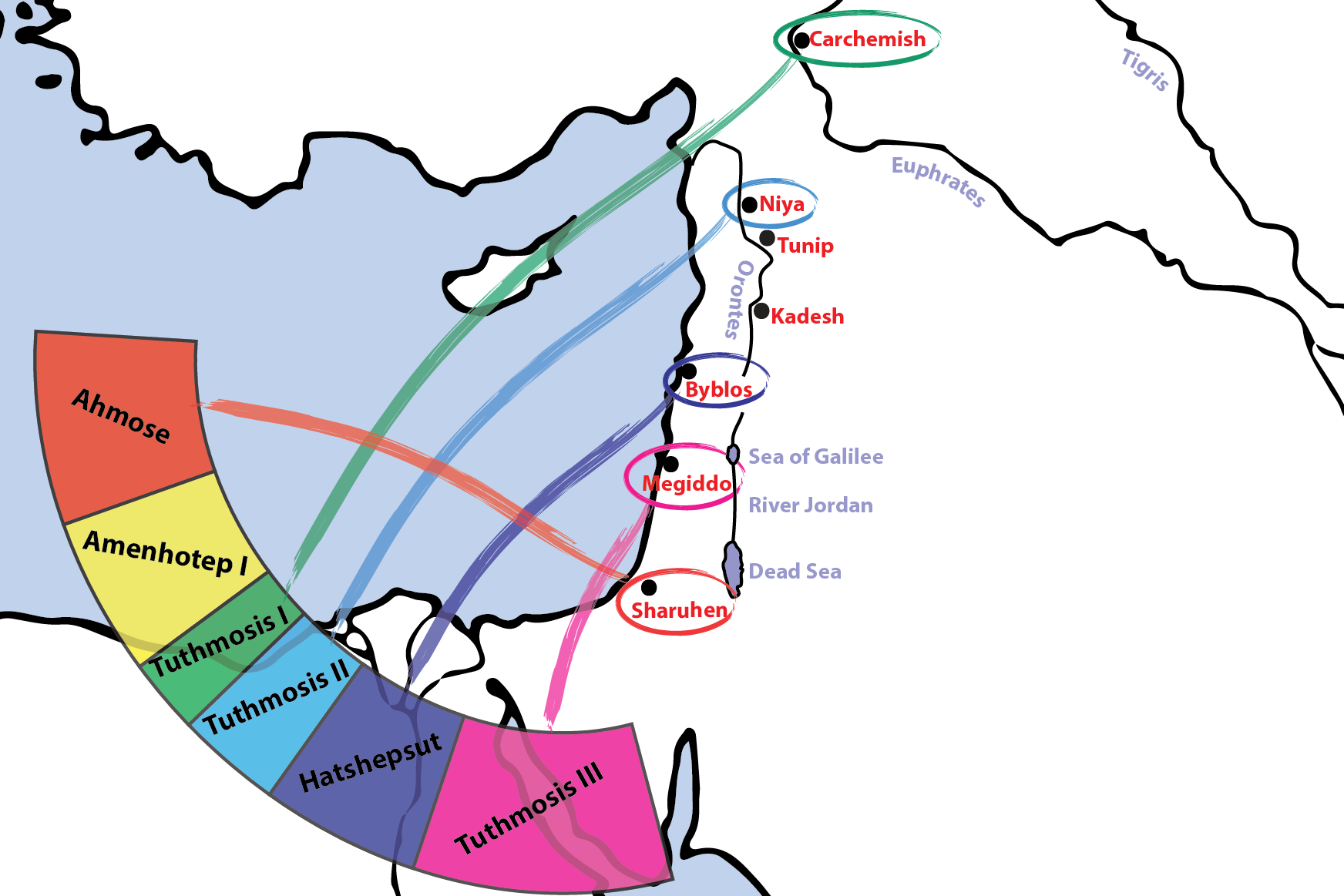 Take a look at the image above. It illustrates the reach into Syro-Palestine of the first Egyptian rulers of Egypt’s 18th Dynasty: the first dynasty of the New Kingdom. The New Kingdom is best characterised as Egypt’s age of empire, so we expect to see each ruler penetrating further into foreign territory. However, these first Pharaohs appear not to be doing that. In fact, the opposite appears to be the case (this diagram only takes us up to Tuthmosis III’s first campaign. We’ll soon see that his campaign to Megiddo was a turning point for Egypt in the Near East). In this short article, we’ll look at each of these rulers in turn, and see how Egyptian expansion into the Near East was not entirely straightforward.

Ahmose After the Hyksos

Professor Eyre has described the expulsion of the Hyksos to us, and the creation of a new military elite. Egypt were now ideally placed to expand into Syro-Palestinian territory, and there were two good reasons for this:

Both of these aims are realised in Ahmose’s next actions. When Ahmose took Avaris, the Hyksos fled into the Near East, to Sharuhen (modern Tell el-Farah). Any plans for a Hyksos counterattack were quickly quashed by Ahmose who marched on Sharuhen, besieging the city for 3 years. There is some evidence to suggest that Ahmose launched further campaigns into Syro-Palestine, but neither he or his successor (Amenhotep I, for whom we have no firm evidence of activity in the Near East) could match the military achievements of Tuthmosis I.

Ahmose son of Ibana served Tuthmosis I, stating that “His Majesty reached Nahrin and found that foe (an oblique reference to our second Superpower whom we’ll meet next week) marshalling troops.” Nahrin is the ancient Egyptian term for northern Syria, and Tuthmosis I’s arrival this far north is also attested in an inscription that he left in Nubia, in which he references a northern inscription (which hasn’t survived) marking his new northern frontier. On the return journey, he hunted elephants at Niya (on the Orontes River), in his newly captured territory.

Tuthmosis II to III: Build up to Megiddo

Tuthmosis II’s campaign reached a little to the south of his predecessor. He arrived at Niya, on the Orontes River. Hatshepsut’s missions in the area took her to Byblos, further south still. Byblos appears to have been a long term ally of Egypt, with objects found demonstrating contact back to the Old Kingdom. Clearly, this was an important maritime trading port, and one that has a significant role to play in the coming weeks of the course.

It is difficult to know why the general trend in the early 18th Dynasty is towards a shrinking empire rather than an expanding one. Next week, we’ll look at contemporary events in northern Syro-Palestine, and they might shed some light on the limits of Egyptian control there. Regardless, it seems that the razzia-style operations of these early 18th Dynasty Pharaohs were not conducive to lasting control, and Syro-Palestinian city-states no doubt enjoyed relative calm during this period. It wasn’t long before some of them took advantage of this calm to rebel against Egyptian interest in the area. In particular, Tunip and Kadesh expanded. Kadesh in particular exerted its influence southwards, encouraging revolt amongst city-states. It is this large coalition of rebellious city-states, led by the King of Kadesh, that Tuthmosis III had to face in his first major campaign.

Next, we will see how the Battle of Megiddo represents a turning point in Egyptian attitude to the Near East.