System Dynamics extends system diagrams to matematical models which allow the interacting changes in system to be computed through time. 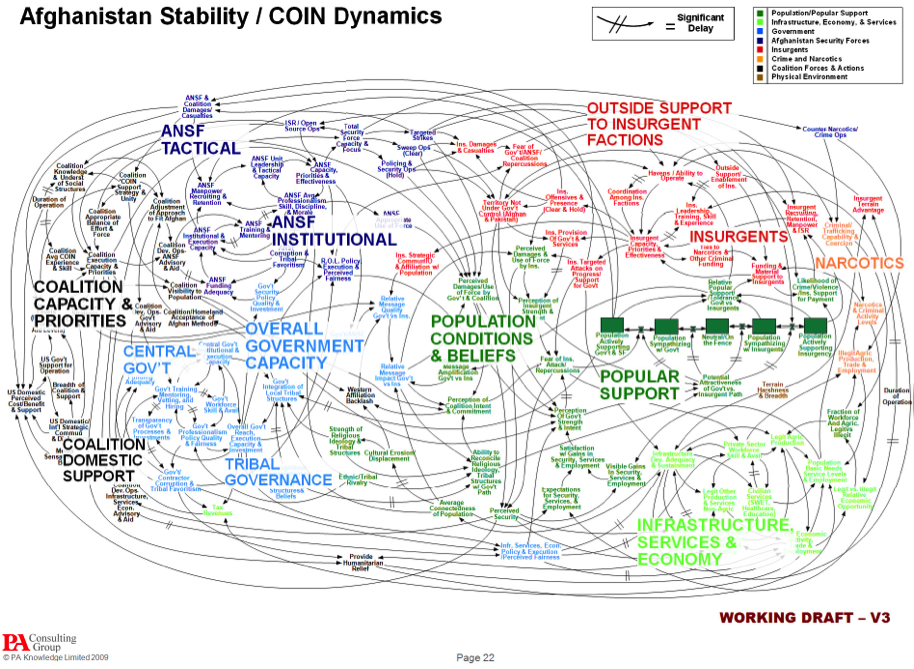 System dynamics, developed by J. W. Forrester in the 1960s, goes far beyond diagrams to analyse the behaviour of complex systems using qualitative and quantitative methods to model the dynamics of systems.

The models of Systems Dynamics go beyond those of sign graphs by providing mathematical fomulae to produce the value for the change at a node at time t+1 based on all the input values at time t. This enables the values associated with each node to be computed through time as a computer simulation. We will say more about this in the context of the Science of Complex Systems in Week 2. Thus System Dynamics lies at the intersection between qualitative systems thinking and quantitative complex systems analysis.

Although systems diagrams can give deep insights into the behaviour of systems, they have their limitations. For example, by themselves complicated diagrams may not make it easy to understand large complex systems with many qualitative and quantitative elements, and many interacting feedback loops.

What do you think of the systems diagram above which depicts US military strategy in Afghanistan, which was criticised in the New York Times for its complexity?

In a letter to The Times dated 3 May 2010, Jon Moynihan of PA Consulting Group gave a robust defence, including:

You printed what has been dubbed on the internet a “spaghetti” chart, depicting the current Afghan environment … However, ours was far from being over-simplistic PowerPoint, using instead a well-known technique — system dynamics — to review a highly complex situation. Unlike linear thinking, the default mode of the human brain, system dynamics thinks about repercussions and occasionally unintended consequences of actions. This chart was … designed to be part of a broad briefing, where it was slowly revealed alongside a verbal description of each major element. … This chart, with its attempt to grapple with complexity, was a dream for those wanting to respond trivially. But do we really want simplistic philosophies to win out … Do we want strategies developed that take no account of complexity and the sometimes counterintuitive outcomes of well-intentioned actions? [2]

In the comments to this step, course participant JR wrote:

Here is another map that shows how complex the issues can be: this one is taken from the UK Government’s Foresight team in 2007 when they tried to show why there is a tendency for people to put on weight and then find it hard to lose it. If you look you can see that whilst “energy balance” (how much you eat, how much you burn off) is in the middle of it there are very many other influences and forces at work that are generally beyond what one individual can control. When this came out, it did make one wonder if it was simply so complicated to be overwhelming – where do you start? Who needs to be involved? What comes first? Who is responsible? Where’s the nearest chocolate?

This map is supported by an excellent report explaining how it was produced. This includes a review of systems theory. If you have time after this course it is highly recommended [3].

[2] Jon Moynihan, ‘In using charts to grapple with complex situations we should support dynamic thinking and avoid the over-simplistic’, Letter published in The Times Newspaper, 3rd May 2010.

Do you think the system diagram above is clear and understandable, or too complex to be useful? Are you convinced by Jon Moynihan’s argument?

Do you think systems diagrams can help in understanding the way systems work? You can add your comments below.