Find out more
Home / IT & Computer Science / Coding & Programming / Teaching Physical Computing to 5- to 11-year-olds / How do micro:bits work?

How do micro:bits work?

Micro:bit is a type of microcontroller for physical computing projects. It is a low-cost option, that's suitable for classroom use.

Here, I’m going to introduce you to another type of microcontroller which can be used for physical computing projects. The device you will look at is called a micro:bit and is another low-cost option, suitable for classroom use.

You can find information about purchasing micro:bits on the micro:bit website.

Key features of a micro:bit

The micro:bit is a small digital device which you can use to control physical computing projects. Unlike the Crumble microcontroller, you can also use a micro:bit on its own, because it has some built-in inputs and outputs. Like a Crumble, you need to program the micro:bit from another device.

The Crumble and micro:bit are both designed with education in mind. The Crumble is a simpler device, which learners can build projects around, but it’s reliant on connected components. On the other hand, the micro:bit has built-in inputs and outputs, but is slightly more complicated to connect to physical computing projects.

The front of the micro:bit contains a grid of 25 red LEDs, which you can programme to light up to show different patterns, display simple pictures, or show scrolling text. Along the bottom edge of a micro:bit, there is a set of pads which you can use to connect external components, such as motors, in a similar manner to using a Crumble. You can also connect a set of headphones to the edge pads and program the micro:bit to play sounds. The most recent version of micro:bit, version 2, also includes a built-in microphone and speaker.

The micro:bit has multiple inputs built into it, which you can use as part of your physical computing projects. On the front face, there are two buttons labelled ‘A’ and ‘B’, and your program can detect whether one or both have been pressed. The micro:bit has a built-in compass, accelerometer, and light sensor, which mean you can write programs that respond to the device’s orientation or movement, as well as the light level. You can also connect inputs to the pads on the connector edge of the micro:bit.

Radio and Bluetooth functionality is built into the micro:bit, and you can use these to make micro:bit communicate with other micro:bits and Bluetooth-enabled devices.

If you want to use a micro:bit as part of a physical computing project, you may need to buy additional components. There are a number of add-ons available to make it easier for you to connect and control motors.

Microsoft MakeCode also includes projects for you to try out on the micro:bit. These projects include a guide which takes you through writing the programme. 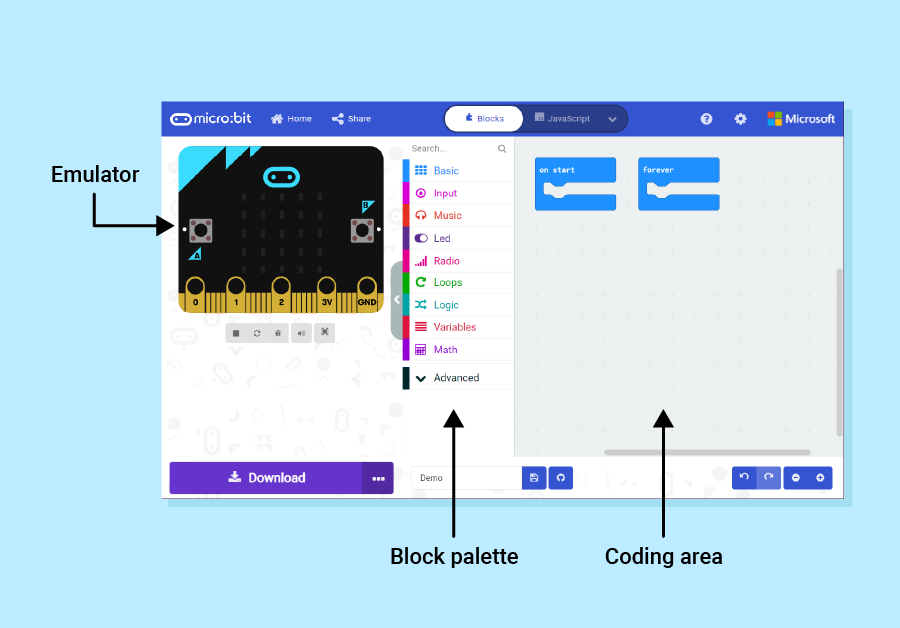 The MakeCode micro:bit programming environment is shown above. On the left side of the screen is a virtual micro:bit which you can interact with by clicking on it. The centre panel contains the block palette from which you can select blocks for your program, by dragging them from the palette to the coding area on the right-hand side of the screen. Like other block-based programming languages, the blocks snap together when you place them in close proximity. You can start your programme by clicking on the play button under the micro:bit image.