Diet, carbohydrates and fibre: an introduction

In this article, we will present to the learner the relationship between structure and interaction and impact on the gut microbiota. 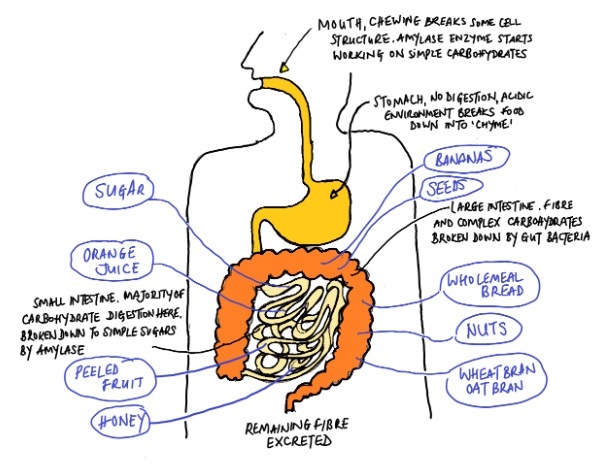 Macronutrients, such as fat, protein and carbohydrates, are the key components in our diet, essential for energy and healthy living.

To put it simply, they are a combination of starch, sugars and fibre that, when broken down provide energy for the body, in the form of glucose.

The amount and type of carbohydrate you eat is important, at least half the energy in our diets should come from carbohydrates, mostly as starchy carbohydrates.

All carbohydrates are compounds of carbon, hydrogen and oxygen. One common way of classifying them is according to their structure. They can be divided into 2 main groups:

Monosaccharides are the simplest carbohydrate molecules and include glucose, fructose (found in honey and fruits) and galactose (mainly found in dairy products).

These include oligosaccharides and Polysaccharides.

Oligosaccharides are carbohydrate molecules that have longer carbon chains of between 3 and 10 carbon molecules (for example inulin is a fructan found in onions and chicory root).

Polysaccharides are made up of many monosaccharide molecules. Examples include starch (containing glucose chains, is the main type of carbohydrate in the human diet, and a major source of energy (‘calories’) found in potatoes, bread, rice and pasta), glycogen (the form in which glucose is stored in the body), also cellulose, beta-glucan and pectin (components classed as dietary fibre).

Although simple carbohydrates are broken down quickly and absorbed readily in the small intestine, only some of the complex carbohydrates are successfully broken down into monosaccharides by a specialised enzyme, amylase. The remaining pass through the digestive tract to be metabolised by gut bacteria.

Did you know that there are lots of different types of fibre?

Dietary fibre is a type of carbohydrate that can neither be digested nor absorbed in the small intestine, where the majority of foods are broken down and their nutrients are absorbed.

Originally, it was thought that dietary fibre was completely indigestible and did not provide any energy. It is now known that some fibre reaches the large intestine, where the vast majority of gut microbiota exist and is fermented by gut bacteria.

This fermentation allows good bacteria to grow and proliferate and also produce beneficial metabolites, such as short-chain fatty acids. Fibre, however, can be classified further into digestible, non-digestible, and resistant starch.

Otherwise known as soluble fibre is found in foods like fruit and oats and is a major source of ‘food’ for our gut microbiota and our gut cells.

Common types of digestible fibre include:

Otherwise known as insoluble fibre, is found in whole grains and nuts. This fibre is not, or only slowly, digested by the gut bacteria but, importantly, serves to bulk up our faeces.

Types of non-digestible fibre include:

Resistant starch is a form of starch that cannot be digested in the small intestine, as a result, it is classified as a type of fibre, found for example in whole grains, seeds, legumes, potatoes and bananas. RS passes through the small intestine intact and is then fermented in the large intestine, which serves as an energy source for colonic cells.

Although dietary fibre is critical to the health of the microbiota, our gut, and a wide range of health benefits, there are aspects about plant-based foods that determine the availability of fibre, and its nutritional and health impact.

One of the most important aspects of plant-based foods is structure, and how it affects the digestion of carbohydrates.