You already learned about the importance of carbohydrates and fiber in shaping your gut microbiota. But food is composed of more molecules! Can these additional compounds also influence the gut microbiota? and can the gut microbiota also affect them? Read to learn more.

They are essential for healthy living and include fats, proteins, and carbohydrates. Given that you already learned about carbohydrates, here we will only see the influence of proteins and fat on the gut microbiota.

Proteins are the prime source of amino acids. Even though all proteins are made by amino acids, the gut microbiota responds differently whether the proteins have an animal or vegetal origin. For instance, higher consumption of animal protein tends to increase the amount of Bacteroides and Clostridiales, related to detrimental effects. On the contrary, plant-derived proteins, like pea proteins, have been observed to increase beneficial bacteria, such as Bifidobacterium and Lactobacillus, and reduce potentially pathogenic bacteria like Clostridium perfringens. 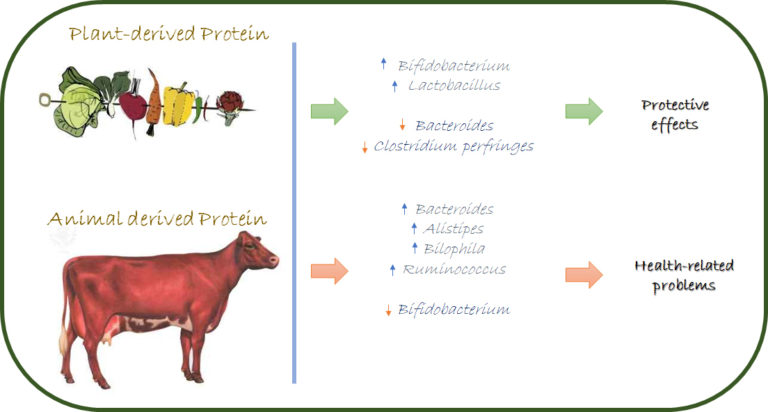 Intervention studies in humans suggest that fat also indirectly modulates intestinal microbiota composition. In this way, saturated fat increased two genera called Bilophila wadsworthia and Alistipes putredinis, and reduced bacterial diversity. In contrast, unsaturated fats, such as omega-6 and omega-3 (commonly named as “healthy fats”) have been linked with numerous health outcomes. For example, mice fed unsaturated fish oil did not develop metabolic impairments, and their gut microbiota was characterized by expansion of the recognized beneficial as genera Bifidobacterium, Akkermansia, and Lactobacillus.

These are nutrients needed by the body in small amounts, like minerals and vitamins, and which are fundamental for the correct functioning of our body. As you probably know, the diet is the primary source of vitamins. Besides, the gut microbiota is able to synthesize in our gut the vitamin K and B group vitamins!

These are non-nutrients present in food that may have a positive or negative effect on your body. Some examples are, some sulfur-containing metabolites, or polyphenols (about which you will learn [in the next 2.15] (/courses/the-human-microbiome/1/steps/917661)). Do you like the spicy flavor of mustard or radish? Did you know that the responsible compound for this favor are the glucosinolates? Importantly, glucosinolates are not themselves bioactive until they are degraded; in such a way that several studies have suggested that the gut bacteria act as the piece that “activates” them.

In this sense, some genera like Lactobacillus and Bifidobacterium are metabolizers of the glucosinolates, and accordingly, these compounds might favor the presence of these genera in the gut. Finally, did you know that the gut microbiota produces a compound with the smell of rotten eggs? Yes, our bacteria are also good at this! The reason is that microbiota can ferment certain amino acids and release gases like hydrogen sulfide (H2S).

This bioactive compound is responsible for the recognizable smelly odour. Still, aside from this the fact, H2S is a particularly interesting case as it has been related to both beneficial and detrimental effects, mostly depending on the concentration tested. In excess, H2S can damage gut epithelium. For this reason, even in high-protein diets that work for weight loss goals, the long-exposure to this protein microbiota-derived metabolite raises doubts about having a negative outcome in general health.