Find out more
Home / Healthcare & Medicine / Disease Outbreak Prevention / The Global Challenge of Vector Borne Diseases and How to Control Them / Biology, Habitats and Diseases of Ticks

Biology, Habitats and Diseases of Ticks

This article discusses and explains the biology, habitats and potential diseases that ticks can carry. 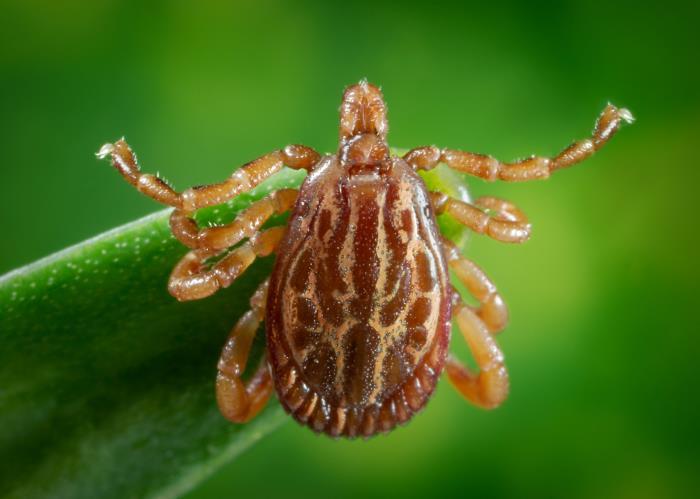 Ticks are obligate haematophagous (blood-feeding) ectoparasites that feed on a variety of vertebrate host animals, including mammals, birds, reptiles and sometimes amphibians. They transmit a wide range of disease-causing organisms and are of great medical and veterinary importance. Ticks have been known as a nuisance and a pest of humans and animals for centuries. A depiction of ticks infesting a hyena-like animal was found in an Egyptian tomb dating from about 1500 B.C.E.[1] In 1893, Smith and Kilbourne demonstrated for the first time that ticks transmit pathogens, in this case the protozoan Babesia bigemina, causative agent of the Texas cattle fever, by the cattle tick, Boophilus annulatus.[2]

Ticks are arthropods closely related to mites, with which they form the subclass Acari within the class Arachnida. Arachnids differ from insects and other arthropods by their four pairs of legs (except in larval ticks), their two pairs of mouth-associated appendages (chelicerae and pedipalps), and their absence of antennae or wings.[3]

Members of the Acari are the only known parasitic arachnids. All ticks belong to the suborder Ixodida of the order Parasitiformes, as shown in Figure 1. Ticks can be distinguished from mites by their toothed hypostome, which is used by a tick to attach itself to the host while feeding, and by the sensory Haller’s organ on the furthest part of the first pair of legs.[3]

Figure 1. General phylogeny of the *Acari[4]*

The 896 known species of ticks can be further divided into three families: the Argasidae (soft ticks, 193 species), the Ixodidae (hard ticks, 702 species), and the Nutalliellidae (which consist of only one species from Africa, Nuttalliella namaqua).[5] A current phylogeny of the Ixodida is depicted in Fig. 2.

Hard ticks can be easily identified by their visible mouthparts, and by the presence of the scutum, a plate-like shield on the dorsal surface.[3] They normally feed only once during each of the three parasitic life stages (larva, nymph, adult) and remain attached to the host for a long time.[6] The name of the species Ixodes ricinus is derived from the greek word ‘ixos’ for the European mistletoe plant (Viscum album). Its sticky berries were commonly used since Roman times to make adhesive traps for birds, thus resembling the strong attachment of ticks to their hosts (W.A. Maier, pers.commun.).

Soft ticks lack a hardened upper surface and have less conspicuous mouthparts than ixodid ticks. They feed repeatedly, each time taking only small amounts of blood, and remain normally in the close vicinity of their hosts, such as in their nests and burrows (endophilic behaviour).[6] While some soft tick species do transmit diseases (see Table 2), hard ticks are by far more important vectors for several zoonoses (infectious diseases that can be transmitted between animals and humans), and are considered the most important ectoparasites of livestock.[6] Table 1 gives an overview of the main characteristics of hard ticks and soft ticks.

Within the Ixodidae, a further distinction can be made between prostriate ticks (subfamily Ixodinae, consisting of the single genus Ixodes with 243 species) and metatstriate ticks (all other genera of hard ticks with 459 species), which is mainly based on morphological details.[5] 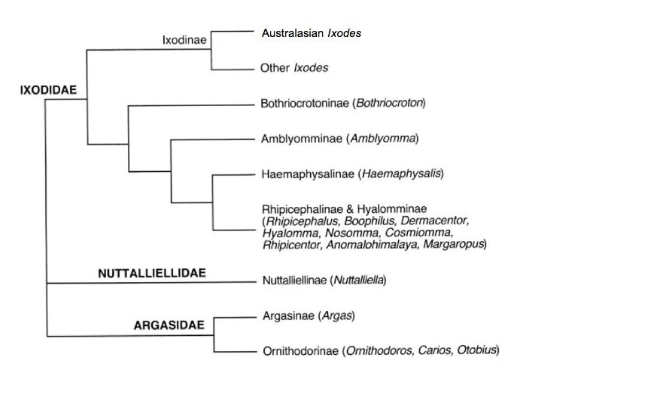 Figure 2. Phylogeny of the families and subfamilies of the suborder *Ixodida.[7]*

The life cycles of ixodid ticks, during which there are four stages (egg, larva, nymph, and adult), take between one and six years. Each of the three parasitic stages seeks a host; attaches, feeds and drops off. Most ixodid species require a new host for each feeding stage (i.e. they are three-host ticks). Hosts may be confined to one single species or can come from a wide range of vertebrate animals, as in the case of the sheep tick Ixodes ricinus (see Fig. 4).[3]

Exophilic ticks such as I. ricinus actively seek their hosts by questing in the vegetation, whereas endophilic and nidicolous species such as the hedgehog tick I. hexagonus remain in the nests or burrows of host animals to feed on them. Before the feeding act itself, a tick may wander around while searching for a suitable position on the host’s body. The duration of the feeding ranges from 2-6 days for larvae, 3-8 days for nymphs, and 6-12 days for adult females, while adult males rarely feed at all. In metastriate and exophilic prostriate ticks (such as I. ricinus) mating occurs on their host, while endophilic prostriate ticks mate off the host, mostly in the nest site.[3] Feeding is followed by a digestion period and the moulting of larvae and nymphs to the next stage, whilst adult females begin to produce a single batch of 1,000-10,000 eggs, after which they die. In total, hard ticks spend only a small amount of time on their hosts, but over 90% of their life in long periods of resting and development, mostly hidden in the vegetation layer or in the host’s nest. They are prone to desiccation and thus require protection against high temperatures and low levels of relative humidity.[3]

Geographical Distribution and Habitats of Ticks

Ticks occur on every continent and are even found in marine colonies of seabirds across the Northern and Southern hemispheres; for example I. uriae.[8] The four Ixodes species that are mainly responsible for the transmission of Lyme Borreliosis (LB) and other zoonoses are members of the Ixodes ricinus-persulcatus species complex and occur in temperate regions of the Northern hemisphere (see Fig. 3).[6] The Taiga tick, I. persulcatus, has the widest distribution of these four species, ranging from Poland in Central Europe across the entire region of boreal forests in Eastern Europe and Asia to Japan and Korea.[9,10] The sheep tick (I. ricinus) occurs in temperate regions of Europe between the latitudes 65° N and 39° N, and extends eastwards from the British Isles (10° W) across Europe into Asia at a longitude of 60° E, partially overlapping with the distribution of I. persulcatus in Central and Eastern Europe.[11] Ixodes ricinus has also been found in North Africa.[11] In the Nearctic region, I. pacificus ranges across the Western seaboard of North America from Southern Canada (British Columbia) to Northern Mexico, and as far inland as Idaho and New Mexico.[10] The blacklegged tick I. scapularis can be found along the East coast of North America from Southern Canada (Nova Scotia, Quebec) southward to Florida, and westward to Texas.[10] It also occurs in the Midwestern US, but its distribution there is fragmented into three separate areas, each with a different LB epidemiology. 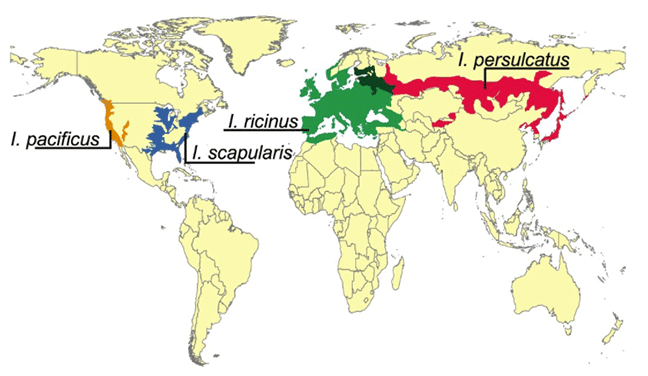 Fig. 3. Geographical distribution of four *Ixodes species that are the main vectors for LB in humans.[12]*

Host specificity is measured by the degree of dependence of a tick species on a particular host species or group when these are available.[3] Host specificity in ticks can range from strict (as in the case of I. lividus, which feeds exclusively on the sand martin Riparia riparia) to moderate (e.g. in the bat tick, I. vespertilionis which parasitises several species of bats) to the very broad and catholic host range of generalists, such as I. ricinus.[3] For Northwest Europe alone, over 55 different species and groups of host animals for all three stages of I. ricinus are listed[3], while other hosts absent on the British Isles are also parasitised in mainland Europe, such as wild boar (Sus scrofa) or European elk (Alces alces).[13,14]

The three stages of I. ricinus ticks parasitise different host groups in different proportions, with larvae mainly feeding on rodents, such as wood mice (Apodemus sylvaticus) and bank voles (Myodes glareolus), nymphs on birds and medium-sized mammals, and adult females on large mammals, such as deer and sheep.[6] These large host animals are vital to maintain tick populations in areas with favourable climatic conditions.[11,15] Together with migrating bird species they are also important for the distribution of ticks across long distances.[16,17,18] 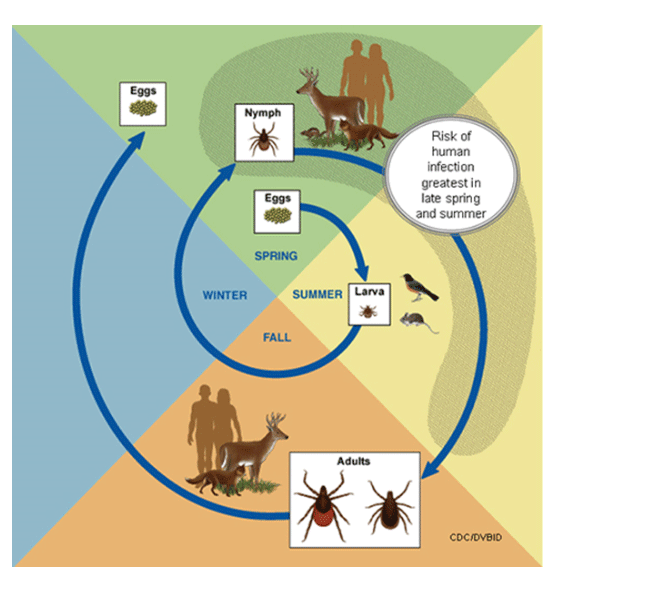 Fig. 4. The life cycle of blacklegged ticks (I. scapularis) that can transmit anaplasmosis, babesiosis, and Lyme borreliosis (LB).[19]

Apart from mosquitoes, ticks are the second-most important vectors of human diseases worldwide, and the main disease vectors in the Northern hemisphere.[20] Globally, they are also the most significant vector of diseases affecting livestock.[21] Ticks transmit a wider variety of pathogens than any other group of arthropod vectors, including viruses, bacteria (including spirochaetes, i.e. spiral-shaped bacteria with a flexible cell wall), and protozoans.[21]

There are several reasons why hard ticks are such efficient disease vectors:[3]

Table 2 gives an overview of the major tick-borne diseases, but this list is not exhaustive, and new pathogens are frequently being discovered.