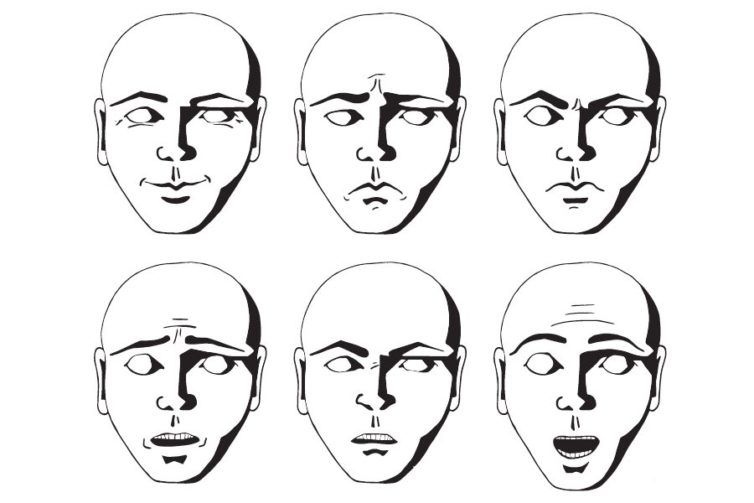 Another lesson we can take from human nature concerns our universal behaviours, in the form of nonverbal communication.

While many of the ways we communicate nonverbally are culture-dependent, we can identify some actions that are broadly used by all peoples. There may be some slight cultural and learned variations, but for the most part, these actions can be read and understood around the world.

These actions are used to communicate basic emotional or affective states. Because they are used in most cultures, it is useful for character designers to understand and recognise them. I’ve broken this down into two categories: body posture, and facial expression.

By posture, I mean the way we position and orient our body in social situations. Our posture can indicate our emotional state or mood to others. We can break posture down as follows:

Just like posture, there are a series of universal facial expressions that betray our emotional states. Because these expressions are universal, they can be an excellent technique for conveying emotional state subtly through a character performance. Facial expressions can even be used as the basis for a whole character design that kids will understand instantly. Think of the difference between Toad and Goomba in the Super Mario series!

The universal expressions of emotion are:

Try viewing a cut-scene or narrative sequence in a recent video game. How are the characters’ postures and facial expressions used to communicate emotion or feeling between characters?

This can be particularly interesting within gameplay sections, when the player may have some ability to move the camera around the characters. Bigger and more expressive movements may be used within the characters to make sure that the player doesn’t miss them. Or maybe the designer has exercised more control over the camera at key points of the animation, to ensure that the posture or expression is appropriately staged and not missed by the player.