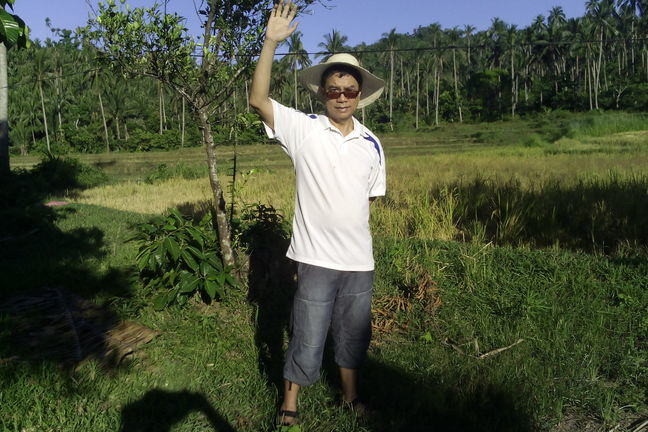 This photo was taken while I was visiting my grandfather's farm last Summer of 2015 when I introduced organic farming to help augment theIr income after the coconuts were infected by coconut scale insects, locally known as "cocolisap."

Hello from the Philippines!

Welcome to this course on “Climate Justice: Lessons from the Global South”.

My name is Rainier A. Ibana and I teach Environmental Ethics and Philosophy at Ateneo de Manila University in the Philippines.

I recently had the opportunity and privilege to chair the Environmental Ethics Working Group of UNESCO’s World Commission for the Ethics of Science and Technology (COMEST) where we drafted Reports for UNESCO’s project to formulate “Ethical Principles for Climate Change Adaptation and Mitigation.”

UNESCO would like to share the results of these efforts to a larger audience. We are offering some of the most important points by developing this free online course with the assistance of FutureLearn. COMEST’s documents are available on-line for your reference.

The Paradox of the Global South

I believe that putting the results of these group projects together, by articulating a Climate Change Ethics from the perspective of the Global South, is very important because of the major paradox that the Global South faces when it comes to the issue of climate change. That is: these communities are the most strongly affected by the adverse effects of Climate Change such as desertification, rising sea levels, extreme weather conditions such as floods and droughts, among others; and yet this is in spite of the fact that these same vulnerable communities often have the least contribution to the causes of climate change, such as the emission of carbon dioxide and other industrial pollutants.

It is therefore important to hear about the principles and solutions that come from the perspective of the Global South. As COMEST reiterated in its various reports,

“… the vulnerable groups of society are not mere victims of the regime of climate change but can also be engaged as active participants in finding solutions to the complicated problems entailed by climate change.” 1

Aside from my experience with UNESCO’s working groups on environmental ethics and the philosophical perspectives of the Global South, I also grew up in a region of the world that has experienced many natural calamities. I think there are many lessons that can be learned and shared from those who endured and survived the adverse effects of climate change.

The designations employed and the presentation of material throughout this course do not imply the expression of any opinion whatsoever on the part of UNESCO concerning the legal status of any country, territory, city or area or of its authorities, or concerning the delimitation of its frontiers or boundaries.

The ideas and opinions expressed in this course are those of the authors of publications and reports mentioned in the course; they are not necessarily those of UNESCO and do not commit the Organization.