This content is taken from the University of York's online course, Becoming a Digital Citizen: an Introduction to the Digital Society. Join the course to learn more.
View course
3.13 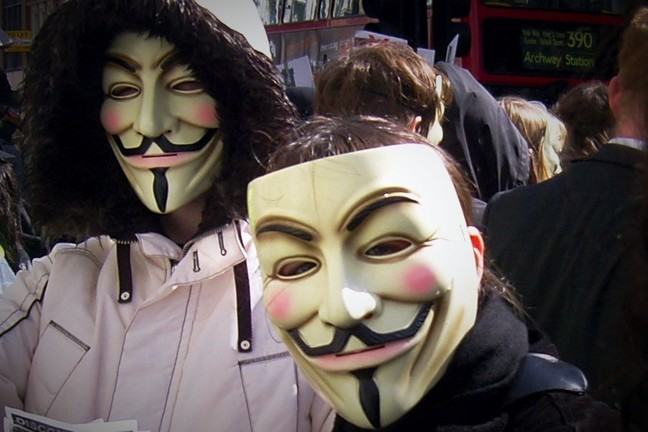 The iconic Guy Fawkes mask drawn by David Lloyd for Alan Moore’s graphic novel V for Vendetta is now probably more synonymous with ‘hacktivist’ group Anonymous. The impact of the group has been sufficient that they even made Time’s 2012 list of the 100 Most Influential People in the World. But is their influence a positive or negative one?

What are Anonymous’s objectives? Do they even have objectives? Anonymous is not a cohesive organisation so much as a hive of loose associations. There is no defined leadership structure, no overarching strategies, no head (as their other iconography of choice, the headless suit, makes explicit). This looseness extends to ideology: as a 2012 Guardian article put it: “If you believe in Anonymous, and call yourself Anonymous, you are Anonymous.” In that regard, past actions set the agenda, but even past actions are inconsistent.

There are two versions of Anonymous at play: on the one hand there are the lulz-seeking doxxers: cyberhooligans, publishing stolen information and disrupting services for the kick of the public embarrassment and humiliation it causes; on the other hand there’s the Robin Hood approach: outside the boundaries of legality but fighting the battle of individuals and the freedom of the internet versus careless and unscrupulous multinational corporations and oppressive governments. One person’s terrorist is another person’s freedom fighter, or so the cliché goes. In January 2011, Anonymous played a not insignificant role in the Tunisian revolution that began the Arab Spring, creating surveillance blockers and launching distributed denial of service (DDoS) attacks against the Tunisian government. The following year, Anonymous targeted the owner of a ‘revenge porn’ site, stating:

…we will protect anyone who is victimized by abuse of our internet; we will prevent the stalking, rape, and possible murders as byproduct of his sites.

So are Anonymous vigilantes working to counter cyberbullying? Or are they as guilty of cyberbullying as some of their targets? Does their operating strategy of hacking then sharing personal information differ all that greatly from, say, the phone hacking activities that earned public condemnation and revulsion when practiced by national newspapers in the UK? The News of the World was the biggest selling newspaper in the country, yet the pariah status it earned from the hacking of a missing girl’s voicemail was instrumental in its closure in 2011. Could Anonymous face a similar social backlash if their activities are seen in a similar light?

One fascinating aspect of Anonymous, given our current celebrity-obsessed culture, is its very anonymity. We’ve been talking a lot in this MOOC about our online identity – identity politics is a big thing – but with Anonymous there is little personal credit to be had; no showy gestures attached to a single individual; one does not go round bragging that one is a member of Anonymous - that would break the anonymity. It is, in fact, a community identity based upon the early ideals of online anonymity we discussed last week. It’s an idea, not a group: an amorphous banner under which people march. One might go so far as to characterise it as a balaclava obscuring the activists within (like many a terrorist / freedom-fighter (delete according to taste)). How they conduct themselves depends upon the individual appropriating that identity. Some are terrorists, some are freedom fighters; or perhaps more accurately (and less inflammatory), some are hackers, some are trolls, some are civil rights activists… There may even be a generational split But all are Anonymous, in spirit and in name. We might even see them as following in a long history of pseudonymous protest identification figures, going back through the likes of Ned Ludd, Captain Swing, Robin Hood, and, via V for Vendetta, “V”, bearer of the Guy Fawkes avatar from which their most recognisable face derives.

Olsen, P (2013) We are anonymous: inside the hacker world of LulzSec, Anonymous and the Global Cyber Insurgency. London: William Heinemann.