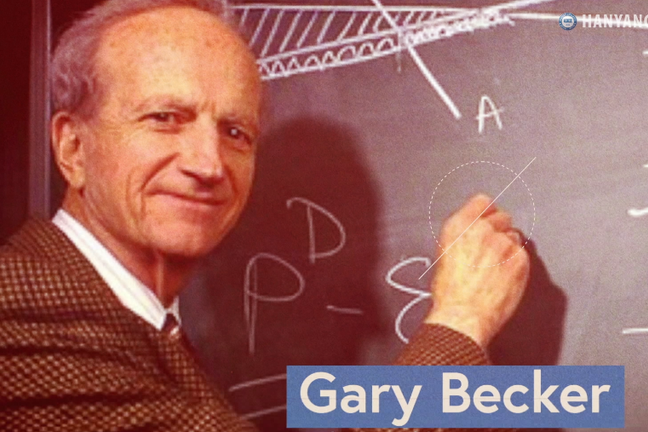 Gary Becker (1930-2014), the winner of the 1992 Nobel Prize in Economics, is considered as the founder of the economics of crime literature.

His 1968 study “Crime and Punishment: An Economic Approach” was the first rigorous analysis on crime done by an economist and inspired many other economists to follow suit.

As many of you with prior coursework in economics know already, a defining characteristic of microeconomics is that it assumes that our behaviors and choices are rational. For example, when we go grocery-shopping with a limited budget, we choose an optimal bundle that would give us the maximum level of happiness (or “utility” in economics jargon). Why would we ever choose another bundle that is not as good but costs the same?

Similarly, when we choose which car to buy and which house to move into, we would always choose the option that is the best for us. Of course, different people would have different preferences and come up with different “optimal” choices. But it is reasonable to assume that each decision-maker will choose the best option available for him. Why would anyone settle for a less-than-optimal choice instead?

where \(u_s\) represents the expected utility when he successfully commits the crime (which may include both pecuniary and non-pecuniary gains), \(u_f\) his expected utility when he commits crime and receives punishment (so this is likely to be a negative number), and p represents the probability of punishment. u̲ represents his level of utility when he does not commit crime. An individual will choose to commit crime if the net expected gains from crime (left-hand side of the inequality above) is greater than the net gains from not committing crime (right-hand side of the inequality).

Consider the following example. An individual is considering whether to become a thief or not. If he “works” as a thief for a week and does not get caught, he will earn $2,000. If he gets caught, he will have to pay the fine of $4,000. He thinks there is a 30 percent chance of punishment if he commits the crime. If he does not steal, he will continue to work at a legitimate job which pays him $500 per week. For now, let’s assume that he is an individual who neither enjoys nor feels guilty about stealing. He only cares about the monetary gains and losses from crime.

Comparing his gains and costs from crime and legitimate work, we would expect him to choose not to steal because

However, in reality, people care about more than just monetary gains and losses when choosing whether to offend or not. People with high moral values would choose not to commit crime even if they can make a lot more money by committing crime. For example, peer pressure may cause students to participate in delinquent activities with their friends, even if there is no monetary gain from doing so.

But these non-monetary factors can easily be incorporated in the rational choice framework. For example, suppose an individual is currently working at a job that does not pay very well, but he is very much content with the life style associated with his job. We would expect that he has a very high value of u̲(and thus has a very low chance of committing a crime).

Likewise, people may have different ideas about the probabilities of arrest and punishment. Even when they live in the same neighborhood and are subject to the same criminal justice system, some people may be just more optimistic than others about the probability of punishment. Clearly, those who more optimistic (low p) should be more likely to commit crime than those with high p. Importantly, even if someone has a unrealistically low value of p, as long as he chooses to offend because his expected gains from crime is greater than his gains from not offending, he is still making a rational choice. He may be poorly informed, but he can still make a rational choice based on his poor information.

The rational choice framework may appear a bit too simplistic and unrealistic at first glance. But it can be easily extended to incorporate other relevant factors, such as non-monetary gains and losses from crime and individuals’ subjective expectations about the probability of punishment. There can be many more different crime-relevant factors that influence people’s criminal decisions in different ways, and trying to come up with a model that accurately predicts each individual’s criminal decision will be difficult. However, the main contribution of the rational choice model of crime is that it views crime as a “choice”: Individuals commit crime because they find it as a better choice than not committing crime (for many different reasons).