What is meant by the concept of ‘rational behaviour’?

Economics as an academic discipline is often blamed for making unrealistic assumptions. One of the assumptions which non-economists generally view as unrealistic is that consumers and producers (i.e. economic agents) behave rationally. Human beings are not like computers making calculations of many alternative options, but we often act intuitively and we are subject to emotions. As economists do not deny this, what do they mean by the assumption of rational behaviour?

This assumption does not mean that economic agents make extensive calculations before making any decision, but it means that these agents act in accordance with their preferences. Hence, the rationality assumption does not say anything about the process of decision making, but on the outcome: the choices made by economics agents are viewed to be consistent with the preferences of these agents. Note, however, that even this assumption is challenged by the insights coming from psychology and behavioural economics.

The assumption of rational behaviour is based on another fundamental assumption in economics which is the one on consumer sovereignty. It is assumed that, in principle, no one can decide for someone else what he or she should prefer. If we cannot assess whether somebody else makes the right decisions for him or herself, we must also assume that all the decisions other people make are rational, meaning that these decisions are consistent with their own preferences.

It is important to acknowledge that these preferences need not to be in monetary values, such as a high income or low prices for consumer goods. The preferences may be of any kind of interest someone has, varying from heating her house to eating high-quality foods. By the notion of rational behaviour, economists assume that consumers pursue the satisfaction of their interests by making choices. To what extent they succeed determines their utility. Hence, utility is also not a monetary quantity, but the value consumers attach to a specific utilization of goods given their preferences.

Why is the concept of rational behaviour important for understanding policies directed at energy transition? The answer to this question has a number of aspects. First of all, if governments intervene in the decisions of consumers and producers, they stimulate them to make decisions which are not in their own interest. After all, if a decision is already in their own interest, stimulating them is not needed. The consequence of letting economic agents make different choices, for instance by a tax on energy, is that they arrive at a lower level of utility. This decline in utility must be seen as a loss of welfare. This loss must be taken into account when we are going to assess the costs and benefits of energy-transition policies. 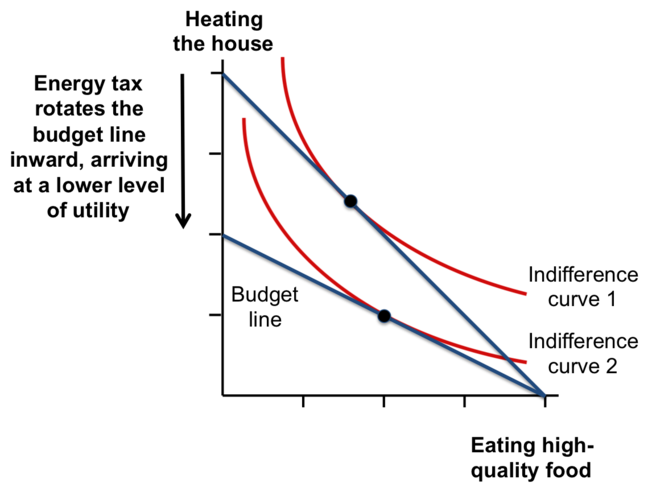 In this graph the budget line represents all the combinations of heating the house and eating high-quality food that a consumer may purchase given current prices within his or her given income. The indifference curve is the locus of various points showing different combinations of the two interests providing equal utility to the consumer. The utility-maximizing solution is then the point where the indifference curve is tangent to the budget line.

Secondly, the concept of rational behaviour is relevant because it helps to define effective policy measures. The way economic agents respond to a specific policy depends on how that response affects their own interests. In response to using a subsidy for replacing an energy-intensive appliance by a less energy-intensive variant, a consumer may decide to use that appliance more intensively because of the lower energy consumption per unit. As a result, the net effect of the subsidy on energy consumption is lower than the initial effect coming from the replacement. This is the so-called rebound effect of energy efficiency, which effect can only be understood if we assume that consumers act rationally in the economic sense of its meaning.