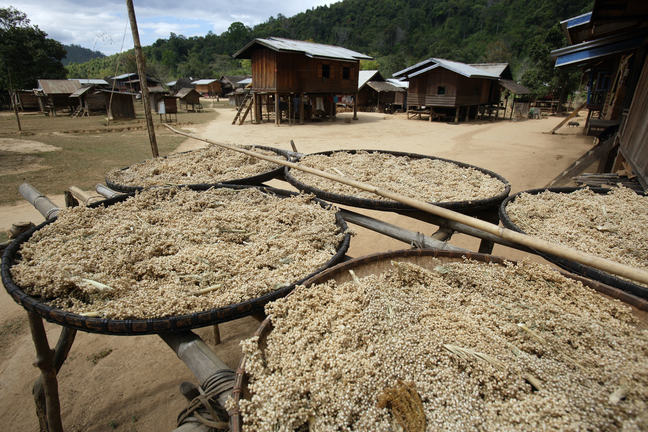 Unhusked rice and another crop left out to dry in the sun, Ban Chaling, Dakcheung, near Sekong, Lao PDR, by DFAT photo library / CC BY 2.0

Over the last decade, Lao PDR’s rice sector has been transformed by a combination of public policy and socio-economic factors: economic growth, economic diversification, urbanization, changing diets, and an aging and declining farm labour force. Many rice growers are also shifting to new, export-driven crops, such as coffee, rubber and bananas. Against this backdrop, this case study article analyses Lao PDR’s rice sector policies and arrives at recommendations for better food system outcomes.

The Lao PDR government has set various goals for the rice sector and country more broadly, including a more productive and market-oriented rice industry, achieving sustainable economic growth, reducing poverty, and achieving food security - with a focus on meeting caloric intake requirements, especially in remote rice deficit areas. A number of policies have been adopted in pursuit of those goals, including export bans; tax concessions; support to individual farmers (seed, electricity, subsidized credit, extension support); as well as research in rice seed and rice nutrient management.

Lao PDR significantly expanded rice production and adopted improved rice varieties in the 1990s, and over the last decade, it has maintained a stable and increasing rice surplus. At the national level, Lao PDR is now rice self-sufficient, but there are differences among provinces, with deficits in the north.

The rice sector also continues to face major constraints, including a weak extension service, difficult access to farm credit, and inadequate post-harvest operations that affect quality. Many poor rice farmers are not able to earn enough from their crops, and the share of households that grow rice has decreased from 77% in 1998/99 to 71% in 2010/11. Rice production is becoming increasingly concentrated in regions with a natural comparative advantage, such as the plains in the southern part of the country.

A detailed simulation of alternative scenarios of rice production and consumption in 2012–2020 shows that Lao PDR’s rice surplus will continue to grow even under the most conservative assumptions, with 0.45–0.5 million tonnes available for export in 2015 in the baseline scenario. However, improved and more coordinated policies could further strengthen the rice sector and bolster food security.

To strengthen the rice sector, Eliste and Santos (2012) recommend policies to:

Facilitate trade in paddy and rice: Lao PDR borders on Thailand and Vietnam, two of the world’s top rice exporters. Both have highly competitive milling and transport infrastructures, which results in higher quality and lower costs relative to Lao milled rice. Developing large modern mills will require significant private-sector investment, which in turn requires a sizable rice surplus for export. To facilitate trade, Lao PDR should eliminate export bans and create a transparent, well-monitored trade environment, or at least replace the bans with an indexed variable export tax.

Strengthen emergency rice seed and food reserves: The government has started a pilot national rice reserve, but to the extent that it relies on barring trade, it will not be effective. Strengthening emergency rice seed and paddy reserves for people affected by disasters, combined with targeted food aid for vulnerable groups, may better achieve the government’s objectives.

Improve the efficiency and effectiveness of public investments: A more balanced approach is needed to allocate resources to extension activities, technology development and transfer (including good seed), and irrigation. The best returns on public spending come from “best practice” extension packages, including good-quality R3 seed, functioning extension, and access to fertilizer.

Take measures to strengthen the rice seed sector: A rigorous institutional review of seed production systems should be conducted to identify areas for reorganization, and institutional arrangements should be made to coordinate and exchange information on seed, including a national seed board. Designated public funding is also needed to produce seed, based on targets for food security and rice exports.

Image Source: “Unhusked rice and another crop left out to dry in the sun, Ban Chaling, Dakcheung, near Sekong, Lao PDR” by DFAT photo library / CC BY 2.0